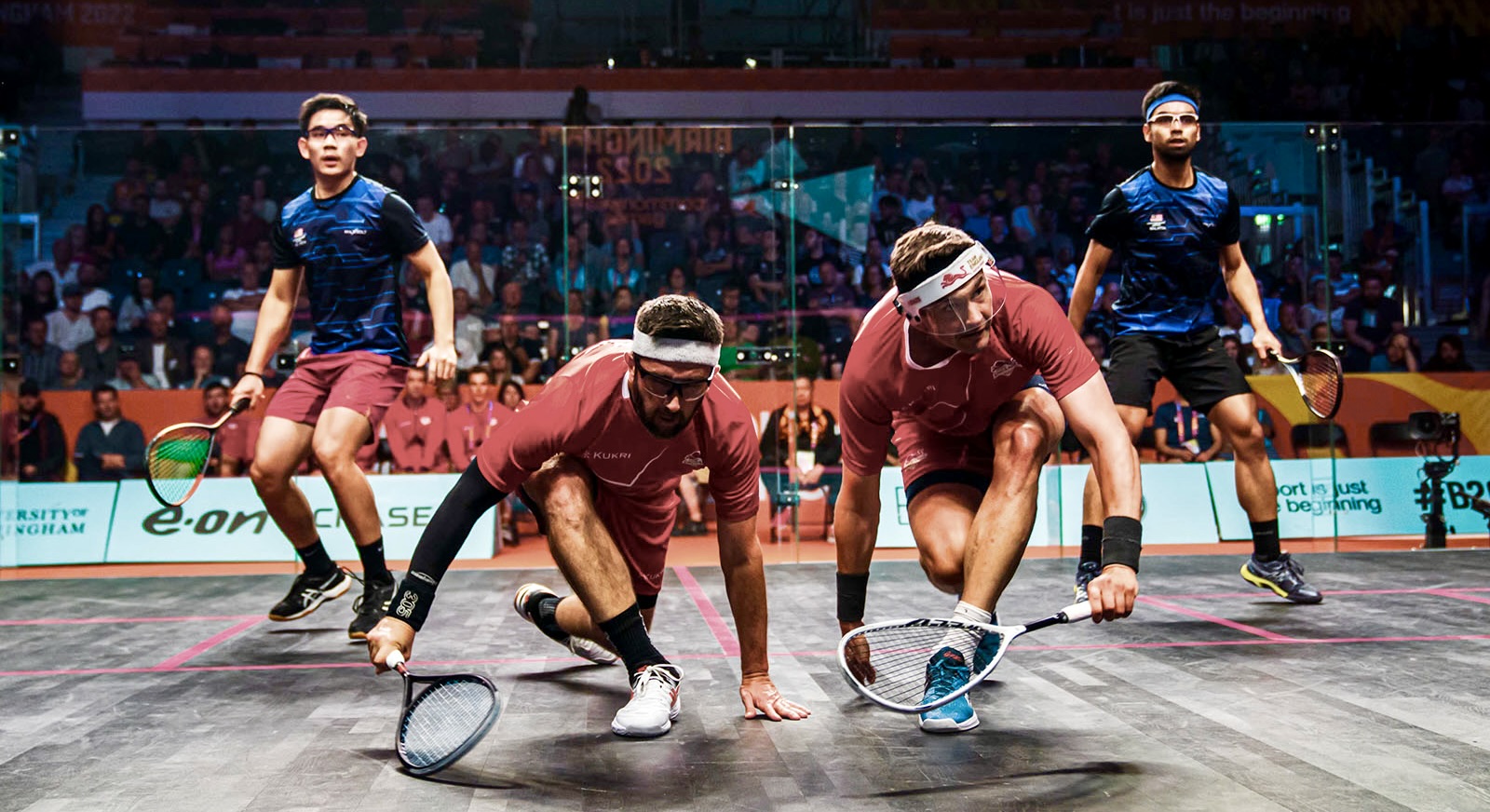 Alison Waters leads Team England into two semi-finals in the Commonwealth Games doubles. She is partnering Sarah-Jane Perry in the women’s doubles and fellow Londoner Adrian Waller in the mixed event.

The two England men’s pairings, top seeds Declan James and James Willstrop, and 3/4 seeds Daryl Selby and Waller, advanced to the quarter-finals with wins over pairings from Malta and Malaysia.

In the mixed doubles, No.2 seeds Waters and Waller recovered from a difficult start to beat Wales’ Tesni Evans and Joel Makin in a crowd-pleasing encounter.

The English pair looked in trouble after the 5/8 seeds took the first game 11-4, but managed to reset well in the subsequent games.

In the second game, play was dominated by Waters and Evans, with Waller and Makin often going entire rallies without touching the ball. This played well into the hands of Waters, who since retiring from the World Tour has forged a reputation for being a doubles specialist, and England were able to level with an 11-8 win.

While the third game began evenly, Waters and Waller soon began to dominate, looking increasingly assured as they moved into a semi-final clash against Australia’s defending champions Donna Lobban and Cameron Pilley with an 11-5 win.

Lobban and Pilley of Australia came from a game down to overcome Lobban’s husband, Greg, and Lisa Aitken of Scotland.

“We won’t be signing any divorce papers after today. We’re still all right,” Donna joked afterwards.

Waters said: “They played really well the whole match. In the first game, we were under the cosh. I’m really proud that we came out with a different plan and (in the third game) we played as well as we could do out there.”

Waters had already been on court earlier in the day when she and Perry overcame stubborn resistance from Scottish 5/8 seeds Georgia Adderley and Lisa Aitken.

The No.2 seeds began quickly and opened up a 6-2 margin, before the Scots reduced the lead to 7-6. In an entertaining end to the game, Waters and Perry were able to move through the gears and choke the Scottish momentum to take it 11-7.

The second game followed a similar pattern, with Perry and Waters coasting at 9-3 up, before Adderley and Aitken put together a brilliant run of points to pull back to 9-7.

Once again, though, the No.2 seeds were able to regain control, with Waters bringing things to an end 11-8 as she fired the ball to the front, beyond the desperate dive of Adderley.

After the match, Perry, who just two days ago overcame Joelle King to win a singles bronze, said: “It’s obviously a quick turnaround from singles to doubles, but I feel settled and pleased, I felt good today.”

Perry and Waters will play Rachel Arnold and Aifa Azman in the semi-finals on Sunday after the Malaysian 5/8 seeds surprised 3/4 seeds Rachael Grinham and Donna Lobban of Australia.

In the men’s draw, Waller again fought back from a game down as he and Selby overcame Malaysia’s Mohammed Syafiq Kamal and Ong Sai Hung 2-1.

The No.2 seeds went down 11-9 in a fast-paced opener, before hitting their stride with 11-4 and 11-7 wins to set up a quarter-final match with 9/16 seeds David Baillargeon and Nick Sachvie of Canada.

Selby, who did not play in the singles competition, said: “It was a bit of a shootout and we knew they were going to be good. We’ve been patient waiting for everyone else to play, but it’s different once on there. There’s a lot of pressure and nerves, but the important thing is that we’re through!”

There was an easier first match of the Games for top seed James and Willstrop, with the pair breezing into the second round with a comfortable 2-0 victory over Malta’s Niall Engerer and Kijan Sultana.

“It’s been a nervous week watching from the bench and watching the team. Inspirational stuff from them and it’s great to be here,” James said.

Malaysia enjoyed a spectacular day as their two women’s doubles teams stunned the top seeds and 3/4 seeds to reach the semi-finals of the Commonwealth Games for the first time in the country’s history.

The 5/8 women’s doubles seeds Rachel Arnold and Aifa Azman had already recorded one of the results of the round when they ended Malaysia’s run of three consecutive quarter-final exits to become the first Malaysian women’s doubles team to reach the Commonwealth Games semi-finals with an impressive 2-1 win over Australian 3/4 seeds Rachael Grinham and Donna Lobban.

Then their compatriots Ainaa Amani and Chan Yiwen captured the headlines with a 2-0 win over Indian top seeds Joshna Chinappa and Dipika Pallikal Karthik.

There were signs of a shock result brewing when Amani and Yiwen stormed into the lead with an 11-2 victory in game one, with the reigning World Champions unable to cope with the determined defence of the Malaysians.

The second game was a stop-start affair, with the Indians becoming frustrated at both their opponents and the referee. After falling 6-3 behind, India appeared to be building momentum and clawed their way back to just 8-7 down. From here, though, the Malaysians dug in impressively and ground out a huge upset with an 11-7 win.

“I’m still in shock,” Yiwen said afterwards. “We just wanted to enjoy the Games because it’s our first outing at a Commonwealth Games and we didn’t expect to go this far. We just hoped that we could continue the momentum and we went out there without any pressure.

“Everyone in the Malaysia squad is in very high in spirits now. It’s good to have two Malaysian teams together to motivate each other and hopefully we can meet in the final. We saw [Arnold and Azman] play in the first session and that really pumped us up!”

Amani and Yiwen will play defending champions and 3/4 seeds Joelle King and Amanda Landers-Murphy after the Kiwi pair navigated their way past England’s 5/8 seeds Georgina Kennedy and Lucy Turmel.

Arnold and Azman, meanwhile, go up against No.2 seeds Sarah-Jane Perry and Alison Waters after they overcame a spirited challenge from Scottish 5/8 seeds Georgia Adderley and Lisa Aitken.

The other mixed doubles semi-final will be contested by Indian top seeds Dipika Pallikal Karthik and Saurav Ghosal, who beat Australia’s Rachael Grinham and Zac Alexander 2-0, and New Zealand’s Joelle King and Paul Coll, who overcame Scotland’s Georgia Adderley and Rory Stewart by the same margin.

In the men’s second round, Indian 9/16 seeds Velavan Senthilkumar and Abhay Singh saved three match balls as they fought from one game down to upset 3/4 seeds Alan Clyne and Douglas Kempsell of Scotland.

The Indian pair looked down and out when they lost the first game 11-8 and trailed 10-8 in the second, but were able to stay ice cold as they levelled the tie with an 11-10 and then powered on to an 11-8 win in the third.

Afterwards, Singh said: “It was a good fight from me and my partner, we’ve grown up together for 15 years.”

More in this category: « - Commonwealth Games: Second gold for Paul Coll as he and Joelle King win mixed doubles final »
back to top