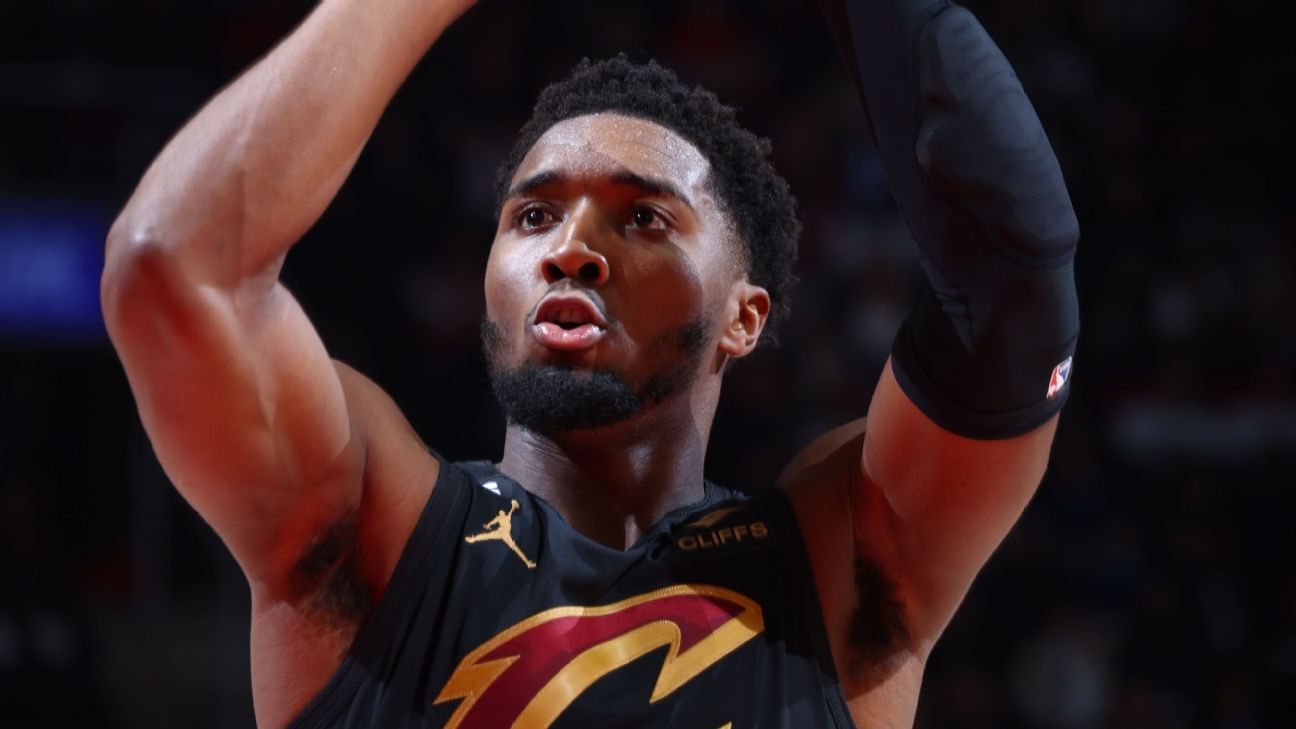 TORONTO -- Donovan Mitchell was everything the Cleveland Cavaliers could have hoped he'd be in Wednesday night's season opener here against the Raptors.

Unfortunately for the Cavaliers, however, little else went their way.

Mitchell's beyond dandy regular-season debut, which saw him finish with 31 points and nine assists in 35 minutes, Cleveland both lost the game, 108-105, to the Toronto Raptors in front of a sellout crowd here at Scotiabank Arena, and also lost Mitchell's fellow All-Star guard, Darius Garland, to a left eye laceration.

"He's comfortable," Cavaliers coach J.B. Bickerstaff said of Mitchell's play Wednesday night. "I think it's that easy. This isn't something he hasn't done before. He's carried teams on his back so he understands the moment and he's capable of it. It's not new, and it's what we expected from him."

Mitchell eased into the game as it went along, getting his first basket on a transition layup early in the first quarter, before making a runner a few moments later. From there, he allowed his teammates to try to get some shots and get themselves going, before asserting himself more as the action progressed.

That ratcheted up in a big way, however, when Garland went to the ground after being accidentally hit in the face by Raptors guard Gary Trent Jr. late in the second quarter, putting a heavy burden on Mitchell's shoulders to run Cleveland's offense.

"That's the big thing playing with a bunch of good guys, trying to find your spots, especially against a team like Toronto," Mitchell said. "You don't want to come in full bore, that's how they want to turn you over. And then [Garland] goes down so I'm on the ball more, directing traffic."

He had little trouble sliding into the role he's filled so many times over the first five years of his career with the Utah Jazz, however, as Mitchell produced up 18 of his points and five of his assists after halftime.

"He's an elite basketball player. There's not many guys in this league that are better than Donovan or are capable of doing the things eh can do. He puts so much pressure on the defense, he has the ability to make all the passes, so again that's, he's hard to deal with but he makes defenses have to make tough decisions over and over again."

Still, as the Raptors went on a 13-2 run late in the fourth quarter to erase a five-point Cleveland lead and pull ahead for good, Mitchell showed signs of inexperience with his teammates, including a couple of miscommunications with All-Star center Jarrett Allen.

As the two of them were walking to the podium, they were breaking down what happened on one of those mistakes -- part of what Allen said was a natural growing process as new teammates all learn how to play off one another.

Despite the loss, the mood around the Cavaliers was positive, as they spent more than half the game playing without Garland and it was the first time Mitchell had shared the court with rising star big man Evan Mobley.

And, Mitchell said, it was a good building block for Cleveland to improve upon moving forward.

"I think we did a good job," Mitchell said, "but we can do an even better job, as a group."