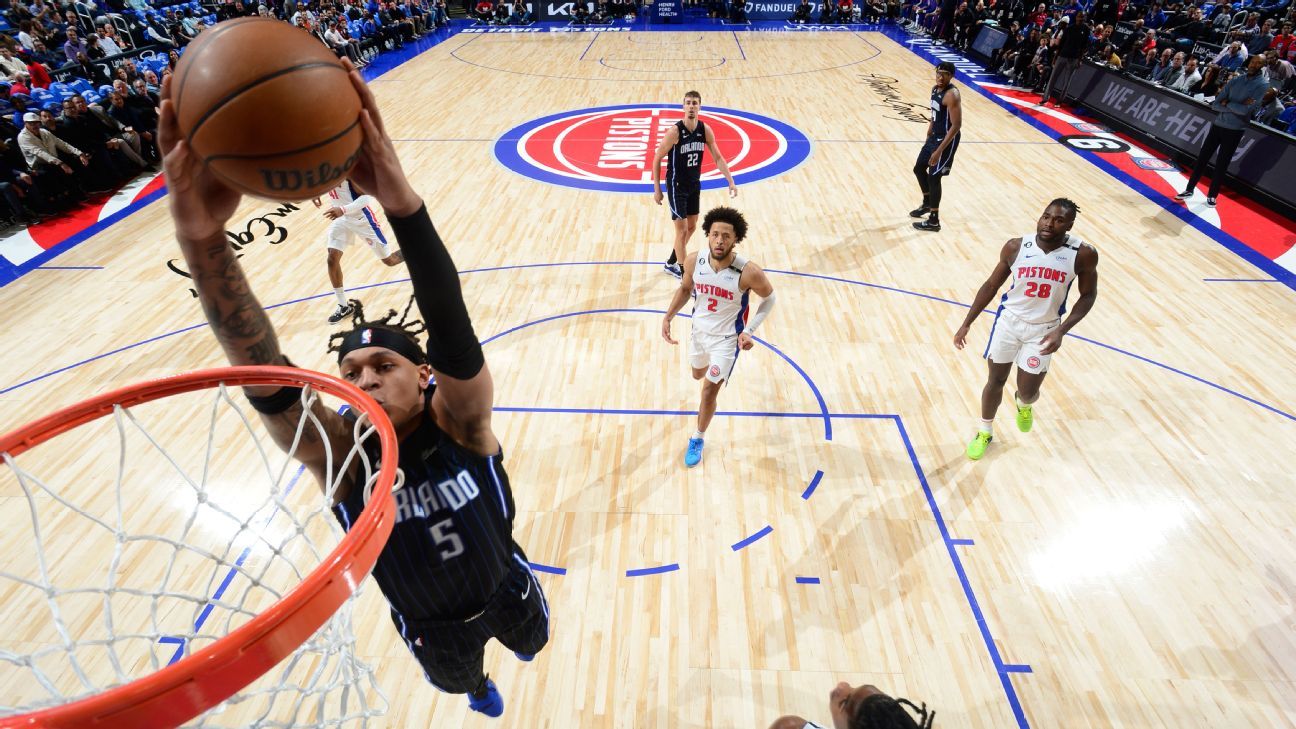 DETROIT -- Orlando Magic rookie Paolo Banchero collected 27 points, nine rebounds and five assists in his NBA debut on Wednesday night, a 113-109 loss to the Detroit Pistons, making him the first rookie with 25-5-5 in his debut since LeBron James in 2003.

"It means a lot, I guess," Banchero said after the game. "Obviously, would have liked to win, but I just wanted to play hard, play for the team and that happened, so it's a blessing."

Banchero, the No. 1 pick in the 2022 NBA draft, made an impact on this contest right away. He scored Orlando's first four points of the game and finished the first quarter 3-for-3 on field goals for seven points. He was even better in the fourth quarter as Orlando tried to mount a comeback, going 5-for-8 for 13 points, including a ferocious one-handed dunk over Pistons guard Cory Joseph, who attempted to draw a charge.

"It's crazy," Banchero said. "I felt like I left a lot of points on the board."

"Credit to my teammates for finding me. It's always nice to see the ball get in that early, get easy buckets around the rim. That's how I try to play, inside out. Try to get easy stuff around the basket and expand out and do more stuff throughout the game."

Before boarding the flight from Orlando to Detroit, Banchero said he tried to reflect in the moment before his first official NBA game to not allow himself to get caught up during Wednesday's action. This matchup between the Pistons and Magic featured a collection of former top draft picks, including Pistons guards Cade Cunningham, the 2021 No. 1 pick, who finished with 18 points and 10 assists, and Jaden Ivey, the 2022 No. 5 pick, who scored 19 points with four assists and three steals in his debut.

Orlando had three players age 21 or younger -- Banchero, Jalen Suggs and Franz Wagner -- score 20 points, the first team in NBA history to do so in a season opener.

"We're both super young, we're both trying to find our way to the top of the league," Cunningham said about the Pistons and Magic. "This was a big game for us to set the tone as far as that matchup. We're going to be seeing them a lot for years to come."

However, Banchero, 19, was the game's leading scorer, scoring the most points by a No. 1 overall pick since Allen Iverson scored 30 points in his debut in 1996.

"He handled himself very well," Suggs said. "He got to his spots. He ran in transition. He was physical. He boarded. He made the right play when it was there. Paolo did a fantastic job tonight. We're going to continue to ride with him; we're going to continue to grow and moments like this are important for us. We got to be in this to grow and he showed us a lot tonight."