The optimal roster around Joel Embiid? The 76ers feel they've found it 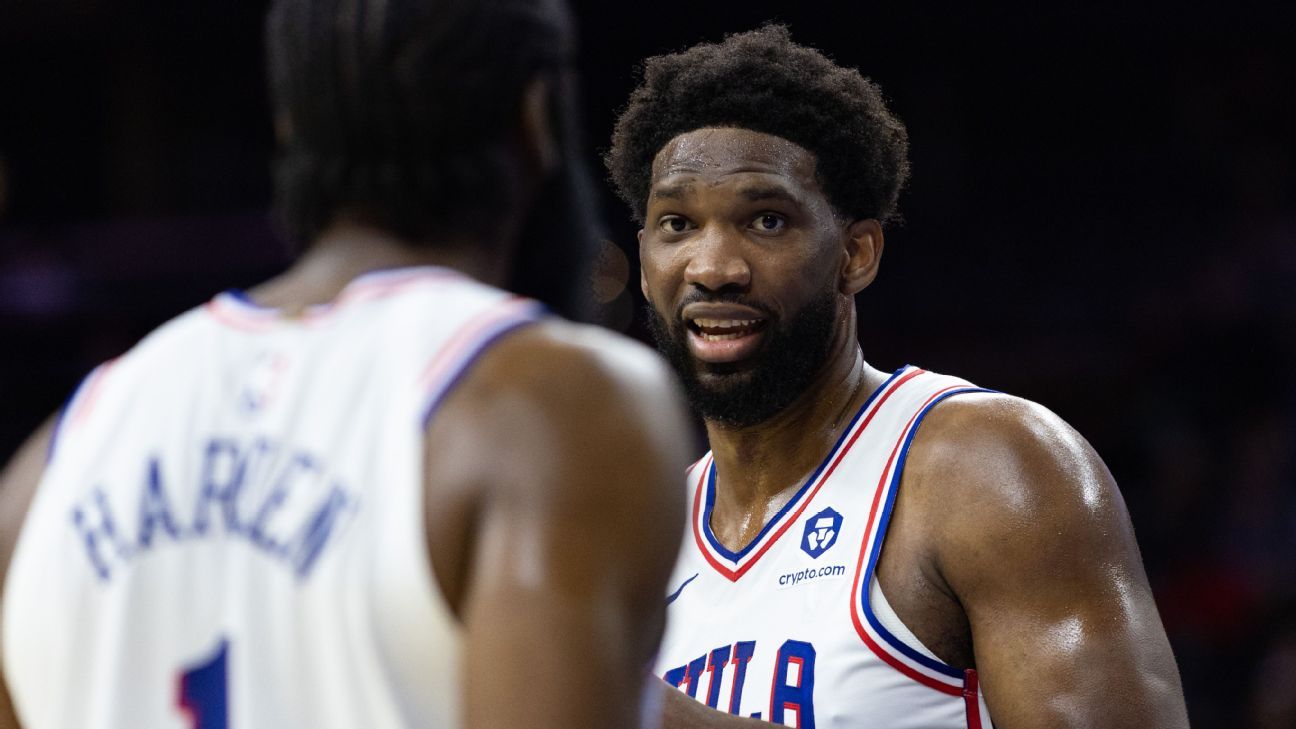 INSIDE MCALISTER FIELDHOUSE on The Citadel's campus in Charleston, South Carolina, all eyes are fixed on a conversation between Joel Embiid and P.J. Tucker.

For the second straight day of training camp in late September, the new Philadelphia 76ers teammates engaged in a long -- and loud -- discussion over basketball tactics. Among today's topics: How Tucker and the Miami Heat suffocated Embiid in the post during last season's Eastern Conference semifinals.

Tucker gestures how he fronted Embiid in the paint -- doing everything he could to make his life difficult before he even got the ball in his hands -- and ways Embiid could counter.

"Every day [we work on] ways to combat everything he does," Tucker said. "And me guarding him now and trying to help him out, understand the reads of what people want to do, that's what it's about.

"It's knowing that, and being ready for it all."

Tucker's not alone. For the past several years, the 76ers have tried to optimize Embiid's prime with hopes of deep postseason runs. But each time, flawed roster constructions have prevented the kind of breakthrough that normally follows a perennial MVP finalist.

There was Embiid's ultimately doomed partnership with Ben Simmons, a point guard whose lack of a reliable jump shot forced the 76ers to build offenses in which pick-and-rolls -- the lifeblood of the modern NBA -- were rare occurrences.

There was the disastrous yearlong pairing with fellow big man Al Horford, the player who gave Embiid fits for years with the Boston Celtics and gave him almost as many as a teammate.

And there has been a series of one-way players over the years, from Matisse Thybulle and Seth Curry to Marco Belinelli and T.J. McConnell, who have helped win plenty of regular-season games but are the kinds of targets -- at one end of the floor or the other -- that Eastern Conference playoff teams routinely exploited.

This summer, the 76ers were determined to change that. They re-signed superstar and elite pick-and-roll partner James Harden at a discount big enough to also land free agents Tucker and Danuel House Jr., two rugged defenders who can knock down open 3-pointers.

Philly traded injured guard Danny Green and a first-round pick to the Memphis Grizzlies for De'Anthony Melton, adding another high-octane perimeter defender to a roster that lacked them last season.

Philadelphia enters its first full season with one of the best pick-and-roll tandems in the league, quality 3-point shooting to give Embiid ample space to operate and enough versatile defenders to attack opponents.

Put it all together, and the 76ers -- despite a rocky first impression Tuesday -- are deeper, more balanced and better constructed around their 7-foot anchor than at any point in The Process era.

"There's no weak links around the horn," Tucker said. "You want to [pick on] somebody? Go ahead. We got everybody."

SIMPLY BREAKING THROUGH to the East finals -- a feat the 76ers haven't accomplished in more than 20 years -- means nothing to Embiid.

"The whole notion of getting to the first round, second round, conference finals, Finals, that don't matter," Embiid said. "If you don't win it all, it doesn't matter why you lost. It probably makes it even worse ... you feel like you just frickin' wasted time.

Some of those failures can be attributed to untimely injuries to Embiid: an orbital bone fracture colliding with a teammate in 2018 and facial fracture and thumb injuries suffered last spring. One playoff defeat can be blamed on the Toronto Raptors and Kawhi Leonard, whose miracle four-bounce buzzer-beater in Game 7 stunned the 76ers in the 2019 East semifinals.

But much of the burden falls on a poor design -- namely, various roster constructions surrounding Embiid: the awkward fits with Simmons or Horford, the accumulation of too many limited role players or even the decision to move on from Jimmy Butler after that heartbreaking loss to the Raptors.

No matter what formula Philadelphia tried, the result was the same: an early playoff exit. Changing the fit around Embiid, and in turn changing the 76ers' playoff fortune, has been president of basketball operations Daryl Morey's mission since he was hired by the franchise two years ago.

After the collapse against the Atlanta Hawks in 2021, and the subsequent trade request by Simmons, Morey bided his time before moving on the Simmons-Harden swap in the final hours before the February trade deadline.

It didn't take long for the two stars to begin to find chemistry.

Embiid and Harden ran the second most pick-and-rolls in the league after the All-Star break, with only Hawks duo Trae Young and Clint Capela accounting for more. Philadelphia's star tandem averaged 1.15 points per direct pick on those plays, per ESPN's Stats & Information research -- the fifth-best mark among the 39 pairings that ran at least 150 such plays.

Harden's arrival raised Philadelphia's ceiling, but it wasn't enough on its own to change the franchise's playoff fate. Harden, who has infamously flamed out in numerous playoffs, had his struggles for the 76ers, including a 4-for-9 stinker in Philadelphia's season-ending Game 6 loss to Miami last season.

Morey identified another issue: 76ers coach Rivers was hamstrung by too many specialists surrounding his stars.

"[What] we saw in the playoffs was our inability to play both ends," Morey said. "Like when Doc had to go to the bench, it was choosing all offense, no defense or all defense, no offense.

"That gets pretty challenging in the playoffs."

It turned out, however, that both Morey and Embiid had a similar solution in mind. Enter Tucker, a versatile lockdown 3-and-D wing who had been part of the Houston Rockets with Morey and Harden for several seasons. After that Game 6 loss, Embiid said he'd never played with someone like Tucker before, citing his defensive energy and toughness.

Tucker, Melton and House have supplanted Thybulle, Shake Milton and Furkan Korkmaz -- three players who got significant minutes during the playoffs last year -- in Philadelphia's rotation.

"I do think Joel set the tone very helpfully for my negotiations [with Tucker]," Morey said with a laugh. "Asking for a specific player ... I would ask all future 76ers to please don't do that."

EMBIID HAS ECHOED a similar retort whenever referencing the hype surrounding the 76ers' revamped roster in the lead-up to the season.

Tuesday, when Philadelphia opened its season with a 126-117 loss inside TD Garden against the defending East champion Celtics, Embiid's words of caution proved prophetic.

The Celtics, playing without injured starting center Robert Williams III, beat the 76ers with the quickness created by their smaller lineups. Boston outscored Philadelphia by a 24-2 margin in fast-break points -- a disparity so staggering that Embiid double-checked it on the box score during his postgame news conference.

"It starts defensively," Embiid said. "Really, it's all about defense. We scored, whatever, 117 [points], and we were not good offensively today.

"We didn't get any stops all night. So, that's where it starts. I think we've got potential. But every possession we've got to play hard, and have each other's backs."

There were flashes of optimism for Embiid and Philadelphia. Even with the elite defenders Boston can throw at teams -- including reigning Defensive Player of the Year Marcus Smart -- Harden and Embiid found success operating in the pick-and-roll.

Late in the second quarter, Harden came around an Embiid pick and dropped a pocket pass that Embiid caught and finished over a fouling Celtics forward Noah Vonleh. On another play midway through the third, Harden came around another screen and expertly faked the defense into giving up a wide-open floater.

"We've got to find ways to get into that action more," Harden said postgame.

Embiid bemoaned the ball sticking too much and the 76ers falling into old habits. He was right to: According to Second Spectrum, Philadelphia had a 3.5-second average touch length against Boston, the team's third-highest mark in a game since the start of last season.

Still, despite how ugly things looked for Embiid and the 76ers Tuesday night, he and Celtics stars Jayson Tatum and Jaylen Brown all had the same message: It was the first of 82 games.

But while it was the first of 82 for a battle-tested Celtics core coming off an NBA Finals appearance, it was the first regular-season action for Philadelphia's revamped roster -- an experience gap Embiid said only time can shrink.

"That's a team that just went to the Finals, and they've been together for so many years," Embiid said postgame. "We still felt new, with a lot of new guys trying to find the right fit and the right way to play.