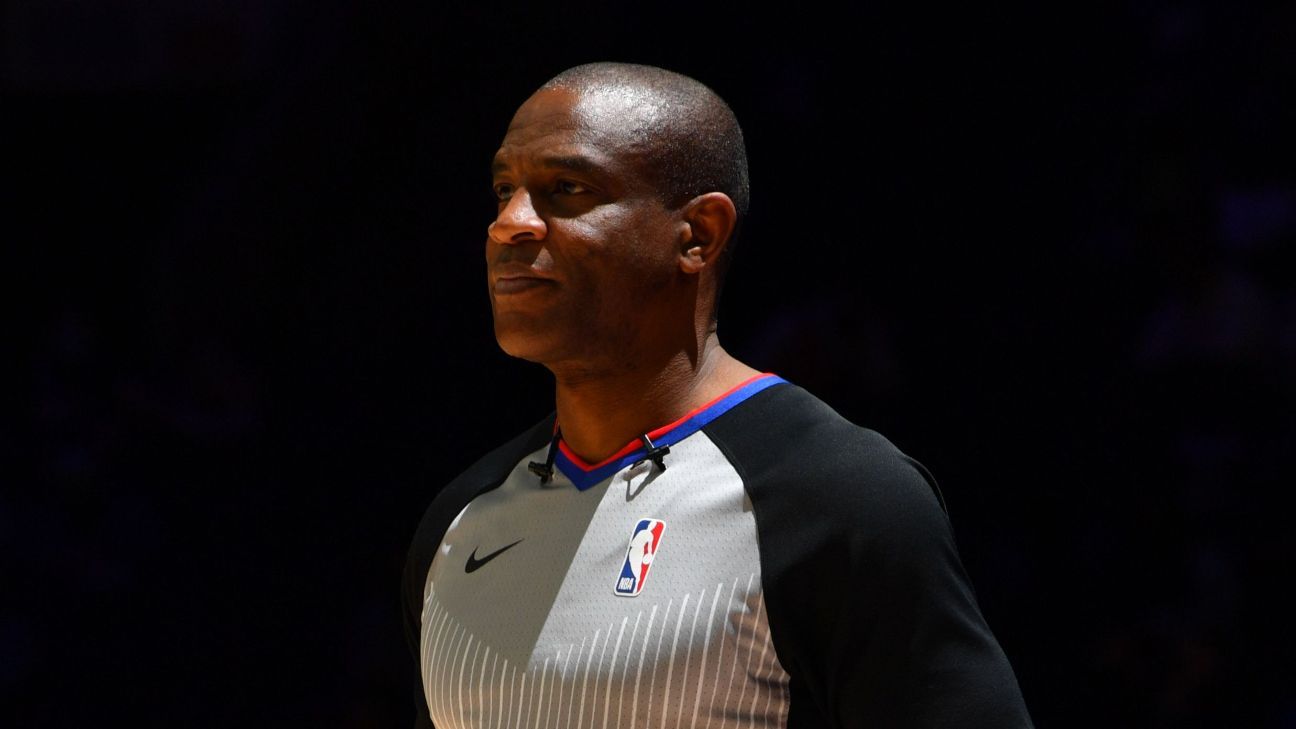 Tony Brown, who officiated more than 1,100 NBA games over almost two decades, has died after a battle with pancreatic cancer, his family announced Thursday. He was 55.

Brown was diagnosed with Stage 4 pancreatic cancer in April 2021 and recovered to the point where he was able to return to work in the NBA replay center last season. He entered hospice care in Atlanta in recent days, his family said.

"We are and have been sustained by the consistent outpouring of love and support through this journey in developing strength, acceptance and peace," Brown's family -- his wife, Tina Taylor-Brown and their children Bailey, Basile and Baylen -- said in a statement. "We ask that you join us in that spirit as we prepare to celebrate Tony's life. Our biggest thank you to our village of family and friends, near and far, old and new. Your love is immeasurable."

Brown was selected to officiate a pair of NBA All-Star games, plus worked a game in the 2020 NBA Finals between the Los Angeles Lakers and Miami Heat. He also worked championship-round games in the CBA and WNBA, plus was a WNBA All-Star official before moving to the NBA in 2003.

The native of Tallahassee, Florida, was diagnosed after experiencing some stomach discomfort, which he initially attributed to what he thought was bad sushi. After more than a dozen rounds of intense chemotherapy, Brown was feeling well enough to return to work -- with the blessing of his medical team, the NBA and his family.

"I haven't had time to sit around and be like 'Why me?' or 'What am I going to do?'" Brown told The Associated Press earlier this year. "Me not fighting would have made me feel like I was letting people down. What kind of example was I going to be to my kids if I just laid in this bed and let it overtake me? I had to show my kids that there's nothing in life that you can't challenge and overcome if you have a positive mindset."

Such was his life's story. He embraced challenges.

A talented high school basketball player, Brown accepted a scholarship to Florida A&M before eventually deciding to transfer to what was then called Clark College -- now Clark Atlanta University. No scholarship was available there for him, so Brown worked his way through school as an employee of Delta Air Lines. He cleaned planes, drove passenger carts, then became a flight attendant and remained employed by Delta until retiring in 2007.

By then, his NBA career was in full bloom. He worked the 2018 All-Star Game in Los Angeles, then was picked to work the 2021 game that was moved to Atlanta. His fellow referees for that 2021 game were fellow Atlanta residents Tom Washington and Courtney Kirkland -- who, like Brown, were graduates of historically Black colleges and universities, and that game was one in which the NBA committed to showcasing HBCUs and raising more than $3 million for scholarship funds.

"The most important part about this entire game, for us, is that we are representing the NBA officials and we have to do an outstanding job for them," Brown told AP before that game. "Every night that we go on that floor we are representing each other. And that's the greatest accolade and accomplishment that we can ever have, doing our job."

Even in the final days of his life, Brown's focus was on others. His family and friends worked feverishly to fund a scholarship for Clark Atlanta players in the days before his death. Earlier this month, some Clark Atlanta players visited Brown in hospice and presented him with a jersey as a thank-you for his efforts.

Attorney Mawuli Davis, one of the primary organizers of the scholarship effort, said the family is still chasing the $100,000 goal and hopes to present a check for that amount to Clark Atlanta at its men's basketball season-opener Nov. 7.

"Tony Brown embodies everything it means to be a Clark Atlanta basketball player," Clark Atlanta coach Alfred Jordan said. "His hard work, determination, and perseverance are what set him apart from the rest because those qualities are hard to come by these days."

Brown also inadvertently was part of a historic night in the NBA.

On Dec. 30, 2020, San Antonio coach Gregg Popovich was livid that no foul was called on a drive by DeMar DeRozan, who was then playing for the Spurs in a game against the Los Angeles Lakers. Brown ejected Popovich for his outburst, and Popovich pointed to then-Spurs assistant Becky Hammon to take over.

With that, Hammon became the first woman to direct a team in NBA history.

Earlier that year, Brown made what was his lone on-court appearance at the NBA Finals. He was in the league's restart bubble at Walt Disney World for several weeks and said when he got the word that he was one of the 12 referees picked for the title series his mind immediately went to how his family would react to the news.

"I was speechless when I found out," Brown said at that time. "The first thing I went through was the sacrifices that my family made to stand by my side during this journey. I was more happy for my family than anything else."

In addition to expressing appreciation for his caregivers, Brown's family publicly thanked The Lustgarten Foundation and PanCan, an organization dedicated to fighting pancreatic cancer, along with the NBA and the National Basketball Referees Association for their support.

"Keep striving for the cures," his family said.