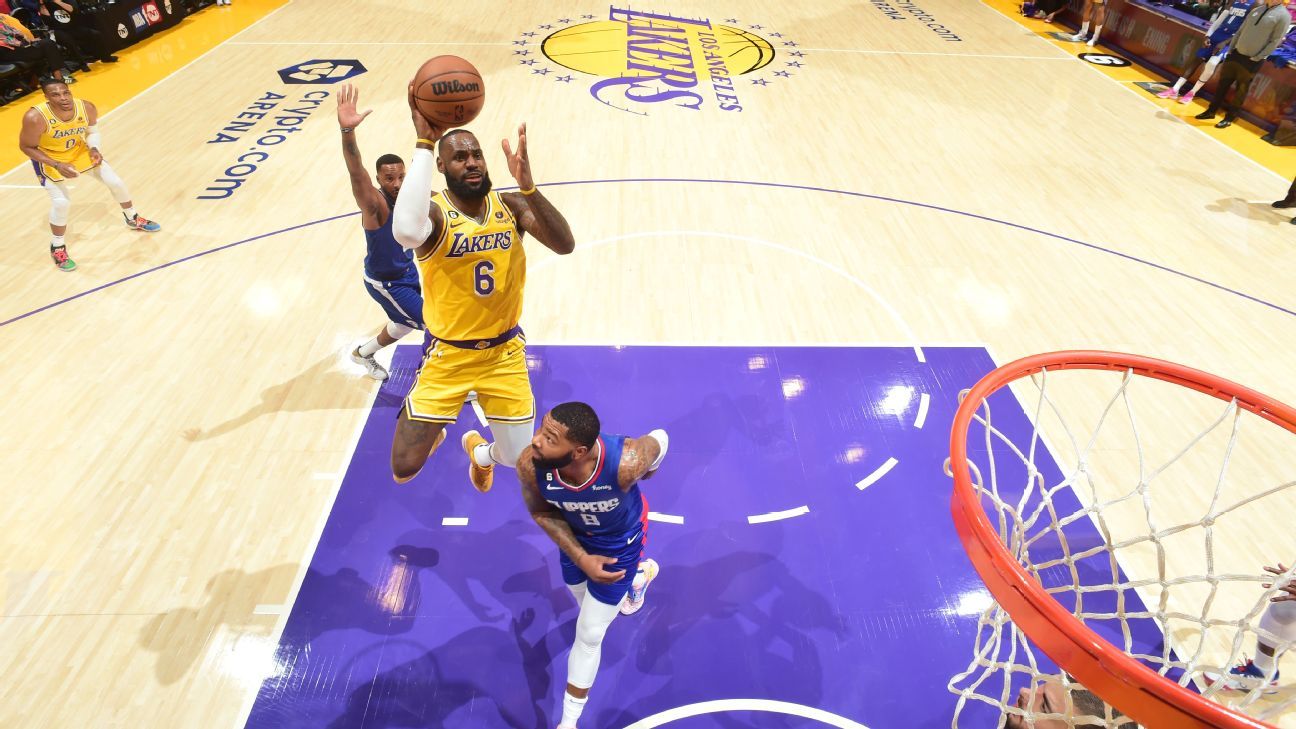 LOS ANGELES -- The Lakers can't hit outside shots. That much is clear after L.A. shot 9-for-45 from 3 in Thursday night's 103-97 loss to the Clippers. That total somehow managed to be even worse than the Lakers' 10-for-40 clip from deep in their opening-night loss to the Golden State Warriors.

Yet while LeBron James bluntly lamented his team's lack of "lasers" on the roster after the Warriors game, he did not add to that refrain Thursday, even after the Lakers went 0-for-9 on 3-pointers in the fourth quarter.

"I'm definitely not going to sit here and harp on what we can't do every single game," James said when asked about his team's mounting misses. "That's not a leader. What I know we can do? We can defend our ass off. We did that tonight, which gave us an opportunity to win and we just couldn't make it happen. But, I'm OK with that."

The Lakers held the Clippers -- one of the oddsmakers' favorites to win the NBA title -- to just 103 points and 80 total shots, with the Lakers' on-ball pressure helping force the Clippers into 22 turnovers.

James assured reporters that L.A.'s shooting would improve but added that it will not be the winning formula the team leans on.

"If we're reliant on [sufficient outside shooting] every single game, then we're in trouble," James said. "So I'm not worried about that or thinking about that. It's how hard we play, how aggressive we play, how determined we are to go out and compete every night. And we got to defend. When we defend, we're going to give ourselves a good chance to win."

There was an acknowledgement throughout the team that the Lakers shot themselves in the foot by being so off, but they cannot shy away from open looks.

"Don't let missed shots take away your confidence," said Anthony Davis, who was 2-for-4 from 3 while the rest of L.A.'s starters were 5-for-29. "Keep shooting it, be confident in your shot. And they're going to fall. Ain't nothing you can do but keep shooting."

Coach Darvin Ham said the Lakers' analytics department determined the team had more quality shot attempts by their metrics than any of the other three teams that played on opening night, adding to his belief that they are the shots his team is supposed to take.

Ham was asked after the game whether the shots might be open because opposing defenses are packing the lane to cut off driving opportunities and daring the Lakers to shoot.

"And, again, we see these guys making shots in practice and shootaround. They got to do it on the game floor. It's as simple as that."

Lakers guard Russell Westbrook had a particularly difficult shooting night Thursday, going 0-for-11 overall (including 0-for-6 from 3), but even his night was defended by James.

Westbrook, who finished with five steals, four assists and just one turnover aside from the missed shots, also looked ahead to the next game against the Portland Trail Blazers when asked to assess his performance.