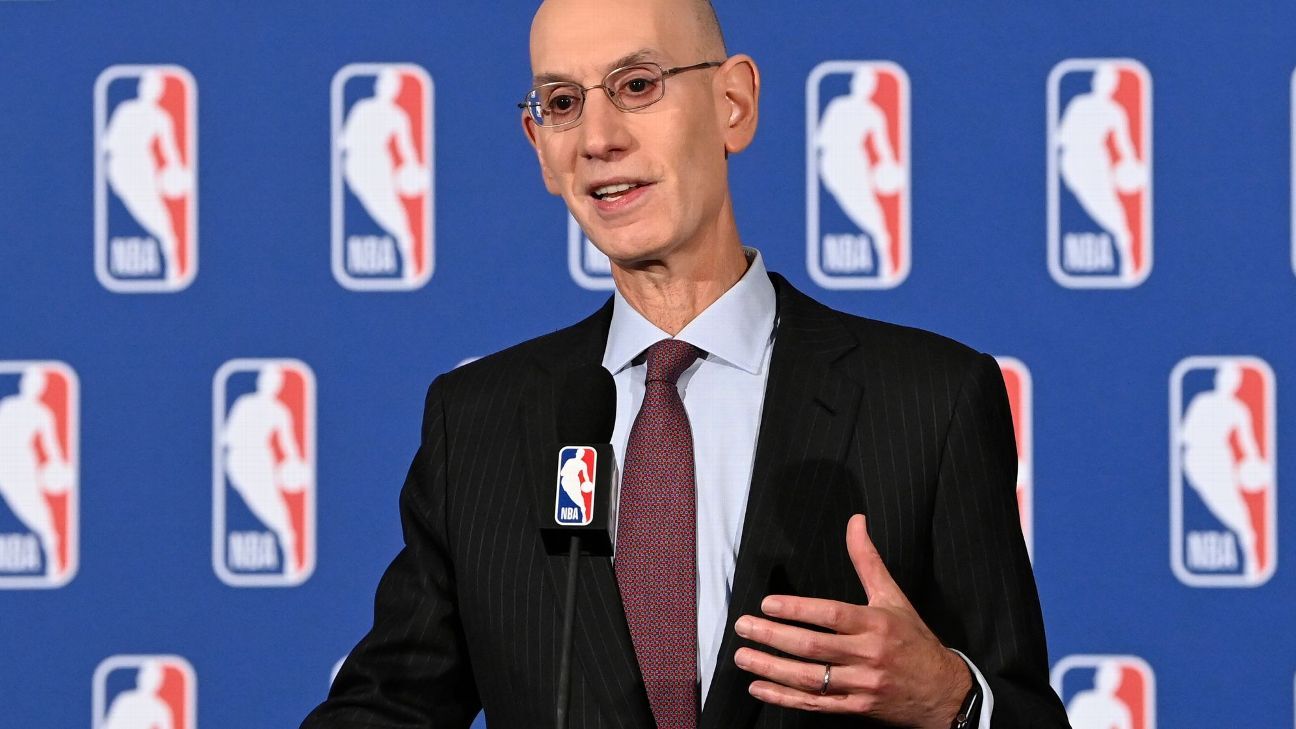 In an interview with ESPN's Malika Andrews on "NBA Today," NBA commissioner Adam Silver said that he believes the changes the league has made to its system in recent seasons, from flattening the lottery odds to adding the play-in tournament, have greatly reduced the incentives for teams to tank for high-profile prospects, including French phenom Victor Wembanyama.

"You're dealing with a 14% chance of getting the first pick," Silver said. "I recognize at the end of the day analytics are what they are and it's not about superstition. A 14% chance is better than a 1% chance or a no percent chance. But even in terms of straightforward odds, it doesn't benefit a team to be the absolute worst team in the league, and even if you're one of the poor-performing teams, you're still dealing with a 14% chance [of winning the lottery].

"It's one of these things where there's no perfect solution, but we still think a draft is the right way to rebuild your league over time. We still think it makes sense among partner teams, where a decision was made where the worst-performing teams are able to restock with the prospects of the best players coming in. So we haven't come up with a better system."

Last week, Silver spoke to employees of the Phoenix Suns in the wake of the findings of the investigation into the conduct over the past two decades of team owner Robert Sarver and his eventual decision to sell his stakes in both the Suns and the WNBA's Phoenix Mercury. ESPN's Baxter Holmes reported, as part of that conversation, that Silver said the idea of relegation has been previously discussed by the NBA as one possible solution to give teams an incentive to compete.

But as part of his interview Monday afternoon, Silver said there is no realistic way for that system to be put in place in the NBA.

"I can't say I was deadly serious about relegation, because we don't have the same system as European soccer and it would make no sense to send an NBA team to the G League or a G League team to the NBA," Silver said.

"But obviously that is how other leagues deal with situations like this where they force teams to stay competitive because the consequences of finishing at the bottom of the league are dramatically detrimental to the health of the team. But it's something as I was saying to the folks in Phoenix that we keep our eye on. We understand we are selling competition to our fans."

With regard to another hot-button topic in NBA circles these days -- the prospect of expansion -- Silver said jokingly that "word traveled fast" when LeBron James said earlier this month that he hoped to one day be part of the ownership group of an expansion team in Las Vegas. But while Silver said expansion will be back on the table again in the future, he reiterated his prior stance that the league wants to get through both the upcoming collective bargaining discussions with the National Basketball Players Association -- both sides can opt out of the current deal by the end of this year -- and its new television rights deal, which should be wrapped up in the next year or so ahead of the current deal expiring in 2025, before eventually shifting back to expansion.

One thing that is front of mind for Silver is the status of WNBA star Brittney Griner, who remains in custody in Russia as she has been since February. Silver said that, after the NBA was initially told not to put a bigger spotlight on Griner's story, he and the league have been doing everything possible to try to bring her back to the United States.

"[We] have been very public about our belief that she deserves to be released at this point," Silver said. "Even to the extent she was convicted of a minor crime, any punishment at this point is dramatically disproportionate. There should be mercy, of course, for anyone in her position, and we've had direct conversations with the White House, with the State Department, you heard opening night, Steph Curry spoke out about her incarceration ... to be quite honest, we are doing everything we know available to us, which is to continue to raise her profile and have direct conversations with the U.S. government on all levels.

As for the reason Silver was in Phoenix speaking to Suns employees, he said he understood having a system that, in part, has a need for employees to call an anonymous tip line "isn't going to work for everyone." He added that there needs to be an emphasis on training and ongoing dialogue with team employees to ensure that the proper climate is in place within NBA teams to ensure all employees are being treated in the way they deserve to be.

"One of the things we've begun doing this year is having direct conversations with the human resources groups at every team to ensure proper training is in place, that teams can have their own systems of hotlines and things, even independent of what the league does," Silver said. "[We are] talking about these issues regularly with our board of governors, who ultimately oversee all of our teams, bringing heightened attention to issues around diversity and inclusion, and our teams being part of that is being true to the data, continuously talking about what we are seeing in our teams in terms of hiring practices, who is in positions of leadership.

"Our goal is to operate under best practices, not uniquely to the NBA or for a sports league but for whatever best of class is in industries, and that's something we're learning about all the time, and we have professionals focused on it."