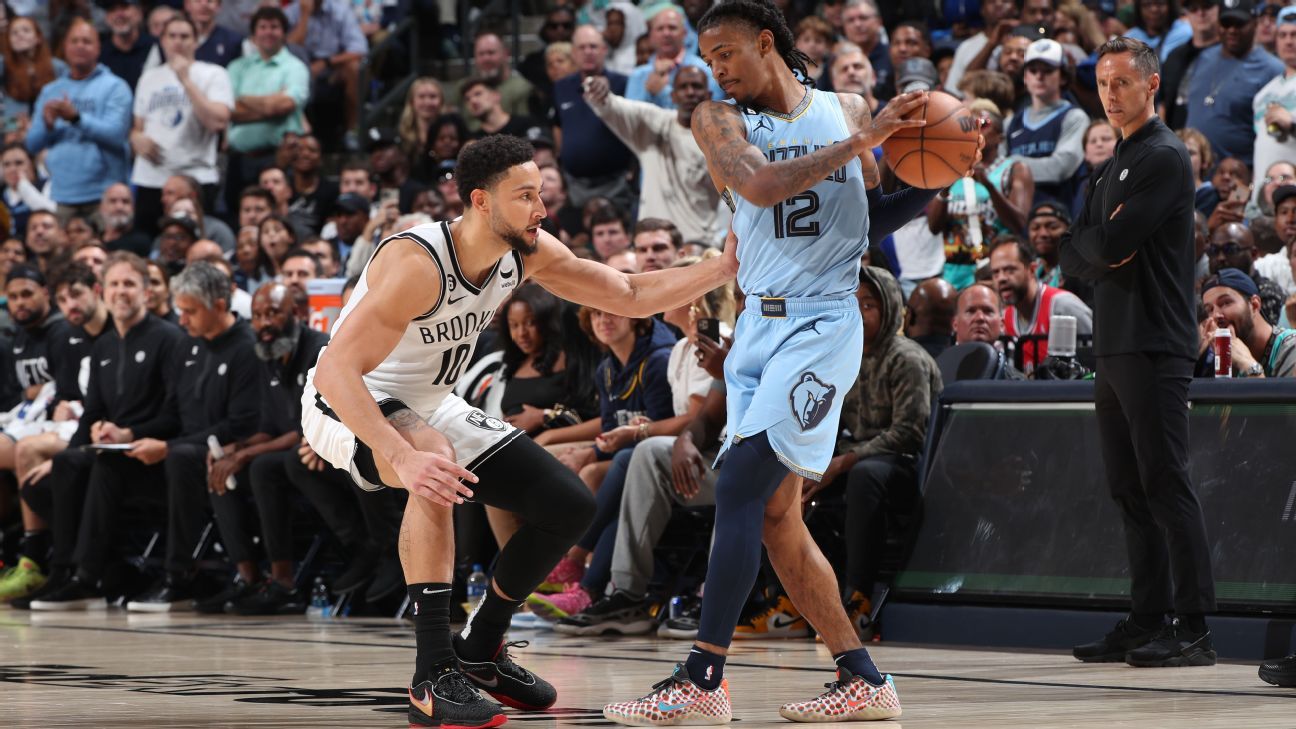 While Simmons, who fouled out for the second time in three regular-season games, was frustrated with many calls, the one that drew most of his ire was his sixth foul, called by official J.T. Orr with 3:52 left in regulation. Grizzlies guard Ja Morant slowly let the ball roll up the floor then collected it and stood there waiting for Simmons to make a move. Once Simmons came closer to Morant -- who was standing a little over the half-court line -- and made contact, Orr blew the whistle that ended Simmons' night. Both Simmons and Nets coach Steve Nash were in disbelief.

"I just saw the play," Simmons said after the game. "It wasn't a foul. [Orr] called it a foul, made a mistake, it is what it is ... it's really frustrating ... it's not a foul, but it was bulls---. It's frustrating because it's late game, fourth quarter, it's a physical, close game. It's the NBA. It's not college. It's not high school. Some people are going to get hit, some people bleed; it's basketball."

Simmons, who also received a technical foul in the first quarter, said he was given "no explanation" from the officials.

"There was no explanation for that call," Simmons said. "[Orr] didn't have anything to say. Same as the technical foul. He said because Ja had a tech, he had to give me a tech because I said something. It wasn't malicious. It wasn't at the referee. I thought it was just a part of basketball. People have emotions. I didn't cuss at him. I didn't call him anything. I just said it was a bulls--- call, which it was, and f---, let me get out of here. I just don't want to get fined."

Morant, for his part, explained to reporters how he baited Simmons into fouling out. He learned from a similar play that Simmons pulled several years ago.

"If y'all want to go dig up a play, I think my rookie year I was in Philly -- and the same situation happened like that versus Ben in the first half," Morant said. "I went to look at Coach to get the play, and [Simmons] ran through the ball, got the steal and went to dunk ... I knew it at that moment. Once I seen him and I was rolling the ball and I was at half [court], I looked at Coach and I see him try to like, 'Oh yeah.' So I knew I had him. He was going to press up, and I was just going to force the ref to make the call."

Simmons said he was a little "confused" by the way the officials called the game given the physical style of play the Grizzlies are known for.

"One way you're expecting a team to play physical and then you come out on defense and play the same way, physical -- it goes one way in terms of fouls, but that's basketball," Simmons said. "You got to adjust, and I don't think we adjusted well."

Simmons finished the night with 7 points, 8 assists, 3 rebounds, a steal and 5 turnovers in 28 minutes. It was a step back for the 26-year-old player who is still trying to find his rhythm after missing almost a year and a half.

"I think rust," Nash said of what he feels is hampering Simmons most right now. "I just don't think he's played a lot of basketball. So he's just trying to get his game back, his confidence and the familiarity. It's been 18 months, basically, so that's a long period of inactivity. For anyone that's played the game, you know that's very difficult."

Nash said that while he feels there will be "painful moments" for Simmons, he remains confident that the former All-Star will find his way. Nash reiterated what he has said several times recently in that he wants Simmons to be more aggressive offensively, which Nash said he believes will help the swingman's overall game.

Nets star Kevin Durant said he didn't believe that last foul should have been called on Simmons, either, but that he knows calls usually even out over the course of a game.

"I didn't think that one was a foul, but it is what it is," Durant said. "Ben's a veteran in this league, so he trusts himself, we trust him and it's just about bouncing back next game."

Nets guard Kyrie Irving said the Nets just have to trust in Simmons' professionalism and help him overcome the emotional hurdle of foul trouble. Simmons also fouled out of a preseason game earlier this month in just 13 minutes.