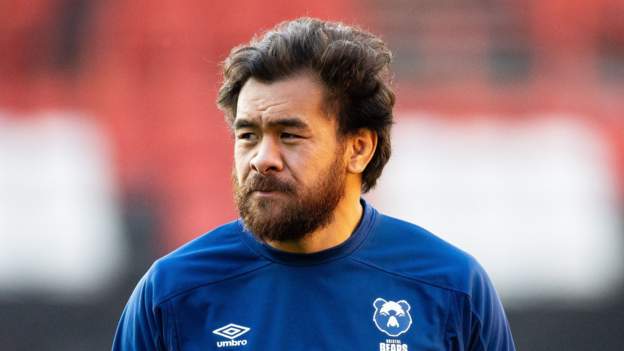 Charles Piutau and Steven Luatua are available for Bristol after recovering from injuries in time for their Premiership fixture away at Sale.

Luatua has not played since suffering a calf injury during pre-season.

Semi Radradra will be available for the visit of Leicester on 3 December after recovering from knee surgery that has kept him out since April.

However captain Joe Joyce has been ruled out until at least the new year with a shoulder injury.

"Charles is back now after his injury with his nose," director of rugby Pat Lam told BBC Radio Bristol.

"Stevie Luatua finally, he's been sitting on 99 games, it was supposed to be 100 against Bath in round one, finally gets a chance to get out there for his first game of the season which is exciting. He's good to go.

"Semi is not far off, Semi will be available next week against Leicester."

Back-rower Piutau has made six league appearances for the Bears this season, the last of which came on 29 October when he went off injured against Northampton with a broken nose.

Bristol are 10th in the table and without a win in their last five Premiership matches, and Lam said the return of experienced players is providing a boost.

"Just their presence in the team, they're game smarts, their experience, their knowledge and their ability," he said.

"A lot of our experience has been missing but it's been good because it's forced us to make sure that we're getting the most out of, and growing and developing the other guys that are coming through."

Joyce, who has started all seven of Bristol's league matches this season, is due to miss the busy December fixture list after going off early in the team's win over South Africa A last week.

"Unfortunately, [it's a] shoulder injury but thankfully I don't think he's going to need surgery, so he could be about six weeks out at this stage," Lam added.