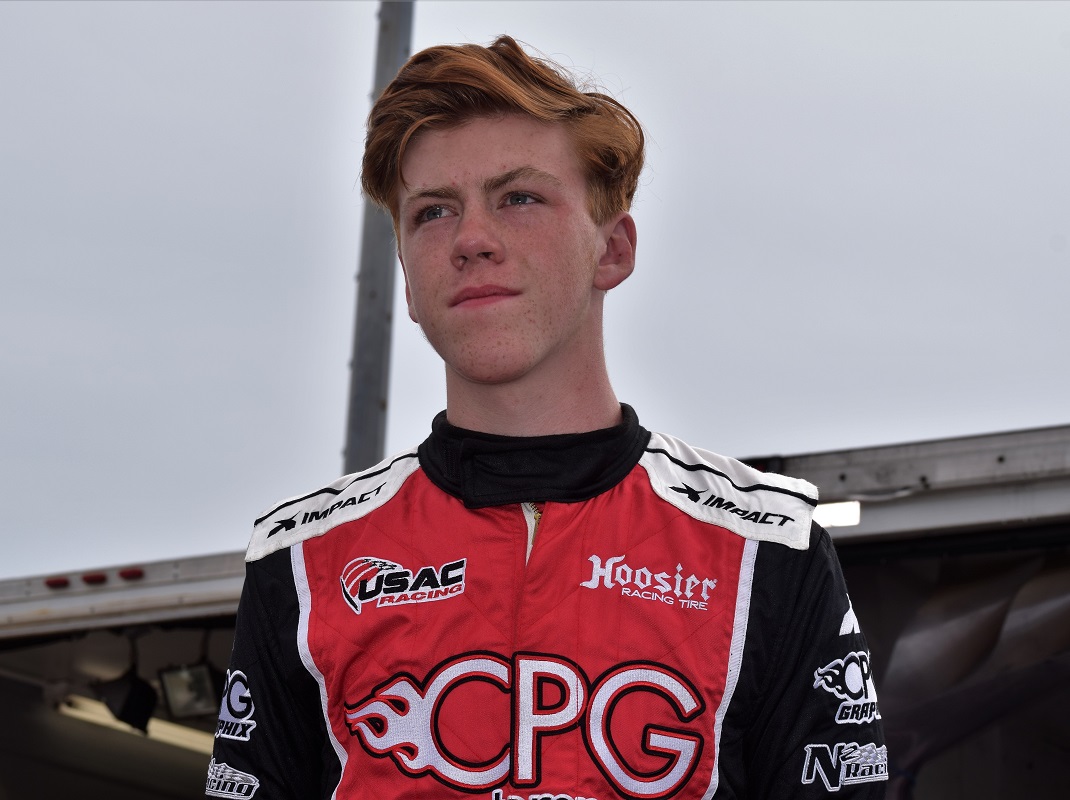 ASBURY, N.J. – There’s not too many teenagers that can say they successfully balance high school, driving race cars and building an up-and-coming graphics business.

Then again, 15-year-old Connor Gross isn’t like most teenagers.

Gross is racing with the USAC Speed2 Eastern Midget Ass’n for the second year in a row, hoping to improve on a challenging rookie season last year that left his seventh in the series standings.

When you combine that with his workload at school and cutting decals and other vinyl for not just his own car, but his competition as well, it makes for an often-hectic and very diverse weekly calendar.

“It’s a lot of fun, though,” Gross told SPEED SPORT. “Bouncing between the shop and home and the race track is something I enjoy. It definitely keeps me busy.”

The Asbury, N.J., young gun spent plenty of time during the offseason becoming much more in tune with his No. 14 Beast Chassis midget, something he called “critical” to his growth as a driver this season after running half the schedule with EMA last year.

“Getting comfortable with the ins and outs of the car, mechanics-wise, has really been the biggest part of the learning curve for me,” said Gross. “My dad and I do all this ourselves, so it’s just been a lot of learning what to do or how a car reacts now, after 10 years of quarter-midget racing.

“Yes, they’re similar in the way that they react, but they do differ slightly.”

Gross opened his Eastern Midget campaign over the weekend at Dillon (S.C.) Motor Speedway, battling the handling on his car all afternoon en route to a seventh-place finish in the 35-lap feature.

“In practice on Saturday morning, we were about to knock down the wall, and we just struggled to get better after that,” explained Gross. “I was talking to everyone and going from pit to pit, trying to get a plan together, and just way over-adjusted for the feature. We went past the center line, where we should have been to get a balanced race car, and got way too loose.

“I was about dirt-tracking it like a dirt midget out there, which is fun in a way, but not what you want.”

Though his season opener didn’t go how he planned it to, Gross is carrying confidence ahead of a busy spring stretch, which will include a visit to Orange County Speedway in Rougemont, N.C., on April 27.

Six months ago, Gross nearly went to victory lane at the three-eighths-mile oval, but was overhauled by three-time series champion Chris Lamb coming to the white flag. This time, he wants redemption.

“Last year, we went to Orange County and led 34 out of the 35 laps. I just couldn’t close it on the last lap,” Gross noted. “That alone gives us a lot of optimism going into our return there next weekend, because it’s probably the track where I feel the most comfortable since I really know what I need to be fast there.

“We want a little revenge; that’s really the one so far that I feel like got away from me, for sure.”

When you compare Gross’ single-car, family-owned operation to the multi-car N2 Racing and Radical Race Gears stables in the series pit area, the difference is slightly staggering at first glance.

However, Gross said he wouldn’t have it any other way, especially on a night when things go right.

“It really is gratifying for us, as a family, when we can have a night like we did last year at Orange County,” said Gross. “If you look at Neal and Nolan Allison, or Butch (Lamb, series owner) and the Radical (Race Gear) crew, they’ve all got multiple cars … compared to just me and my dad.

“It’s a lot to handle as a one-car team at times, but it’s cool to see what we can do when we get it right.”

Away from the race track, Gross’ business – CPG Graphix – is making strides and has kept him working steadily, even when he hasn’t been turning wrenches on his race car or hitting the books.

“It’s been fun to handle all of that while still working in the shop and making sure I do everything I have to do to have my own car competitive,” Gross explained. “I did up Levi Riffle’s car, which he’ll be racing next time out, and have done some smaller stuff for a few other guys as well.

“It’s a small sense of pride, for sure,” he added. “It’s cool to see the CPG Graphix logo on some of the other cars besides just my own.”

As far as his on-track goals, Gross isn’t points-counting for now. That may come later in the year, if he can put himself in contention in the season standings.

“I don’t want to sound cocky, but I really do believe we can get a victory – if not more than one – after how close we were to breaking through last year,” Gross said. “Top threes are what I’m aiming for from here on out, and with those types of finishes, the points will hopefully take care of themselves.

“We know we’re capable of getting the job done; now we just have to go out and seal the deal.”

More in this category: « East Carolina Backs Weatherman & Ware At Bristol USAC Sprints Set To Try It Again At Lawrenceburg »
back to top