USAC Sprints Set To Try It Again At Lawrenceburg 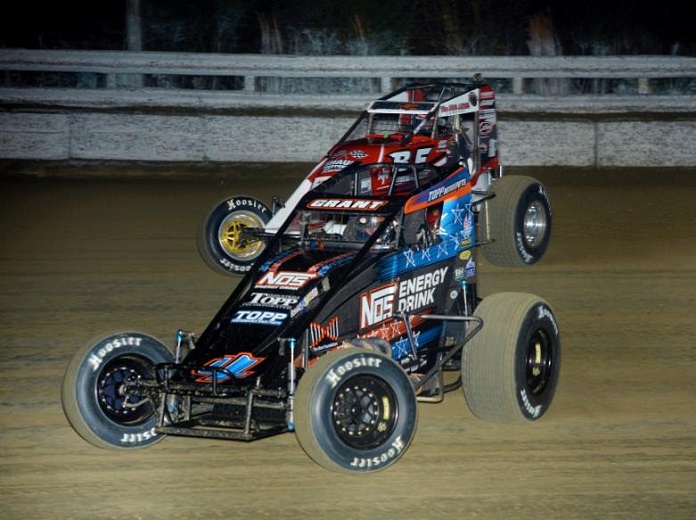 LAWRENCEBURG, Ind. – Springtime at Lawrenceburg Speedway has been an annual tradition for the AMSOIL USAC National Sprint Car Series over the years.

This Saturday marks the second attempt to accomplish that tradition, after Mother Nature’s interruption of racing a few weeks back at the three-eighths-mile, high-banked dirt oval.

Eighteen such events have been held at Lawrenceburg since 1984, and four expected entrants for Saturday’s upcoming race have enjoyed an early-season USAC Sprint Car win in recent times at the track.

On the most recent of those occasions, USAC Sprint Car and Silver Crown titlist Windom raced to victory. the Canton, Ill. driver captured this year’s season opener in Ocala, Fla.

Windom holds down sixth in the standings in his first campaign for Goacher Racing, who finished second during a USAC Sprint stop at Lawrenceburg in 1992 with Dave Darland.

No driver has tasted victory at Lawrenceburg in USAC Sprint Car competition more often than Darland has. His seven victories, of which the most recent was in the spring of 2016, are most among all drivers.

Perhaps even more impressive is that the 1999 series champion has accomplished those seven victories with six different teams. He has a chance to tack on another this weekend.

Like Windom, Grant has won this season and is also a spring Lawrenceburg winner to boot. The Ione, Calif., native won in Ocala back in February and is fourth in the standings following three finishes inside the top-six during the first four events of the season.

Not only did Grant’s first career USAC win come at Lawrenceburg, he also was victorious in the most recent visit by the series last fall, in addition to his April 2014 win.

Following last Friday’s Bloomington round, Thomas took over the series point lead, and is now up by three markers over C.J. Leary coming into this weekend.

Thomas is certainly knocking on the door for his first victory of the season you could say, but this door is seemingly almost off the hinges, with three runner-up finishes in his first four outings this season.

Thomas is the only driver to have placed in the top-five in each of those four starts, and the Cullman, Ala., driver owns three total wins at Lawrenceburg.

Robert Ballou will arrive at this Saturday’s race as the most recent winner at Lawrenceburg. The Rocklin, Calif. native was in winning form last Saturday at Lawrenceburg, leading 15 laps, including the last 14, to capture the 25-lap unsanctioned main event.

Brady Bacon is fresh off his first USAC National Sprint Car Series win of the year, last Friday at Bloomington. He’s returned in the Dynamics Inc. colors for 2019, for whom he won at Lawrenceburg in 2015.

The Broken Arrow, Okla. driver was the hard charger in the unsanctioned season opener at Lawrenceburg two weeks ago, advancing from 17th to fourth by race’s end.

C.J. Leary is a past track champion at Lawrenceburg and that experience showed with a USAC victory during the 2017 season. The Greenfield, Ind., driver dropped back to second in the standings following last weekend’s affair at Bloomington, where he established a new one-lap track record earlier in the evening.

Leary’s new foray in the Reinbold/Underwood Motorsports car for 2019 has already netted a victory, which came in the Winter Dirt Games X finale at Ocala back in February.

Reigning series champion Tyler Courtney is beginning to heat up, with finishes of third, third and fourth in his last three races.

The Indianapolis wheelman has been in victory lane at Lawrenceburg with USAC recently, dominating all 30 laps of last year’s Indiana Sprint Week stop.

Similar to Grant, Chase Stockon and Josh Hodges have a fondness for Lawrenceburg, as that is where each driver captured his first career USAC National Sprint Car feature victory.

Stockon wired the field, leading all 30 laps, to win in the fall of 2012. Meanwhile, Hodges took the lead just past the halfway mark to score his first, and to date, only career USAC win.

He did so in track-record fashion that night as well, ripping around the joint in seven minutes, 21.09 seconds, a 30-lap record which still stands today.

More in this category: « East Carolina Backs Weatherman & Ware At Bristol Eslick Back With American Flat Track In Texas »
back to top