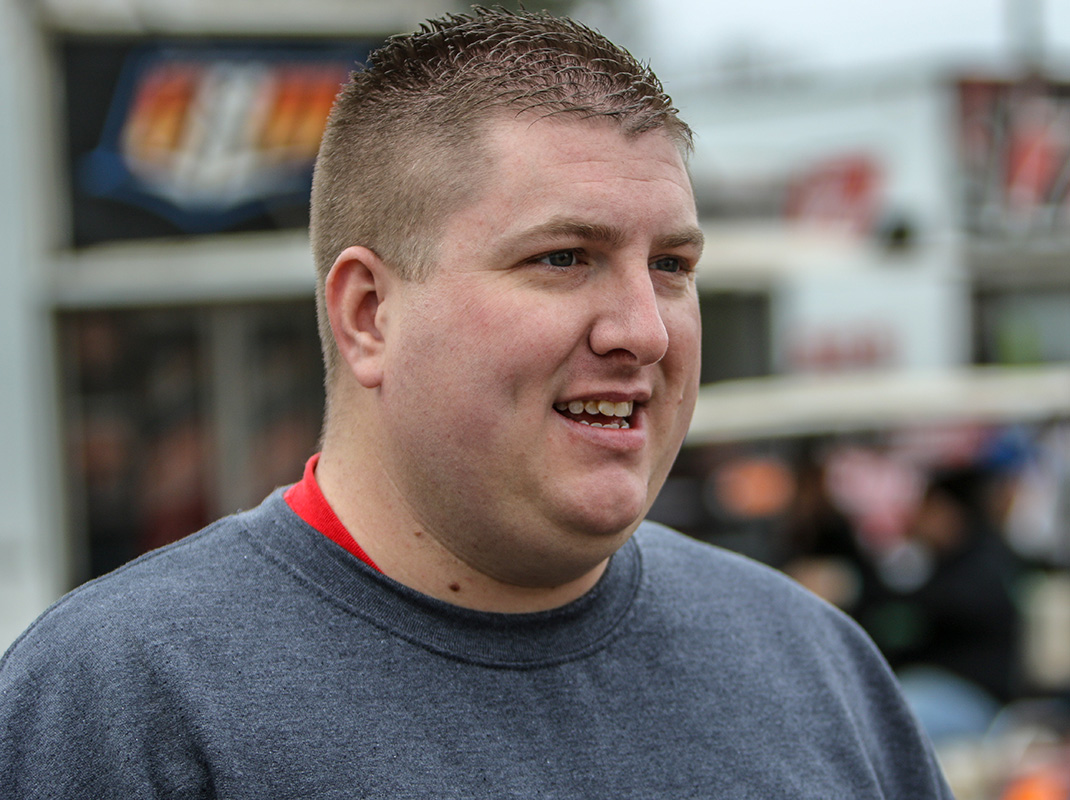 Chris Tilley is one of the hardest working men in motorsports.

No, he’s not a race car driver. He’s not a car owner or crew member. The 33-year-old Tilley is a promoter, announcer and public relations man; and those roles keep him incredibly busy.

“I think last year with other things that I had going on, I spent four Saturday nights at home. Two of them were due to rain,” Tilley admitted.

It is understandable if you’ve never heard of Tilley. Though if you’ve been to a dirt-track race in the Southeast or Midwest in the last few years, you’ve probably heard his booming voice. The kind-hearted native of Somerset, Ky., tends to fly under the radar when he’s walking the pits at a race track, though his voice is recognizable during the many events where he serves as announcer.

So how did Tilley make his way into the racing business? Like many before him, it’s because he went to the race track with his dad as a kid.

This content is accessible to subscribers only. To read the rest of this article, please login, or if you are not a subscriber, signup here and explore our subscription options starting at just $19.95 per year. Subscribers have access to all premium content including SPEED SPORT Magazine features and editorial and exclusive programs and features on SPEEDSPORT.tv. Don't miss out on this tremendous value!
“My dad took me as a youngster to a lot of the local area race tracks. We had three or four in our local area and I got started by going to Eldora for the World 100 with him,” Tilley recalled. “My uncle bought Lake Cumberland Speedway in the mid-’90s. That’s how I got started, working for him at Lake Cumberland Speedway in Burnside, Ky.”

During his time at Lake Cumberland Speedway, Tilley got the chance to do a little bit of everything. From selling tickets to parking cars or working in the concession stand, Tilley didn’t mind getting dirty while he took a hands-on approach to learning.

“I started parking cars, working in concessions, taking tickets. I moved up to the tower and got to score. That was something I was pretty good at, scoring the race cars,” Tilley said. “Then I got the opportunity to announce one night. I think that’s the same story everybody uses, it seems like we all fall into luck sometimes as an announcer. Somebody doesn’t show up one night and you get to fill in and you get started that way.

“I announced for him and got to do some race directing. I had to do every job at that race track and I learned how to do every job. Not to say that I was any good at one particular job, I just did it all.”

Over time Tilley’s voice became recognizable in the motorsports world, so much so that veteran dirt late model racer turned promoter Ray Cook tracked Tilley down and offered him the opportunity work as announcer and PR man for his Schaeffer’s Oil Southern Nationals Series.

“After the 2007 racing season, he was needing an announcer,” Tilley recalled. “We met in Wartburg, Tenn., and talked about it at a race that they were doing and it all kind of worked together from there.”

What originally started as a deal to announce at 10 races has since grown exponentially. Cook now promotes three different series — the Southern Nationals, Spring Nationals and Fall Nationals — and Tilley is the announcer and PR man for all three.

This year, Cook’s three series account for 32 race days for Tilley and that’s just the proverbial tip of the iceberg. In addition to working for Cook, Tilley keeps busy by promoting three touring series of his own.

Tilley owns the Schaeffer’s Oil Iron-Man Late Model Series, the Brucebilt Performance Iron-Man Open Wheel Modified Series and the Schaeffer’s Oil MARS Racing Series. He started in the promotional game by organizing an annual event in Eastern Kentucky and it took off from there.

“I started a race that I did … one race a year, an event in Eastern Kentucky called the Iron-Man Classic,” Tilley explained. “I started in 2004 and I ran one race annually. It was a race I put in Eastern Kentucky to give those guys a chance to run for extra start money and some bonuses. I went out and got sponsors for the racers and it has become an annual event. That is kind of the brainchild and how the Iron-Man Series came about.”

More in this category: « East Carolina Backs Weatherman & Ware At Bristol Gateway Motorsports Park Getting A New Name »
back to top