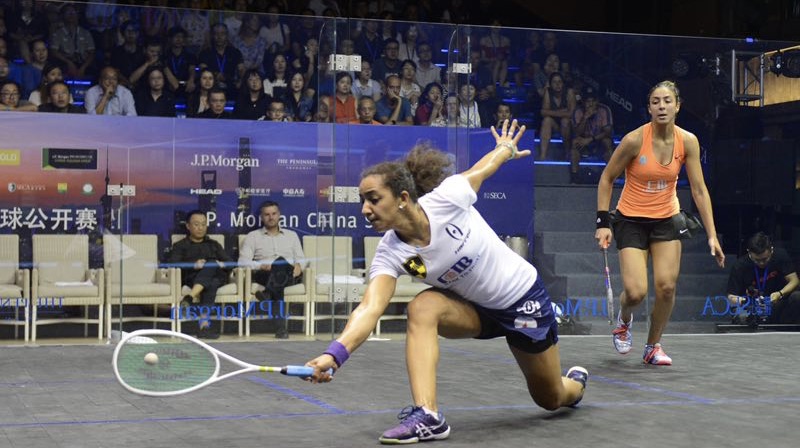 Husband and wife bring new season to life, but mighty Mo wants that No.1 ranking back
By ELLIE MAWSON in Shanghai

The 26-year-old Egyptian has been in formidable form this week, despatching both former World No.1 Rachael Grinham and compatriot Nadine Shahin in less than 20 minutes in her previous rounds, and today proved no different as she started brightly against Gohar.

“Today was one of my best performances,” said 26-year-old El Tayeb afterwards. “I’ve been very focused during the off season and this match just proves that I am on the right track and that I’m playing well.

“I’m very excited to be in the final of my first tournament. It gives me a lot of confidence and obviously it doesn’t get any better than playing the World No.1, defending champion and the best player of the last 12 months. I’m very excited for it.”

El Tayeb will take on World No.1 Raneem El Welily for the trophy tomorrow after she overcame World Junior champion Hania El Hammamy in straight games.

Nour El Tayeb has been in phenomenal form all week

El Welily, who won the China Squash Open title last year, will be eyeing a repeat performance as she looks to pick up the first honour of the new PSA World Tour season.

“I’m very pleased to be through to the final here in China,” said 30-year-old El Welily. “It’s such a special place for me now, I’ve had good results almost every time here now, so I’m really pleased.

“My squash has been a bit up and down mentally and playing in patches throughout the entire week. I’d like to see myself more consistent and more solid.”

Meanwhile, El Tayeb’s husband and World No.1 Ali Farag will contest the men’s final against World No.2 and close rival Mohamed ElShorbagy after they defeated India’s Saurav Ghosal and Marwan ElShorbagy, respectively.

Farag took out Ghosal – the only non-Egyptian left in the tournament – by an 11-4, 11-9, 11-4 margin as he and wife, El Tayeb, look to repeat their 2017 U.S. Open performance, when they made history by becoming the first sporting couple to lift the same major title on the same day.

“It was a good performance and I’m very happy,” said 27-year-old Farag. “It is the best I have played all week. I couldn’t afford to let Saurav get in front of me and I think I did that very well today.

“We haven’t done it ever since [repeat the U.S. Open victory with wife Nour El Tayeb], even though it’s not a Platinum event, it is still quite a prestigious one and I would love for the two of us to grab the first titles of the season. We know the challenge that lies ahead of us though in Raneem El Welily and Mohamed ElShorbagy, so we will have to be at our very best.”

Farag will face familiar rival in Mohamed ElShorbagy in the final, after the 28-year-old defeated his younger brother, Marwan, in the earlier semi-final.

Mohamed ElShorbagy triumphed in a fierce battle with brother Marwan

The siblings played out a brutal match with both players pushing each other to their limits on the humid court as Mohamed overturned a one-game deficit to win 8-11, 11-5, 11-8, 11-9 in 64 minutes.

“It’s very tough, physically and emotionally, to play against my brother,” said 28-year-old Mohamed afterwards. “We know each other very well. Mentally, it’s so hard when you know each other.

“To play the first tournament of the season and to win it would be a huge confidence boost and send a message to the rest of my opponents. I’m here to get back to World No.1, I’m not here to do the same results I did last season because it wasn’t good enough and I fell to No.2.

“I’m back and want to be playing in finals and winning tournaments and tomorrow is another step towards doing that.”

Action from the finals of the J.P. Morgan China Squash Open takes place at 19:00 local time (GMT+8) tomorrow (Sunday September 8) on the glass court in the evening at the Peninsula Shanghai.