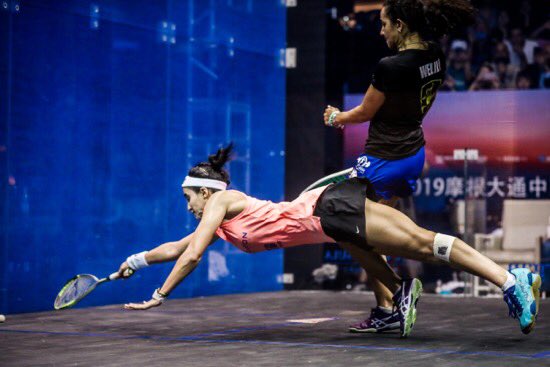 El Tayeb stunned defending champion El Welily in a thrilling five-game battle to take the first silverware of the new PSA World Tour season as she displayed a formidable performance on the glass court atop the Peninsula Shanghai.

The last time El Tayeb got the better of El Welily was at the 2018-19 PSA World Championships in Chicago, when she claimed a shock victory over the then-reigning World Champion.

And El Tayeb once again showed that she has what it takes to challenge for the major titles this season as she held off a resilient El Welily to be crowned the women’s China Open champion for the first time in her career.

“It didn’t seem like it was ending, I can’t believe I’m the winner,’ said El Tayeb afterwards. “Throughout the whole match I was reminding myself that it’s good to be in the final, even though in the fourth game I was leading and I started to see the finish line a bit. I had to remind myself that I was playing Raneem and that the finish line might not happen.

“When she won the fourth I was a bit defeated and then she started the fifth very well but Ali [Farag] told me to just dig in. Last match I played last season was against her and I saw where my level was, and I wanted this match to be another indicator of where my level was.

“I can’t believe I won, it feels a bit like a dream because throughout the match, I was tired and I had to keep reminding myself of one more rally at a time. It’s a dream start to the season and hopefully I can keep going.”

Meanwhile, ElShorbagy moved a step closer to claiming his World No.1 spot back after defeating current incumbent Ali Farag to win the men’s China Open title.

ElShorbagy, the 2016 champion, started on fire as he raced into a 7-0 lead, before comfortably putting himself in the driving seat of the match with an 11-3 win in the first. He kept up the relentless pressure to double his lead, despite a much improved performance from Farag in the second.

Farag refused to go down without a fight, however, as he fought back in the third. But it was not enough to disrupt ElShorbagy’s game plan as he took the fourth to win his second China Open title.

“This season I’m going to get back at him, every session in the summer break I was thinking about how I could beat him and get the No.1 back. What he did last season was unbelievable, he lost only in the quarters last year, I’ve never faced a guy as consistent as him and he is so tough to play.

“I’m up for the challenge and I look forward to playing against him more and I’m sure he will come back strong next time.”