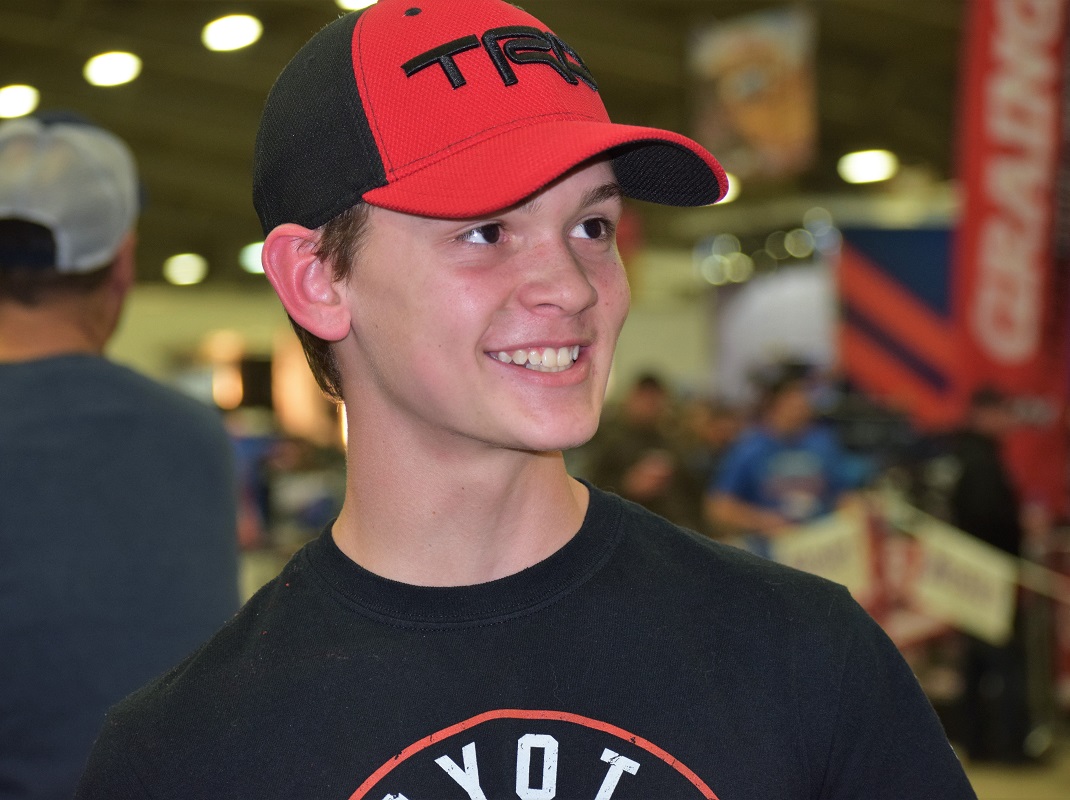 JACKSONVILLE, Ill. – Toyota Racing Development driver Jesse Love will take the biggest step in his young career to-date on Friday night when he straps into a Keith Kunz/Curb-Agajanian Motorsports midget for the first time.

The 14-year-old native of Menlo Park, Calif., will jump behind the wheel for the flagship Toyota midget team during Barney’s Pub Midgets and More Night at the quarter-mile bullring, the opening race for the Jacksonville Summer Midget Series.

Track manager Ken Dobson devised the 10-race series – open to drivers with less than two national midget victories in either POWRi or USAC competition over the past year – as a way for some of the division’s rising stars to go toe-to-toe against the stout local competition the track has to offer.

Not only does Love fit the “rising star” moniker, he’s hoping that Friday night is just the beginning.

The Easter weekend program is Love’s first of roughly 25 races with KKM this season, a package put together as part of the Toyota Racing Development pipeline that the teenager hopes will allow him to travel the same path up the racing ladder as now-NASCAR stars Kyle Larson and Christopher Bell did.

That path has to start somewhere, however, and Love recognizes that Friday is his maiden voyage.

It’s a voyage he’s been eager to get started on ever since working with the team for a week during the Lucas Oil Chili Bowl Nationals in Tulsa, Okla., back in January.

“It has been a long wait,” Love told SPEED SPORT. “I’ve been ready for this for three months, and it’s been so hard to be patient knowing that this has been on the horizon for me. These last few days, I’ve basically been focused on how to get (to Jacksonville) as quick as I can and how to make the time pass as fast as possible. There really aren’t words to tell everyone how ready I am for this opportunity.

“I’m really looking forward to the whole first experience and I know it’s going to be a fun race,” Love continued. “I feel ready – mentally, physically and emotionally – and I know this team has what it takes to come out and be successful right out of the box. I’m so thankful to Toyota Racing for believing in me.”

For Love, who has spent time in pavement and dirt midgets, Legend cars, winged sprint cars and late models already this season, his preparation process has had no lack of seat time.

But for his debut in a Kunz car, the young gun has added to his off-track learning curve as much as possible, including plenty of film studies and time in the gym.

“I’ve been doing a lot of physical and mental training, as well as watching every video of midget action at Jacksonville on Loudpedal and YouTube that I can find,” Love noted. “I’ve seen as many laps of racing there over the last four or five years as I feel like I can, just trying to learn and figure out as much as possible before I actually get out on the track. The simulator has helped as well, for sure.

“It’s a lot of little pieces going together to make sure I’m as ready as I can possibly be.”

Love already has confidence coming into the event, thanks to its unique style of competition and the rough-and-tumble action he’s grown to love over his career.

“Jacksonville is definitely a track that I can already see myself loving, because it’s similar to some of the micro tracks in California that I’ve experienced in the past,” explained Love. “I believe we’ll be fast there and I could even see us being able to win there, as long as I can find the feel that I need to have for speed.

“It’s elbows up racing and keeping the car pinned where you need it to be; that’s short-track racing and the style of racing I grew up with,” he added. “I’m looking forward to the challenge.”

Making Friday night’s event even more special for Love will be his car number – No. 97k – for the event.

That number is the same one that Larson, Bell, Rico Abreu and Spencer Bayston all campaigned during their earliest days with Kunz’s operation.

All four drivers went on to win multiple races with KKM, while three of the four – Bell, Abreu and Bayston – earned USAC national midget championships as part of the organization.

Love is hoping to join that select fraternity and do the historic number proud in his debut start.

“When I found out that was going to be my number, I was ecstatic,” Love smiled. “I haven’t even seen the car yet; I know it’s going to have a JBL wrap on it, but my emotions won’t be complete until I get to lay eyes on it for the first time before Friday’s race.

“I have a really good feeling going in, and to be able to run the same number that those guys did … it’s a real honor and I’m probably going to be a little teary-eyed before we get down to business.”