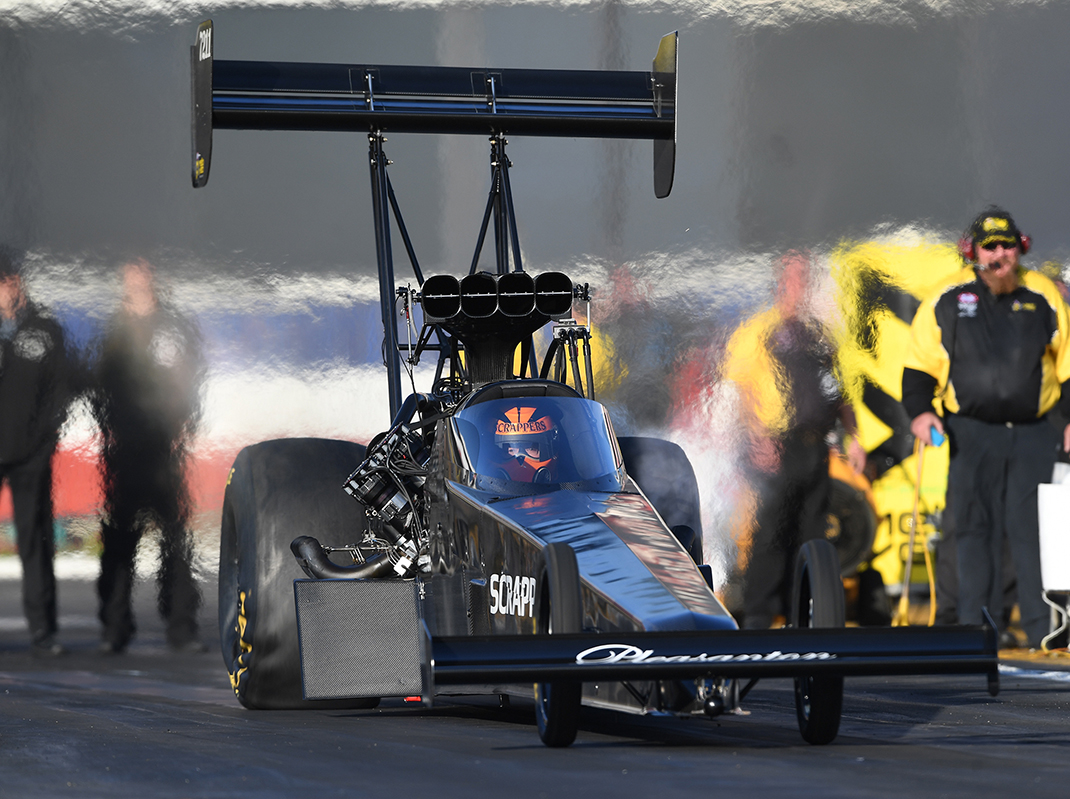 CONCORD, N.C. – When Mike Salinas started competing in the NHRA Mello Yello Drag Racing Series, he did it with the intent of being successful right off the bat.

With a final round in his 25th career race and his first career Top Fuel win in his 42nd race, Salinas accomplished that, but it has only motivated his Scrappers Racing team even more.

Salinas grabbed his first NHRA win at the four-wide event in Las Vegas earlier this month, which means he will have a chance to sweep the biggest spectacle in drag racing when he competes at zMAX Dragway for the upcoming 10th annual NGK Spark Plugs NHRA Four-Wide Nationals, April 26-28. For Salinas, it’s another opportunity to grab a victory in his 10,000-horsepower dragster, which is more than enough to keep him competing at a high level.

“We were pretty motivated as it was, the difference is all the guys on the team,” Salinas said. “All the guys, they knew (a win) was possible. I didn’t because it had never happened before. The car was super smooth, everything was smooth and it was good (in Vegas). We were able to soak it in and enjoy the victory, and we want to go try to do the same thing. We go into every race taking it one round at a time. So, let’s go there, qualify and see how we do, one round at a time.”

Steve Torrence (Top Fuel), Cruz Pedregon (Funny Car), and Jerry Savoie (Pro Stock Motorcycle) were last year’s winners. It is the sixth of 24 events during the NHRA season and marks a special race, as one of the most unique experiences in motorsports turns 10 years old. As Salinas proved in Las Vegas, the four-wide racing set-up is just fine with him.

There, he was the No. 1 qualifier and rolled to the victory. He suffered a tough first-round loss last weekend in Houston, but Salinas remains fourth in points, just 47 points behind leader Doug Kalitta. Others to watch in Charlotte including defending event winner and world champion Torrence, Houston winner and 2017 champ Brittany Force, three-time champ Antron Brown and Clay Millican, but Salinas has turned into a championship contender after teaming up with the likes of legendary tuner Alan Johnson, who is Salinas’ tuning advisor, and crew chief Brian Husen.

“I expected to win Pomona,” Salinas said. “I have a different mindset. Everything I do is in a strategic way. I’m a goal-achiever and I’ve got this gorilla off my back, and now we can go have fun and win more races. (Alan) is amazingly good, so I’m pretty lucky to be part of it. It’s been a good journey. This car is prepared right and it’s amazing to watch this team work.”

It’s motivated Salinas, who hopes his success and drive has sparked two of his daughters, Jianna and Jasmine, who both started their racing careers this year in Pro Stock Motorcycle and Top Alcohol Dragster, respectively. Both continue to make solid strides early in their career in 2019, while Mike Salinas is simply thrilled to have this success together as a family.

“We’ve built something,” Salinas said. “The important thing for me is I’ve got four daughters in or coming into the sport. Now we have a good bar for them to reach and meet. It’s going to be a great thing. It encourages every one of them. If you put in the work you’re going to do well and they put in the work. The girls are going to be great. NHRA has been amazing with us and it’s pretty awesome. It’s pretty surreal to be honest with you.”