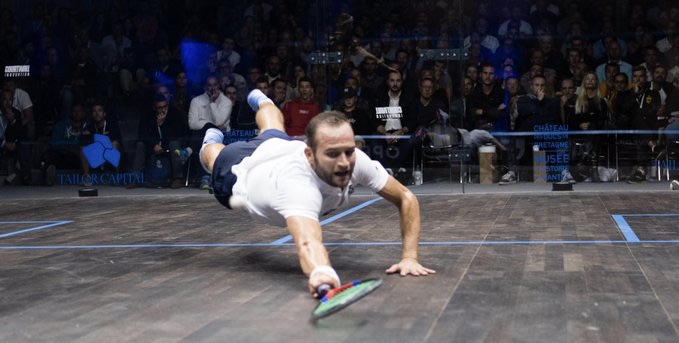 Off to Oakham station for the train ride to Stansted Airport I go, not yet realising just how heavy this will prove to be.

Once relieved of this heavy weight on my shoulders, I sail through Stansted security but have to put a bit of a rush on to get to the gate to board. Funny how it is gate 44 for Nantes – anyone who knows this area will realise the significance of that number.

The flight is uneventful and I am rewarded with extra legroom seats for free – on a Ryanair flight too! This is only because the two seats next to me are vacant. A welcome bonus for someone 1m 90cm (6ft 2in) tall.

Baggage retrieval is quick and easy and I am reunited with the ton weight of a racket bag. It is then a quick bus and tram ride into the city centre, followed by a 700m walk to the Chateau, which felt like seven miles with that racket bag!

I catch a first glimpse of the Chateau des Ducs de Bretagne, which looked stunning with a lovely blue sky backdrop. I am greeted there by Matt Coles, the main PSA guy for this tournament. I am there to deliver a few World Squash Day shirts that will be used to help promote the event.

We are then let into the specially constructed arena in the courtyard, which is rather warm from the heat of the day. Once again, the Nantes team have done a fantastic job, with the court end made clear so you can see the backdrop of the chateau.

I am greeted there by Romain Suire, a key member of the organising team and of course the tournament MC. It is great to finally meet him at last, having hooked up on Facebook and exchanged numerous messages.

On the all- court, two of the main pretenders to the French Open Crown are undertaking a drop drive practice session – The Marksman, James Willstop and Superman, Paul Coll, so I stop briefly to admire and take a few photos.

After taking a few external shots of the venue, I am picked up outside the Chateau by Gilles, one of my French friends who I have not seen in 32 years since we were at Angers University together during my year out in France. A rather scenic drive along the banks of the River Loire ensues to La Varenne, where Gilles lives.

It is an all too short catch-up but after a few beers and a nice omelette made from the vegetables Gilles grows in his garden, I then catch the last train from nearby Ancenis to the lovely city of Angers, where my other friends live. I have to say, French trains make me realise how poor our rail system in the UK truly is.

They have constructed a rather nice log cabin in their garden since my last visit, just for visitors, so I now have this to myself for the next two nights. My head hits the pillow and I am out light a light.

I woke to the news that “Gregoire Marches on” (I bet that headline has never been used before!) at the expense of top seed Simon Rösner. I have no doubt that the amazing crowd at Nantes had something to do with that victory. Can the French Warrior feed off the crowd in the same way in his quarter-final clash today with Superman I wonder?

Today, I am returning once again to Squash du Lac de Maine (pictured), where I played squash during my year out in the mid-80s and am looking forward to meeting Florian and Philippe Pouffer again, the father and son management team.

Tomorrow it will be back to Nantes to first take in some of the action at the inaugural French Amateur Open at La Maison du Squash, before hooking up with the crew from Lings Squash Club who will have arrived by then. We are having a hit at D’Sport and Co in Nantes, before then heading to the Chateau for the French Open Semi-finals.