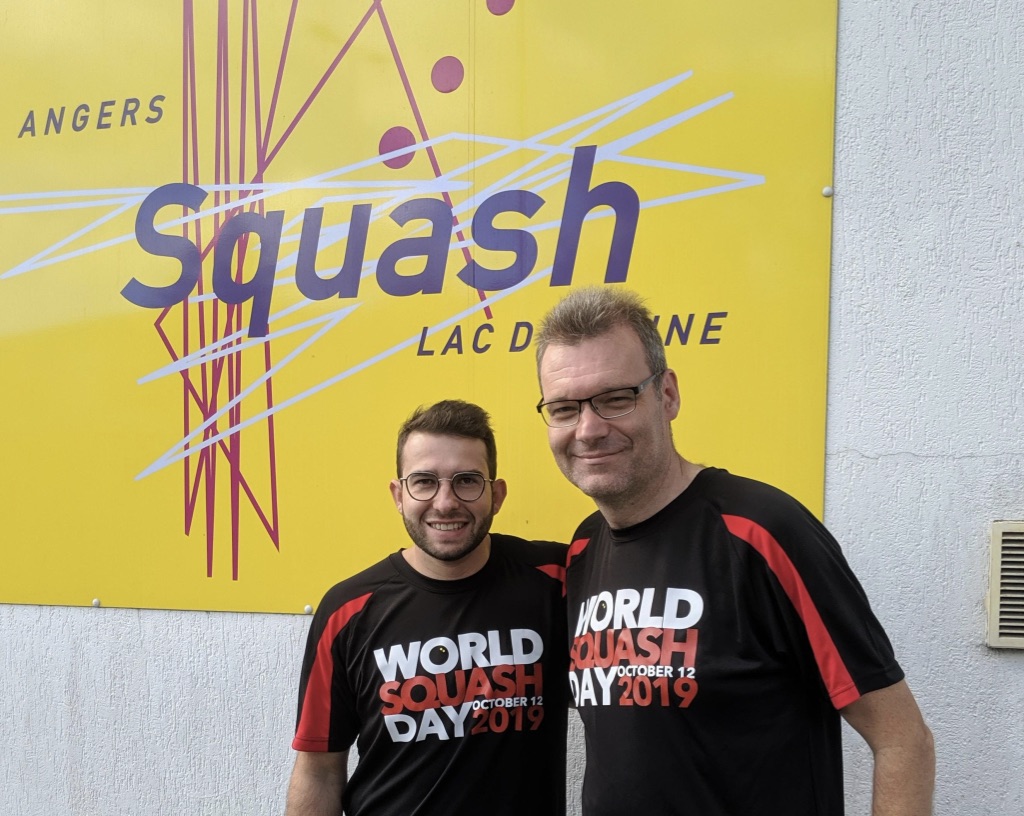 After a great night’s sleep, my friend Etienne takes me by car to revisit the club where I played as an exchange student at the Faculte de Lettres at Angers University, Squash du Lac de Maine. This club, situated reasonably close to the campus where I was based, had not long opened its doors back in 1985-86 when I was there, but these days is a thriving hub of squash activity.

I am greeted by the owner, Philippe Pouffer, who admitted that he was probably coaching squash at the club back when I was first there. We will be joined later by his son Florian, who has recently entered the family business as co-owner.

As I know my way around the club, I have a quick scout about and am once again in awe of the first feature of this club that I have always admired – the amount of natural light that comes into the building. In fact, Philippe proudly boasts that one of the five courts is the only one in France that does not require any artificial lighting, during daylight hours at least.

We chat about the business model and general philosophy behind the running of this successful club, which boasts over 750 individual players that come through its doors. These are mostly casual leisure players, but at least 100 of them have also taken out full memberships.

Philippe is a true believer in catering for the leisure player through arranging fun internal competitions, social events and doing the maximum to encourage people to play different opponents. Every Friday, there is a team match, with a more serious individual competition every month. These are always followed by a social gathering in the bar, or a trip into town for a meal at the club’s partner restaurant. There is also a club ranking system, with challenge matches being used to change positions.

In addition, Philippe takes the stress out of arranging matches by matching opponents. All a player has to do is put their name down for a court and Philippe will find an opponent for them to play. This is by far the most common method by which matches are arranged at the club. This is also a good way of players getting to know each other, of playing opponents at different levels and most importantly of allowing players’ games to develop and strengthen.

Once we are joined by Florian, we move on to discuss World Squash Day, which both father and son admit to not having been aware of up until now. I encourage them to consider staging an event on Saturday 12th October.

Finally, we agree to consider an exchange event for next year, with me bringing a team of English players over and Philippe and Florian then matching us with a Lac de Maine team. Perhaps we could organise this during the 2020 French Open, so we could combine it with a visit to Nantes to watch the action?

Etienne and I then nip back over to Les Ponts-de-Cé to the south of the city where he lives, to collect his son Romain. After a good lunch, we head into Angers city centre to revisit some of the main sights. If you have not been, it really is worth a visit.

Like Nantes, there is a fine Chateau, which is a bit older than the one at Nantes, although it was expanded to its current size around the same period that the Nantes Chateau was built. It is certainly bigger than the one in Nantes, but I will let you be the judge of whether bigger is better …

Tomorrow (now today, Friday), I return to Nantes, firstly to watch the inaugural Amateur French Open at La Maison du Squash, before finally linking up with the Lings crew for a much-needed hit at D’Sport and Co. I then will meet up with the Squash Travel Tour group at the Chateau to watch the semi-finals.