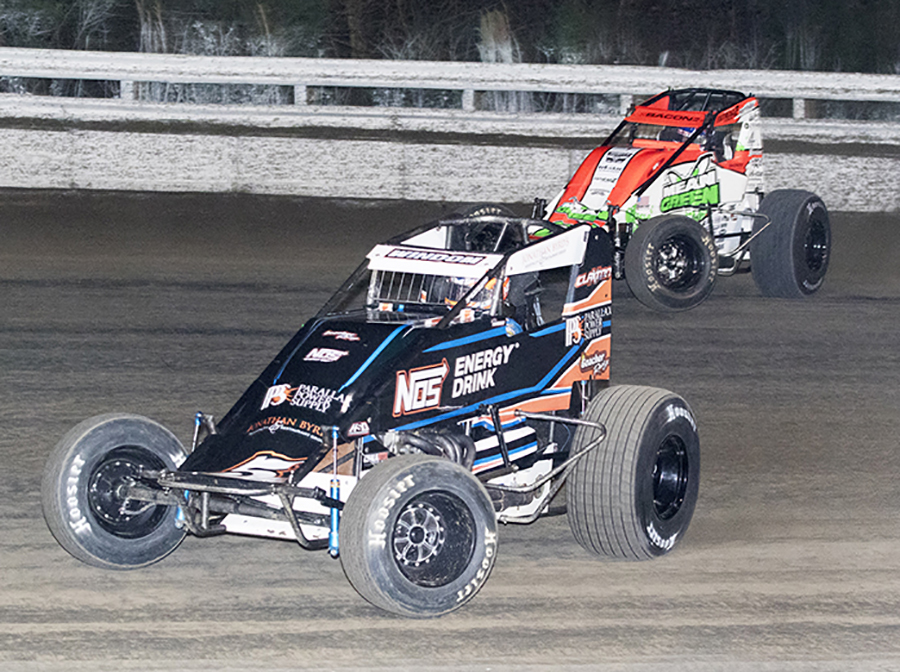 Kevin Thomas (no relation to Kevin Thomas Jr.) won the first of his seven career USAC National Sprint Car features that night aboard Hazen’s No. 57.  The driver and team who finished second that night both remain not only active, but thriving and primed for victory in the series’ return to Lawrenceburg this Saturday.

Darland reached victory lane for the first time with USAC nine months later and went on to become the winningest driver in the history of the USAC National Sprint Car division with 62 triumphs and counting.

A month following the Lawrenceburg race, Goacher Racing earned its first USAC victory with Danny Smith driving the No. 5G to the win in the 4-Crown Nationals at Eldora Speedway. Over the years, the Goacher team has made sporadic appearances with USAC, most notably capturing the Little 500 sprint car race in 2015 with Windom.

In 2018, the team returned to the USAC scene, making eight appearances with Shane Cottle as the driver with a top result of sixth at the Terre Haute (Ind.) Action Track last Fall.

Right out of the box, Windom and Goacher posted a victory, winning the season opener in Ocala, Fla., continuing his run of success behind the wheel and providing Goacher Racing with its second USAC win, 27 years after its first.

Goacher’s Lawrenceburg success came on the former quarter-mile track at Lawrenceburg, while the bulk of Windom’s shining moments there have come on the current three-eighths-mile layout. Windom did score a fourth-place finish during his rookie season of 2007 on the former track.

Coming into the most recent Springtime USAC National Sprint Car race held at Lawrenceburg in April 2017, Windom had some voodoo to battle.  In almost a cruel way, he had finished second on five different occasions during his USAC sprint car career at Lawrenceburg.

At the green on that night, Chad Boespflug initially held the advantage into turn one, but Windom answered with a big run down the banking off turn two to blast around the outside of Boespflug and grab the lead. Once clear, Windom shot away to a full-straightaway lead by the time the caution fell for the slowing car of Carson Short on lap nine.

Just past the halfway point, Windom neared the tail end of the field, weaving his way through the lapped traffic as a trail of sparks began to stream out of his orange No. 5. Windom was working both pedals on entry, and if the brakes went out, they went out, which would seem to make it a bit of a hairy situation for many. Windom was on a rail as he negotiated the lappers, clearing them by the 24th lap.

However, with Cottle coming to a rest backwards on the inside of turn four with five laps remaining, the yellow flag would wave and bunch up the field for one final run to the checkered.

As Windom ventured up to the top of turn one on the lap 26 restart, Boespflug made one last go of it as he tried to slide up in front of Windom between turns one and two. The second, third and fourth verses were the same as the first. Windom never batted an eye as he cruised around the outside of Boespflug to take the advantage for good, distancing himself from Boespflug by 1.3 seconds at race end to shed the label of perennial Lawrenceburg bridesmaid.

The only other time Windom’s won this early in the season, before May, it resulted in a USAC National Sprint Car title for him back in 2017. With a win under already under his belt in his initial full season for the Goachers, if the past is any indicator of what lies ahead, this could become a magical season for this combo.

More in this category: « East Carolina Backs Weatherman & Ware At Bristol South Boston Drivers Looking Forward, Not To The Past »
back to top