South Boston Drivers Looking Forward, Not To The Past 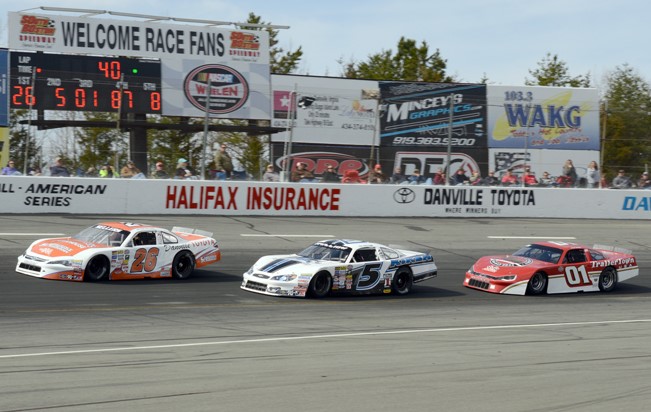 SOUTH BOSTON, Va – Two weeks after the late model stock dust up at South Boston Speedway, it appears to be business as usual for this Saturday night’s NASCAR Easter Bunny Late Model 100.

All drivers involved in the incident – Lee Pulliam and Philip Morris – are expected to be back on track.

“That’s all in the past. I’ve already won a race since then and I’m looking forward to winning a trophy this Saturday,” said Pulliam, four-time NASCAR Whelen All-American National Champion who captured the $30,000 to-win CARS Tour race April 7 at Orange County Speedway.

“I’m just concerned about racing. That’s the way it is for me every week. If you’re a good race-car driver, that’s what you do.”

Pulliam and five-time NASCAR Whelen All-American Series champion Philip Morris were at the heart of an altercation in the second 75-lap late model race at South Boston on March 30 that resulted in fines and suspensions from NASCAR and was the hot racing topic on social media for several days.

The pair were involved in several bumping incidents with Morris the big loser after contact from Pulliam caused him to spin into the turn-three wall, severely damaging his car. During the ensuing red-flag period, Forrest Reynolds, a Morris crew member, tried to crawl into the passenger window of Pulliam’s car and wound up tumbling to the track when Pulliam pulled away.

Morris was fined by NASCAR for his crew member’s involvement, Pulliam was fined and suspended until April 17 by NASCAR, and Reynolds was barred from the infield of any NASCAR track for the remainder of the year. South Boston Speedway has also banned Reynolds from the track in any capacity indefinitely.

Peyton Sellers, the third national champion in the field, went on to win the race. Sellers took advantage of the break in South Boston’s schedule to also win another big Late Model race, the Visit Hampton Grass Roots 200 at Langley Speedway.

“Last year me and Philip had a couple of wrecks on the track that were hard racing … just chalk it up to hard racing. I know if Philip gets under me and makes contact, it’s racing,” said Sellers, the defending Late Model track champion at South Boston. “Philip made contact with Lee a couple of times and then he just got turned. That crossed a whole different respect level. They have to live with that. I’m not saying Philip is going to retaliate or not, but when Lee sees that 01 (Morris) in the mirror, he has to think about it.”

The Late Model Stock division will highlight a fiver-race schedule Saturday night with a 100-lap event. The Limited Sportsman class will stage twin 25-lap races while the Budweiser Pure Stocks have a 30-lap race and  the Budweiser Hornets have a 15-lap race.

Before the racing action kicks off, there will be an Easter egg hunt at 6:30 p.m. for youngsters 12-and-under.