Djokovic & Nadal through, Norrie out in Monte Carlo 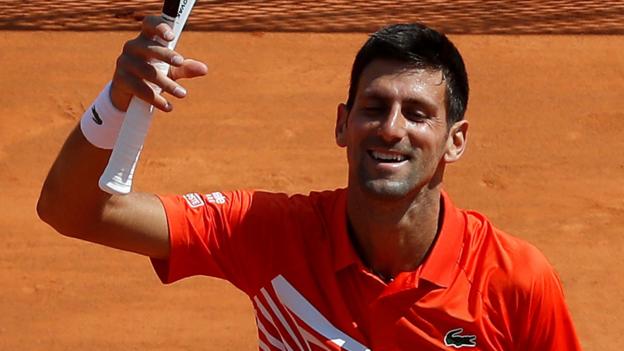 Novak Djokovic and Rafael Nadal breezed into the Monte Carlo Masters quarter-finals, but Britain's Cameron Norrie could not progress from the last 16.

Second seed Nadal eased past Bulgaria's Grigor Dimitrov in a 6-4 6-1 win on the clay - having now won 23 consecutive sets at the Masters 1000 tournament.

Norrie lost 6-2 7-5 to Italian Lorenzo Sonego, ranked 40 places below him.

The British number two, who is set to rise into the top 50 next week, was broken four times and struggled to test Sonego's serve.

Norrie, 23, did break back when Sonego served for the match at 5-4, only to lose his serve in the next game as the Italian went on to seal victory with a hold to love.

Nadal, 32, encountered few problems against Dimitrov, who he has now beaten in 12 of their 13 meetings, as he continued to look dominant on his favoured surface.

Bidding for an unprecedented 12th title in the principality, the French Open champion outclassed the former world number four and won eight of the last nine games.

The reigning Wimbledon, US Open and Australian Open champion will face a last-eight meeting with Russian 10th seed Daniil Medvedev - who he beat on his way to victory in Melbourne in January and has not lost against in three meetings.

Medvedev, 23, continued his good form against Greece's Stefanos Tsitsipas, winning 6-2 1-6 6-4 to extend to four victories his 100% record over the ATP Next Gen champion - who doubled faulted on match point.

Italian 11th seed Marco Cecchinato was also knocked out after a 6-4 4-6 6-4 defeat by Argentina's Guido Pella, who goes on to meet Nadal.