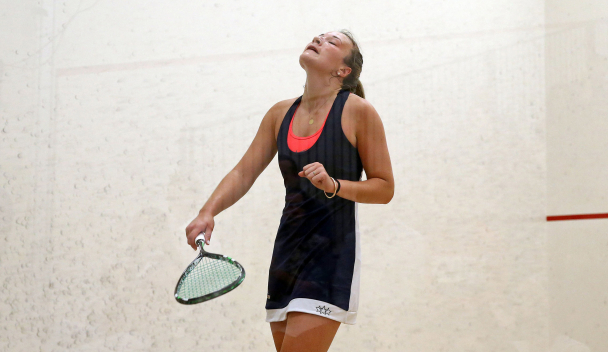 The American duo of Olivia Fiechter and Olivia Blatchford Clyne are through to the second round of the Oracle NetSuite Open after victories in San Francisco.

World No.39 Fiechter saw off Belgium’s Tinne Gilis in the first round, overcoming her higher-ranked opponent in straight games on the traditional court at the Bay Club.

The American had full control of the game, despite the Belgian being ranked 12 places higher. Fiechter took the first 11-6, before then winning the match after the second, sending the crowd into a frenzy.

In the second round she will face the tournament’s No.4 seed, New Zealand’s Joelle King, on Thursday afternoon.

“I just came out of university and I love the idea of playing for a team. Having people out here that I know and love and being able to pull out a win for them makes it all the more special,” Fiechter said.

“I suffered a partial tear in my left quad but obviously it could not have come at a better time. The beginning of my summer was just recovery and giving it time to heal. Then I had some physical therapy and it became a straightforward process.

“I am really excited because I have never played Joelle [King]. I have grown up watching her play and she is an incredible player. It is a really exciting opportunity and I am looking forward to it.”

Over at the SquashZone venue, Olivia Blatchford Clyne, who is married to Scottish international Alan Clyne, got the better of Scotland’s Lisa Aitken in straight games to book her place in the second round.

The American No.2 will now face the World No.1 in the last 16 of the Oracle NetSuite Open. She will meet Egypt’s Raneem El Welily on Thursday afternoon.

“It’s a good feeling because usually it’s no that way. I was feeling good, I’m happy to be back in San Francisco,” Blatchford Clyne said.

“This is my first time at SquashZone and it’s so cool, this place is awesome. We need more places like this all over the map. But I’m happy to be back and definitely happy with my performance.”

Elsewhere on the first day of the tournament, England’s Emily Whitlock and Frenchwoman Melissa Alves made it through to the last 16 of the event.

In the men’s draw, there was a quartet of different nationalities that made it through. Germany’s Raphael Kandra and France’s Mathieu Castagnet are the two Europeans through to the second round after wins over Iker Pajares Bernabeu and Ramit Tandon.

Blatchford-Clyne’s husband, Alan, meets England’s George Parker today in what could be a feisty first round clash.