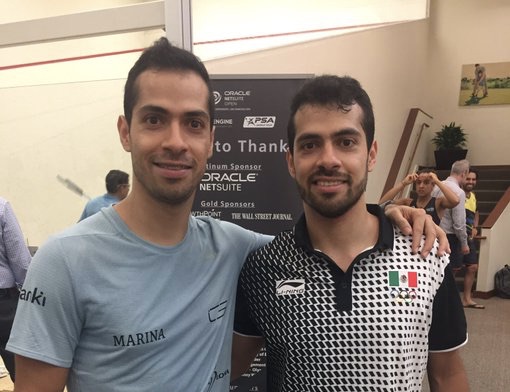 Mexican twin brothers Arturo and Cesar Salazar are through to the second round of the Oracle NetSuite Open after defeating Abdulla Mohd Al Tamimi and Faraz Khan at the Bay Club in San Francisco.

Arturo Salazar, the older of the pair by just two minutes, faced off against Qatar’s Abdulla Mohd Al Tamimi for only the third time on the PSA World Tour, and the Mexican went a game down to the World No.43.

The Qatari No.1 took the first game 11-6 but a quick start for the Mexican in the second put him back in contention. The World No.42 went on to take it 11-3, and he took the momentum into the deciding salvo.

He won the third 11-7 to finish the match off in under half an hour, securing his first victory over Tamimi on the PSA World Tour. Salazar will now face Colombia’s Miguel Rodriguez today (Thursday).

“Abdulla is a top player, so I tried to just play the match point-by-point. I knew I had to fight, so I just tried to run and tried to finish it, and I got it done,” Salazar said.

“I changed my start because in the first game it was very bad, and Abdulla played very well. I changed my play and I tried to stay patient, and I think that was vital in getting the victory.”

Younger brother Cesar also needed to come back from a game down as he got the better of American wildcard Faraz Khan to reach the second round of the PSA Gold event.

The American allowed Salazar just four points in the first game, as he played well above his World Ranking of No.122. However, from then on, the Mexican was able to wrestle back the momentum.

He follows his brother into the last 16 of the tournament, thanks to winning the second and third games against a tiring Khan, and will play No.2 seed Tarek Momen on Thursday.

“I came from behind and I felt I had to win, but tomorrow I need to be a lot better. Faraz is a good player. He has improved a lot, but I still need to play better squash tomorrow,” Salazar said.

“I tried to start to feel the ball a bit more, but my movement and my shots needed to improve for the second and third game. However, it is hard with best-of-three, as you feel more pressure to start with.”

Elsewhere in the men’s draw, Scotland’s Alan Clyne got the better of England’s George Parker, while Mostafa Asal beat Mohamed ElSherbini in an all-Egyptian clash.

In the women’s draw, Hollie Naughton, Milou van der Heijden, Salma Hany and Nele Gilis all won their first round clashes at the Bay Club to move into the last 16.