'Today was one of those days': Dawgs take big CFP hit with inexplicable loss 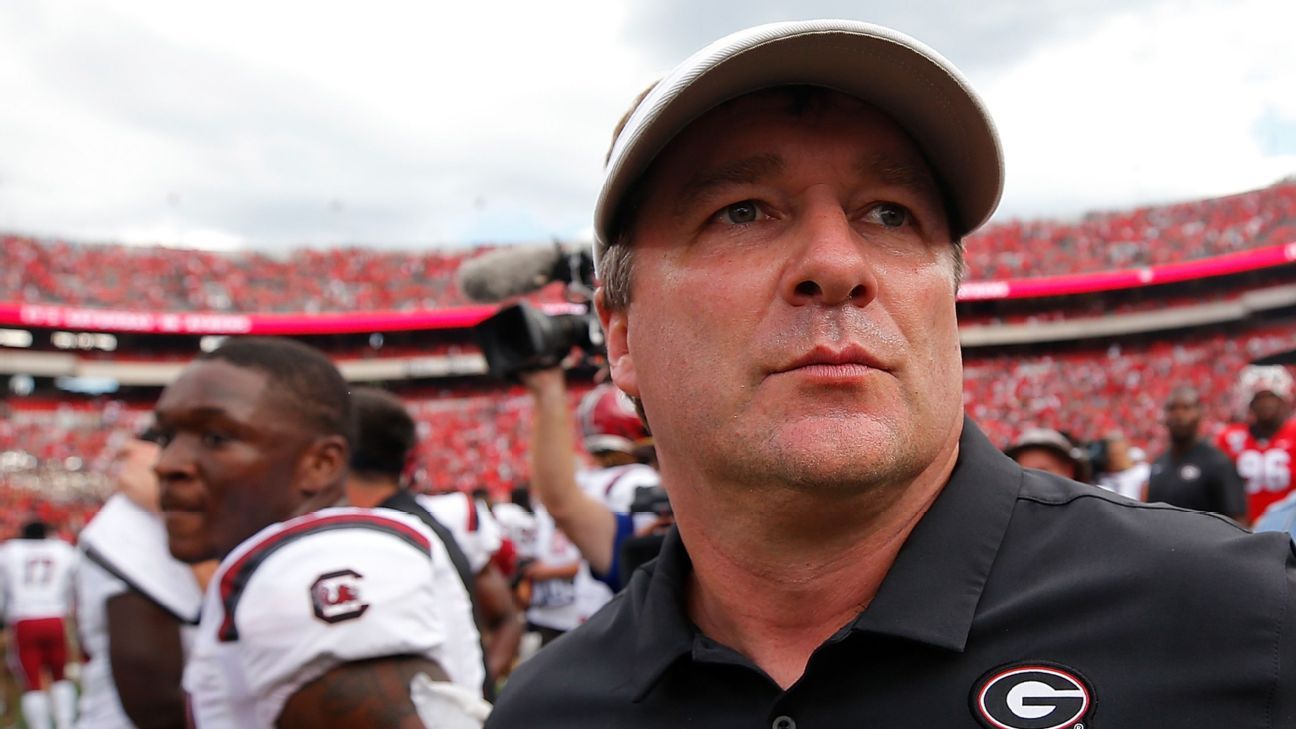 ATHENS, Ga. -- On Saturday morning, two hours before kickoff at Sanford Stadium, South Carolina head coach Will Muschamp stood in the end zone and looked over the field where he once played as a University of Georgia defensive back.

Barely into mid-October, it had already been a long season for Muschamp and the Gamecocks. They lost their starting quarterback after one game. The ensuing 2-3 record had sports talk radio in the Palmetto State already crackling with potential candidates to replace Muschamp when he was inevitably canned. After a must-win victory over Kentucky two weeks ago, the coach wore his reading glasses during his news conference and joked that the long season had aged him and that even his wife was tired of him because she didn't like hanging out with losers.

But on Saturday morning, when asked about his team's chances against third-ranked Georgia, he grinned. "We are going to have to play pretty damn well," he said with a handshake. "And we're going to." It felt genuine, not merely optimistic coachspeak, because of the honesty he displayed next, joking, "We could also use them to not play well. Good plan, right?"

Turns out, it was prophetic. All of it. As evidenced by the even larger smile on Muschamp's face six hours later as the beautifully sloppy 20-17 double-overtime upset became official ... and by the pained grimace of his old friend, Georgia head coach Kirby Smart.

"Coach!" an Athens townie shouted to Smart as the Bulldogs left the field where South Carolina celebrated behind them. The man held up a pair of empty contraband Red Bull cans. "I should have given y'all these four hours ago!"

The Bulldogs did indeed come out flat. To anyone who has watched them closely this season, that should not be a surprise. Every big game and rivalry game the team has played in 2019 has gotten off to a sluggish first half, from Notre Dame to Tennessee to, yes, South Carolina. The difference on Saturday was that, unlike in the first two games, Georgia woke up too late, even later than the slow-arriving home crowd for the noon kickoff.

Cinderella's magic doesn't work at 12:01. Even when your opponent loses its freshman phenom QB in the midst of an otherworldly accurate afternoon (Ryan Hilinski was 15-20 when he left with an injury in the third quarter, replaced by fellow freshman Dakereon Joyner) and you're handed unexpected extra life after a brutal turnover at the start of the first overtime.

"It was pretty simple, really," Smart explained, thumping himself on the chest to make sure everyone knew he was speaking of himself just as much as he was his players and staff. "There was a team here today that showed up ready to go, mentally and emotionally. That team was not us."

Statistically, Georgia was the better team. But to anyone who watched the game, South Carolina visibly beat Georgia in every unmeasurable aspect of the game, from hustle to heart. As for what can be measured, the Gamecocks' special teams kept the Bulldogs pinned back in their own territory and in their own heads all afternoon.

"We did figure out a way to get back into the game," Smart continued. "But you can't keep pushing your luck like that and always expect to bail yourself out."

Those comments felt familiar. So did the performance. It was 364 days ago that Georgia laid a similar offensive egg, then nearly rallied during a gigantic top-10 matchup at LSU. But just like in that 36-16 loss in Baton Rouge, the struggles of quarterback Jake Fromm and his teammates were only partially self-inflicted. The South Carolina defense was stifling, keeping Georgia's third-year starter and his much-hyped offensive line off-balance all afternoon. The Gamecocks intercepted him three times. The last time Fromm threw multiple interceptions was in that 2018 LSU game. The first of those interceptions, his first career pick-six, was the difference in the ballgame. Fromm hurled a personal-record 51 pass attempts, the offense stubbornly trying to stretch the field in the first half. That's not how UGA -- the birthplace of Herschel, Gurley & Co. -- typically tries to make its living. The Bulldogs are now 0-5 in games when Fromm has thrown the ball 30 or more times.

"Some days things just don't feel quite right," Fromm said. "Today was one of those days."

One year ago, as Kirby Smart left Death Valley, he declared that the LSU loss would be a good thing. A wake-up call.

It was. The Bulldogs won five in a row, clinched the SEC East and nearly won the SEC championship in Atlanta before playing in the Sugar Bowl, finishing 11-3 and No. 8 in the final rankings.

That was good enough in 2018, a post-national championship runner-up year that Smart had openly preached would likely be a transition year for the Dawgs.

It will not be good enough this year, a season that Georgia has spent on nearly every College Football Playoff candidate short list since August.

The other teams on those lists have either cruised, earned signature wins or suffered a sloppy scare that still ended with a win. Georgia entered Saturday having already experienced all three. Now the Bulldogs are where those other teams have yet to travel: into the realm of the bad loss. They won't be alone there for long. But they're arguably the first. In the CFP era, that's the last first anyone wants on their résumé.

"It's mid-October and there's still a lot of season left, a lot of big games left," Smart said before departing to no doubt immediately start preparations for next weekend's visit from Kentucky. Like South Carolina, the Wildcats are another unranked SEC East foe off to a disappointing start, with a losing record, a backup quarterback and a head coach doing a "this is making me feel really old" stand-up comedy routine.

"We had a bad day," Smart said. "Now we have to make sure we don't have another one."