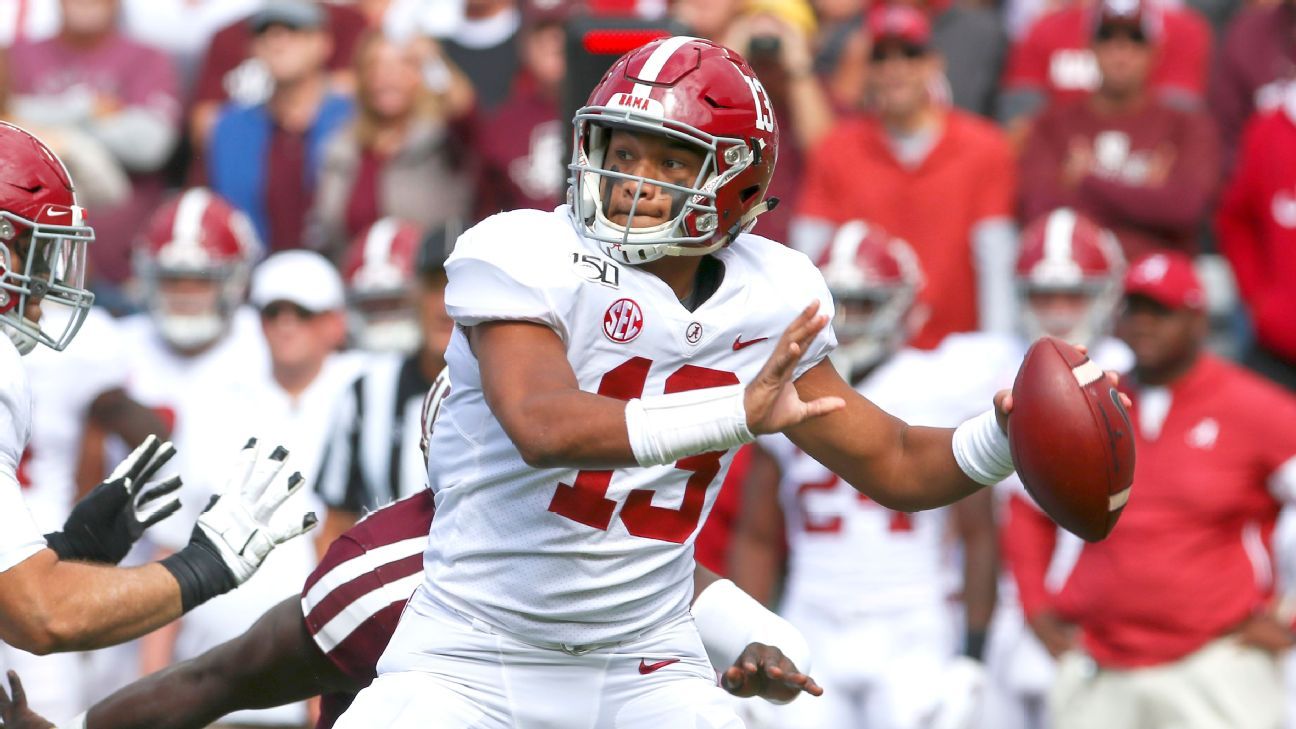 COLLEGE STATION, Texas -- Alabama quarterback Tua Tagovailoa made a little history on Saturday, but neither he nor his coach is dwelling on it much.

During the No. 1 Crimson Tide's 47-28 victory over No. 24 Texas A&M at Kyle Field, Tagovailoa became Alabama's all-time career touchdown pass leader, throwing four to bring his career total to 81. He entered the game tied with AJ McCarron, who previously held the school mark with 77 career TD passes.

"I mean, it's a great achievement, but we're not done yet," said Tagovailoa, who threw for 293 yards. "As a team, we still gotta continue to grow, we still gotta get each other better offensively and defensively and see what we can do better, and we'll move on to next week."

Coach Nick Saban used the milestone as a chance to dive into one of his signature rants, calling back the "rat poison" speech from Alabama's 2017 trip to Aggieland.

"Well, it means he's had a great career to this point and we certainly appreciate his competitive spirit, the way he prepares for games, his leadership, the way he practices, his ability to help us score points on offense," Saban said of Tagovailoa. "He's very instinctive, so it means a lot from that standpoint, but it also doesn't mean much when it comes to, 'What are you going to do in the future?' And I think he has an opportunity, based on the type of offensive team we have, to have great production if he can continue to just stay focused on what we want to do.

"I mean, this is where -- this very seat is where 'rat poison' was born," Saban continued. "So I remember that two years ago, all right? And when I hear things in the media about whether guys are first-round draft picks or they're setting great records and all that type of thing, that's not really what I like for players to be focusing on right now.

As Saban's postgame news conference wrapped, he said with a smile to reporters, "But I appreciate y'all."

After Alabama beat Texas A&M 27-19 in College Station on Oct. 7, 2017, Saban first used the term "rat poison" when commenting on his team's lack of offensive success early in that game.

Tagovailoa, a junior, has an FBS-high 27 touchdown passes this season for the Crimson Tide (6-0, 3-0 SEC). He threw his first interception of the season with two minutes remaining in the second quarter. Texas A&M defensive back Demani Richardson picked off a Tagovailoa pass in the end zone.

"I think it was a good play by [Richardson]," Tagovailoa said. "I think it was bad on my part. I kinda stayed on one [receiver] too long. The outside guy wasn't there, I tried to hang on Jerry [Jeudy], then I forced the ball. But we had [Jaylen] Waddle underneath. It's something I can learn from."

The Aggies (3-3, 1-2) trailed 24-13 at the half but never got closer than that. Waddle (128 punt return yards) and Henry Ruggs III (131 kickoff return yards) helped Alabama gain a massive field-position advantage throughout the day. The Tide's average starting field position was Texas A&M's 47-yard line, whereas the Aggies' was their own 22. DeVonta Smith led the receiving corps with seven catches for 99 yards and a touchdown. Waddle and Ruggs each caught touchdowns as well.