How Man City used title race to get over UCL heartbreak 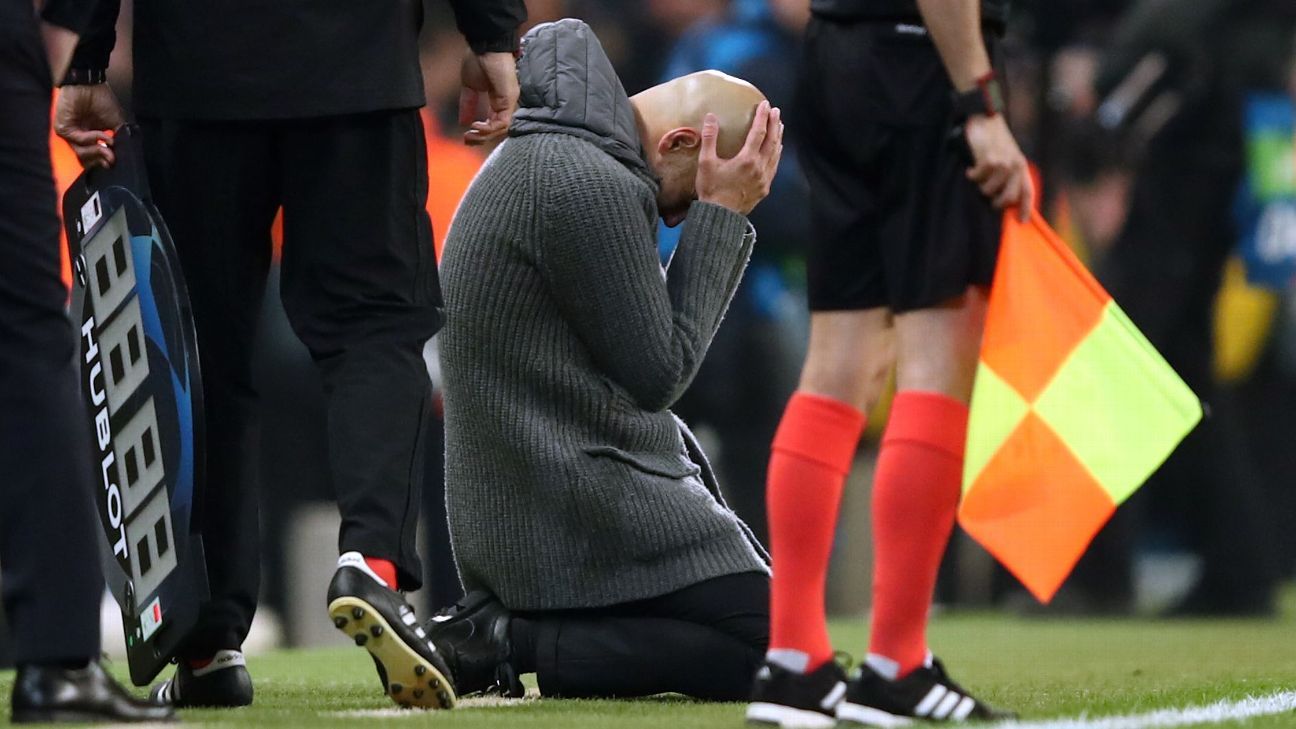 More than an hour after Manchester City's exit from the Champions League last week, Sergio Aguero was sitting in the dressing room still wearing his kit. The laid-back striker is normally the last to leave -- be it off the team bus arriving at the stadium and from the ground after the final whistle -- but this time was different. Aguero was crestfallen, tears in his eyes after City's brutal quarterfinal exit at the hands of Tottenham.

The manner of that defeat was, in Pep Guardiola's words, cruel. Raheem Sterling's 94th-minute goal was celebrated with raw passion and emotion as Spurs players collapsed to the pitch. But just 73 seconds later it was ripped away when the video assistant referee correctly chalked off the effort for offside and, with that, City's dream of European success slipped out of reach for another year.

For some of the club's older players the defeat was hard to take, knowing that they may only have one or two more shots left at winning the Champions League. Among them Fernandinho, who turns 34 next week. The Brazilian has played some of the best football of his career this season, but he couldn't hide his anger as he slammed open the door to the mixed zone. Asked for a comment about the defeat, he simply replied: "F--- VAR."

The introspective David Silva, 33, slipped out of a backdoor from the Etihad Stadium knowing his impressive medal collection from winning the World Cup, European Championship, Premier League and FA Cup may forever be short of the Champions League. Captain Vincent Kompany, also 33 and for the past 10 years the leader in the dressing room and adept at dragging his teammates out of difficult times with his positivity, was typically the one to stay to console Aguero -- the Argentine, so often the hero, feeling the weight of his first-leg penalty miss that was to prove to be so important.

But as well as the frustration over City's exit, Guardiola was fearful that the pain of that defeat had the potential to wreck their entire season. With no let-up from Liverpool in their tight and tense title race and a Premier League rematch against Spurs just over 48 hours away, the City boss felt he needed to quickly re-energise his squad to get them focused once more.

There were no strong words from the City boss in the dressing room after the 4-3 victory that ultimately proved not enough due to the away goals rule, only praise echoed when he spoke to reporters. "I am so proud of the players and the fans," he said shortly after full-time.

The City boss was also determined to ensure his players were not motivated by revenge despite some frustration over the way Fernando Llorente's decisive goal was reviewed by VAR and the onfield referee not given an angle that showed the ball hitting the Spanish striker's elbow before going in.

His players were back at the Etihad Campus the following day with the mood considerably gloomier. Guardiola felt he had to make changes for a third game against Spurs in 12 days after a draining evening, which is when the enthusiasm of Phil Foden shone through. The 18-year-old is constantly pushing for his first-team opportunities, working tirelessly in training and heeding the advice of Guardiola, assistant Mikel Arteta and the rest of the coaching staff.

Guardiola has no doubts about Foden's ability, but has held him back to grow his experience around the first team. But with his energy and fearlessness needed for the Spurs rematch, Guardiola decided to throw him in for just his second Premier League start. It worked perfectly with the teenager scoring the only goal after just four minutes. But his players were exhausted and, in the final 20 minutes, City switched to survival mode and it was a mixture of delight and relief that greeted the full-time whistle. "As a footballer, I could not have done what my players have done today -- the title is still in our hands," Guardiola said after the game.

They would, however, only move top of they could navigate Wednesday's Manchester derby -- a date ringed on many pundits' calendars as the potential pivotal fixture of the run-in. While some Liverpool and United fans were conflicted over what result they wanted, there was no expectations from inside City for anything other than a feverish derby against Ole Gunnar Solskjaer's side.

For all their recent bad form, United had not lost at Old Trafford in the Premier League since August. Guardiola decided he needed experience to deal with the intensity, recalling Kompany, David Silva and Fernandinho -- players who have delivered time and again on derby day.

As Leroy Sane -- who had come off the bench for the injured Fernandinho -- slammed in the second to secure victory, Guardiola bent double in celebration, fists clenched, with the Premier League's destiny remaining in his hands. It couldn't have a bigger contrast to the sight of the Catalan sinking to his knees in despair almost exactly a week earlier when VAR cut short the pandemonium that followed Sterling's late strike.

Guardiola will keep minds sharp and focused on the three games that remain and the three victories required even if they have survived the two toughest games of their run-in. But there won't have been a more important week if City are to hold off the challenge of Liverpool in the fiercest title race in Premier League history.