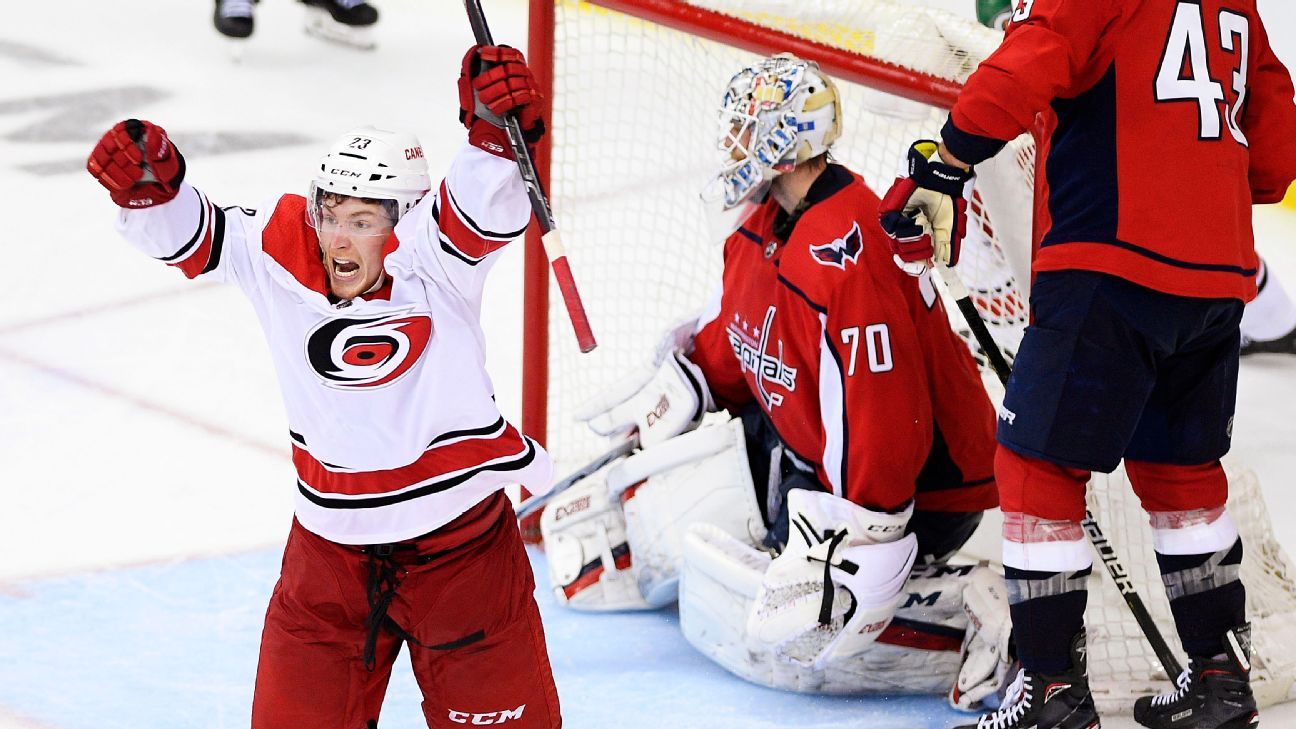 Welcome to Round 2. You'll notice there are no division champions here. That has not happened since the 1967 expansion. It has been that kind of postseason.

Here's what happened in the NHL last night (check out replays of every playoff game on ESPN+) and what to watch for tonight, in today's edition of ESPN Stanley Cup Playoffs Daily:

Game 7: Carolina Hurricanes 4, Washington Capitals 3 (Hurricanes win series 4-3). What an odd feeling, but perhaps an appropriate one in a postseason this chaotic: the feeling of inevitability as a No. 7 seed takes a No. 2 seed to overtime. The Hurricanes looked determined. They looked fresh. They looked, frankly, dominant. So when Brock McGinn scored 11:05 into the second overtime -- on an assist from Justin "Mr. Game 7" Williams himself -- it felt like the logical conclusion, reputations and regular seasons mattering not.

The Capitals took a 2-0 lead in the first period. Sebastian Aho's short-handed goal in the second cut it to 2-1. It was 3-1 when Teuvo Teravainen snapped a shot past Braden Holtby at 16:37 of the second. Then Jordan Staal tied it at 2:56 of the third. Carolina outshot the Capitals 18-6 in overtime. They earned this win over the defending Stanley Cup champions. And, in turn, they deprived us of the Capitals vs. Barry Trotz matchup we all wanted. What a bunch of jerks ...

1. Brock McGinn, Carolina Hurricanes. McGinn will forever be remembered for his double-overtime goal to end the third-longest Game 7 in NHL history. But it wouldn't have mattered had he not made this diving swipe of his stick when a puck trickled through Petr Mrazek late in the third period. "It's just a reaction there. I saw it kind of squeak through Petr there a bit. I don't know if it had enough steam to cross the line, but I don't think I was taking that chance," McGinn said after the game.

2. Jordan Staal, Carolina Hurricanes. Staal was acquired from the Penguins in June 2012. At the time, he had appeared in 73 playoff games and won the Stanley Cup in 2009. He didn't appear in another postseason game until Game 1 against the Capitals, and boy did he rise to the occasion: His third-period goal tied Game 7 and gave him three goals and three assists in seven games, including the eventual winner in Game 6.

3. Andre Burakovsky, Washington Capitals. Golf clap for the Capitals forward, who made a great move to put them on the scoreboard at 2:13 of the first period, his first postseason goal since Game 7 of the 2018 Eastern Conference final.

What else could it be but McGinn's double-OT series clincher? "What a moment. What a game," McGinn said. "In between periods, we were talking about putting everything on net. In overtime, anything can happen. If you just keep putting it on net, good things will happen."

Todd Reirden. Yes, the Capitals had the misfortune of losing a key forward (T.J. Oshie) and a key defenseman (Michal Kempny) for this opening-round series. No, Reirden is not the only coach to ever watch his Capitals inexplicably lay an egg on home ice in a Game 7. But the facts are the facts: The defending Stanley Cup champions are out in the first round to a wild-card team, and Barry Trotz swept Sidney Crosby to continue coaching in the playoffs with the New York Islanders. For the Capitals, that's gotta sting.

Alex Ovechkin expresses his frustration and disappointment with the Capitals' Game 7 double-overtime loss to the Hurricanes.

This is a case study in momentum. The Blue Jackets had it when they shocked the Tampa Bay Lightning in the first round, winning seven of eight games to qualify for the playoffs before sweeping the Bolts. But they haven't played since April 16, and no scrimmage can replicate playoff hockey. Boston, meanwhile, played Tuesday, closing out Toronto in seven games.

This could be the goalie duel of the second round, as Vezina Trophy finalist Ben Bishop takes on rookie sensation Jordan Binnington. The Stars beat the Blues three times in four games in the regular season, with two of those wins coming against Binnington.

The Canes declare, "We ain't done yet, baby!" (and a bunch of other things that were bleeped out by a goal horn).

"I don't know how far that we're going to take this, but I know we're going to give everything we can." -- Hurricanes coach Rod Brind'Amour after his team's Game 7 victory.