Pastrana Battling Williams In One Lap Of America 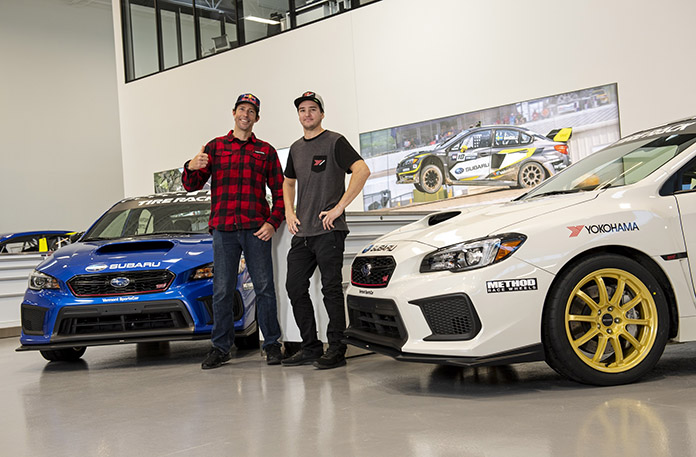 SANTA ANA, Calif. – The 35th running of One Lap of America will feature the Travis vs. Bilko show, courtesy of Yokohama Tire and Subaru of America.

Yokohama is sponsoring the two drivers in the contest, which runs May 4-11, and Subaru Motorsports USA will provide a pair of WRX STI Type RA vehicles for a head-to-head showdown.

Nitro Circus ringleader Travis Pastrana and fellow Nitro Circus member Blake “Bilko” Williams, both Team Yokohama members and the winners of last year’s Stock Touring division in a Subaru WRX STI, are back again with a twist. This time, instead of being teammates, Pastrana and Williams are taking each other on in the eight-day, 3,379-mile race.

“Travis and Bilko are both super competitors so I’m sure they’ll put on a show in this classic race,” said Fardad Niknam, Yokohama’s senior director of consumer product planning and product marketing. “They’ll be on the new ADVAN A052 tires for One Lap 2019, so it’ll be interesting to see who comes out on top.”

“The WRX STI Type RA was designed to be track-ready without sacrificing comfort for the street,” said William Stokes, motorsports manager for Subaru of America. “With One Lap demanding both serious track performance and long-distance highway driving, Travis and Bilko will definitely be putting their cars to the test.”

“Last year’s One Lap event was a blast,” Pastrana said. “Bilko and I got a chance to experience the event and push the Subaru WRX STI and Yokohama tires to the limits. We decided at the end of last year’s event that we had to do it again…but on different teams. This year is going to be even better.”

Pastrana is ready. His co-driver this time is author and former Navy Seal Marcus Luttrell.

“I’m going with the ‘Lone Survivor,’” he said. “He’s mentally tough and has experience behind the wheel.”

“Last year was such an awesome time,” said Williams. “I had a blast battling with the competition and also the on-going rivalry with Travis. I can’t thank Yokohama, Nitro Circus and Subaru Motorsports USA enough for the support, and the crew from One Lap for putting on such a rad event!”

One Lap of America started in the early 1970s when auto journalist Brock Yates created the now infamous Cannonball Sea-to-Shining-Sea Memorial Trophy Dash – a flat out, no-holds-barred race from New York City to Redondo Beach, California. In 1992, Yates configured the Cannonball One Lap of America into the format it uses today: nearly 24 hours a day of driving with competitions taking place as time trials on race tracks throughout the country.

More in this category: « East Carolina Backs Weatherman & Ware At Bristol Majeski Adds Talladega To ARCA Slate »
back to top