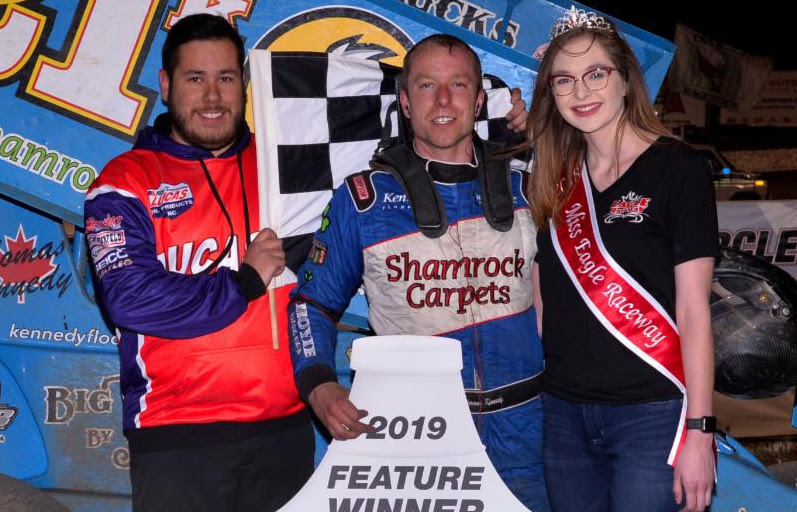 EAGLE, Neb. — Leading the only lap that pays, Canadian Thomas Kennedy made a stunning last-lap pass of Matt Covington to win with the Lucas Oil American Sprint Car Series presented by the MAVTV Motorsports Network Thursday night at Eagle Raceway.

“I knew I had the fastest car; it was just a matter of time and I was either going to make it or break it,” said Kennedy. “Luckily traffic held him [Matt Covington] up a bit and I was able to get underneath him, but this is awesome. Especially starting 13th and wheeling my ass all the way to the front.”

The Buffalo Wild Wings No. 21k rolled to the white flag with a nearly half straightaway disadvantage to the A-Rock Materials No. 95 of Covington. Finding his lane blocked by slower cars through the first and second turns, the brief slowdown by Covington was just enough for Kennedy to pounce. Rushing the bottom of the high-banked oval, Kennedy made the pass off the second turn.

Racing into the final two turns, Covington tried to retake the top spot but would have to settle for second.

“Last week it was lapped traffic that won me the race, and tonight I lost it. I just took it too easy on them. These guys out here are fast, and you have to go every lap and I just got conservative and gave it away,” explained Covington.

A field of 35 was on hand for the Track Enterprises promoted event.

More in this category: « East Carolina Backs Weatherman & Ware At Bristol VanderBeek Breaks Through At 81 Speedway »
back to top