VanderBeek Breaks Through At 81 Speedway 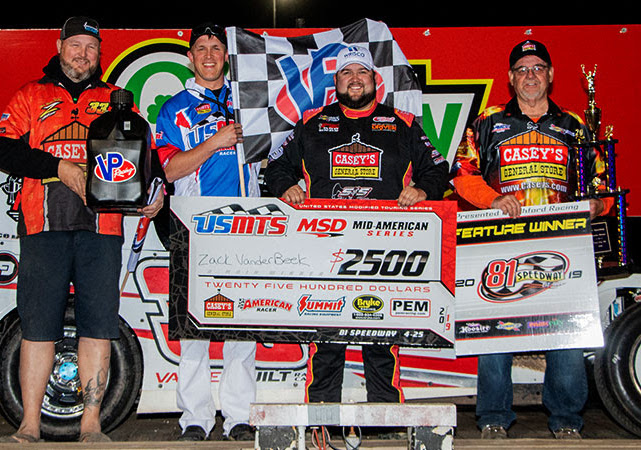 PARK CITY, Kan. — After several near misses in the early going this season, Zack VanderBeek found the road to victory lane and garnered his 48th career USMTS win at 81 Speedway Thursday night.

The 34-year-old from New Sharon, Iowa, hasn’t employed any drastic measures to get faster, just plugging away.

“We made some little changes, but we’re just working hard and not giving up,” he said. “It’s a heck of a lot easier when you can start in front of these guys.”

About 20 minutes and 40 laps later, ‘The Z-Man’ finally had a checkered flag to take home from C. Ray Hall’s historic facility-a place where VanderBeek had piled up several near-misses over the last decade.

“King of America was tough, and then going down south there’s a lot of good cars,” VanderBeek added. “We’ve been kind of right there but you just have to get in the right position. I think we’ll have some more wins this year.”

Conversely, Rodney Sanders has a series-best four triumphs at the 81 Speedway and two wins under his belt this season already. This time, however, “The Sandman” had to follow his long-time nemesis to the finish line.

Sanders chased Schniepp for the first half of the main event before eventually working his way into second, but he was never able to mount a serious challenge on the leader despite two caution flags late in the race.

“Once I got to second, I knew Zack was probably not going to make a mistake,” said the 2013 and 2014 USMTS National Champion. “At that point, I was just trying to save my right rear tire and just kind of hang on.”

For his part, Schniepp kept pace with the lead duo until the end, coming home with a career-best third-place USMTS finish, holding off Ryan Gustin over the final laps.

Jake O’Neil returned to USMTS action after nearly a month off to recover from an apparent staff infection in his legs, and snatched a top-five finish.