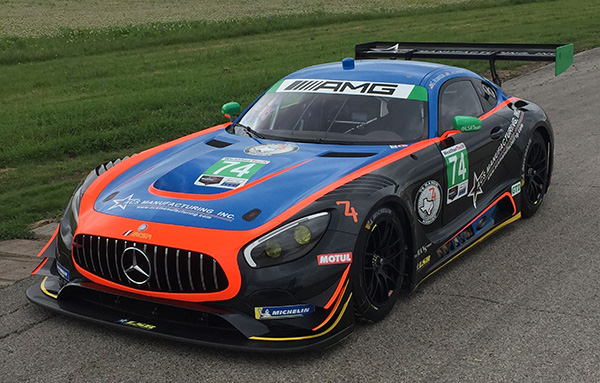 Racing with the support of ACS Manufacturing and 74 Ranch Resort, Robinson and Aschenbach will make their first start together next weekend at the Mid-Ohio Sports Car Course. It is the first of five IMSA GT Daytona races scheduled for the No. 74 team this year and will be followed by the Detroit Grand Prix, Canadian Tire Motorsport Park, Road America and Virginia Int’l Raceway.

“Texas is in my blood, it’s my family and history,” Robinson said. “To work with Lone Star Racing in Texas feels right at home. We have the same mindset and way of doing things. For example, in 1992 my Dad always ran ‘Don’t Mess with Texas,’ which was an anti-littering campaign, on his cars. When I showed up to the LSR shop the first decal I noticed was ‘Don’t Mess with Texas.’ I’ll just say we all know what proper barbecue and tacos are!”

Lone Star Racing is based the greater Dallas-Fort Worth area in Cresson, Texas, while Robinson grew up in San Antonio.

“Gar fits right in with Lone Star Racing and we are going to have a lot of fun together both on and off the track,” said Lone Star Racing Team Manager AJ Petersen. “We all appreciate the ongoing efforts and commitment of Lone Star Racing team owner Dan Knox with our 2019 program.”

Robinson is a two-time champion in the Trans-Am TA2 class, with titles in 2015 and 2017. He was also the Rookie of the Year in Trans-Am during his 2015 championship run. Robinson also finished third in his only previous IMSA GT Daytona class start at the Rolex 24 At Daytona.

Aschenbach is a four-time champion in what is now known as Blancpain GT World Challenge America, most recently in 2014. In 2005, he became the first rookie to earn that series championship. In IMSA competition, Aschenbach was the 2010 ST champion in the then-Continental Tire Sports Car Challenge and the 2014 Lamborghini Super Trofeo Pro-Am world champion. He most recently captured a win in the GT Daytona class in 2017 at Canadian Tire Motorsports Park.

“Confidence is the word that comes to mind when I think about this program,” Aschenbach said. “We have an experienced, race-winning team and two championship-level drivers teaming up for the IMSA Sprint Cup season. Everyone has a clear goal and that is to race for podiums. I’m excited to get things rolling at Mid-Ohio with Lone Star, Gar, and the Mercedes-AMG GT3.”