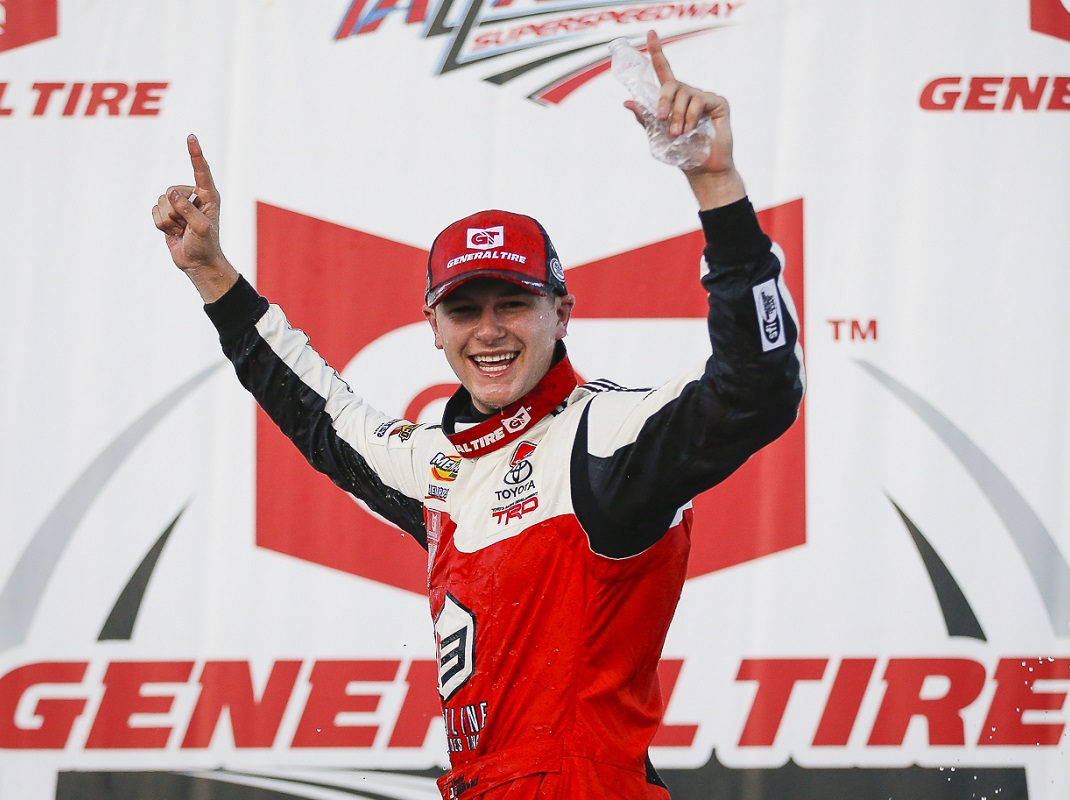 TALLADEGA, Ala. – Todd Gilliland got his redemption for a near-miss in the ARCA Menards Series opener in February with a resounding victory in Friday’s General Tire 200 at Talladega Superspeedway.

Gilliland took control of the race on lap 43, following the conclusion of a sequence of pit stops that was interrupted by a mid-race caution flag, and never gave up the top spot again after that.

The 18-year-old led the final 34 laps uncontested en route to his second-career ARCA victory, holding off a final-lap charge from Riley Herbst and Brandon Lynn that fizzled out before the finish line.

“That was incredible. All around, this was such an amazing race for us,” said Gilliland, who finished second during Daytona Speedweeks two months ago. “Being back with DGR-Crosley makes this special, and this car was incredible. They (Herbst and Lynn) couldn’t catch me, even doing all they could. That says a lot about what this team gave me to work with all race long.

“We were going to destroy them at Daytona, and I’m so glad we were able to come back here and make this happen today, even if it was kind of last minute,” he added. “I’m just super pumped up right now.”

Friday’s performance marked Gilliland’s first triumph in ARCA competition since he went to victory lane in his series debut at Toledo (Ohio) Speedway back in 2015, and his first victory in any racing series since April of 2018 at Bristol (Tenn.) Motor Speedway in a NASCAR K&N Pro Series East car.

For Gilliland, it was a victory that was way overdue.

“It’s been a long time since I’ve been to victory lane. We needed this one today and I needed it,” Gilliland said. “People have been talking, but the weight is for sure less on my shoulders now, dude.

“Wins are wins, whether it’s here or at a short track … whatever it is; there’s no feeling like getting sprayed by water and Gatorade in victory lane.”

The turning point in the race came when the top six cars – led by Sean Corr – came down pit road for green-flag service on lap 39, just moments before a crash between Christian Eckes and Thad Moffitt broke out as they tried to duck off the race track themselves at the exit of turn four.

That led to a caution flag which allowed Gilliland to cycle through to the race lead, and he took full advantage of his newfound track position and clean air after that.

While a hard crash in turn one by Tommy Vigh Jr. did necessitate one final restart with 20 laps left, Gilliland turned back every advance from behind and took the checkered flag in front by .149 seconds.

Gilliland’s dominant No. 4 Frontline Enterprises Camry left Herbst to settle for second in his No. 18 Monster Energy Camry.

While it was a strong day in terms of the ARCA owner’s championship for Joe Gibbs Racing, it wasn’t what Herbst hoped to leave with, after feeling like he had a shot at the win in the closing laps.

“I don’t know what more we could have done,” Herbst said. “Second just sucks, really bad. I thought we had a run in those final laps, but Todd’s car was really, really fast and that’s all we came home with.”

Eckes was unable to continue after hitting the outside wall during his shunt with Moffitt just after the mid-point of the race. He was credited with last place in the 26-car starting field.

More in this category: « East Carolina Backs Weatherman & Ware At Bristol Sweet Stops Gravel At Lake Ozark »
back to top