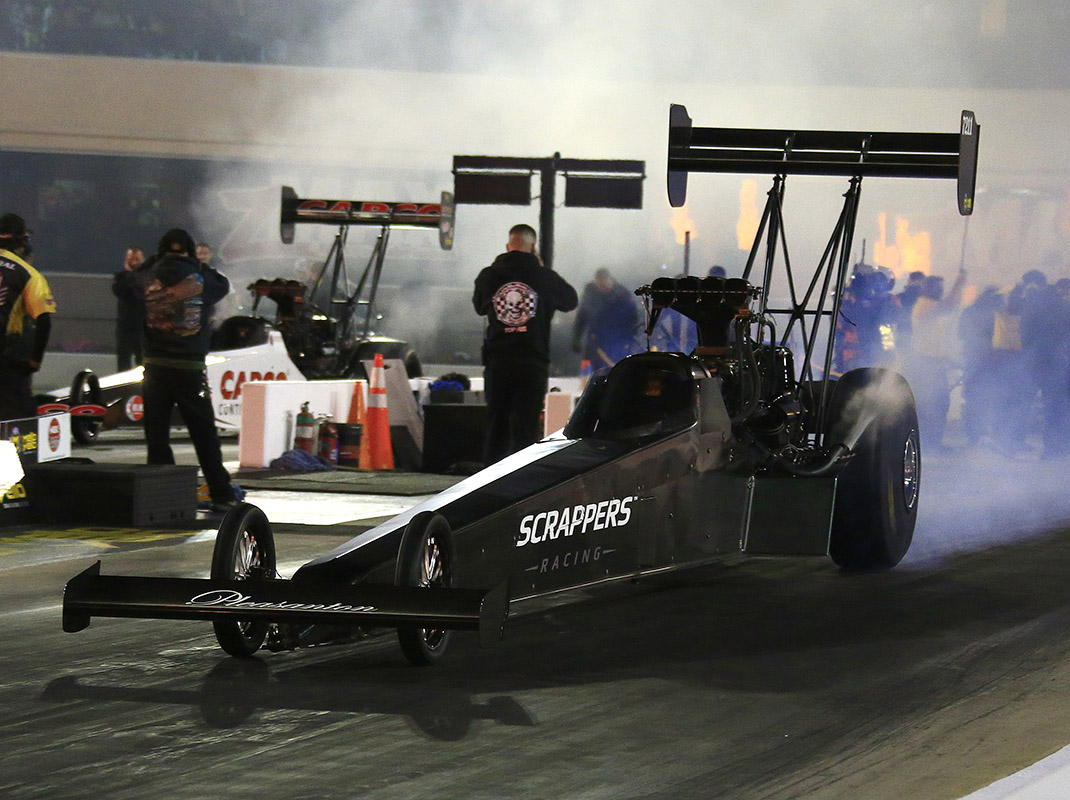 An afternoon thunderstorm that dropped rain and hail around the facility also brought with it high winds. Officials attempted to start qualifying around 6 p.m., but a trio of Funny Cars attempted and failed to make full passes down the track.

After all was said and done, Mike Salinas (Top Fuel), Jack Beckman (Funny Car) and Karen Stoffer (Pro Stock Motorcycle) ended the day as provisional No. 1 qualifiers in their respective divisions.

Salinas, driving his Scrappers Racing Top Fuel dragster, set a zMAX Speedway track record with his 3.687-second time at 327.43 mph. He was one of four Top Fuel competitors who completed full runs down the track in the tough conditions.

“The day was a little crazy,” said Salinas, who earned his first Top Fuel victory earlier this year in Four-Wide competition at The Strip at Las Vegas Motor Speedway. “We knew the way the track was prior that it wasn’t going to hold much of anything. I actually saw Alan (Johnson) tune the car down, so I think it could have run a little bit better.

“He’s a genius at what he’s doing, so the nice part about it is the car did exactly what we wanted it to do.”

Antron Brown is currently second in the Top Fuel division thanks to his 3.725-second run at 327.03 mph. Terry McMillen sits third after the first round of qualifying following his 3.728-second run at 320.36 mph.

Beckman was the only competitor in the Funny Car class to complete a full run down the track. Beckman put together a 3.891-second pass at 321.42 mph in his Infinite Hero Dodge Charger R/T Funny Car for Don Schumacher Racing.

“There are a lot of times when there is a huge delay, huge weather issues and we’ll wait around all day to tow up there and stink,” Beckman said. “It’s really disappointing to invest that much time and energy and not go up there and put on a show not just for the fans, for our team.

“I can tell you that at 300 feet I knew. That thing was stuck, it was pulling, it was the quickest 60 foot I’ve ever had. It actually had way more in it, it just wore the clutch out of it at half track and wound up dropping a hole. It was just on a beast of a run.”

Second on the qualifying sheet belonged to John Force Racing’s Robert Hight, who slowed just prior to the finish line to a time of 3.935 seconds at 285.11 mph. Jeff Diehl qualified third with a 4.172-second run at 267.64 mph.

Terry Haddock was originally scored third fastest, but it was determined that he made contact with the wall prior to crossing the finish line, resulting in his run being disallowed.

More in this category: « East Carolina Backs Weatherman & Ware At Bristol Gilliland Gets Redemption With Talladega ARCA Win »
back to top