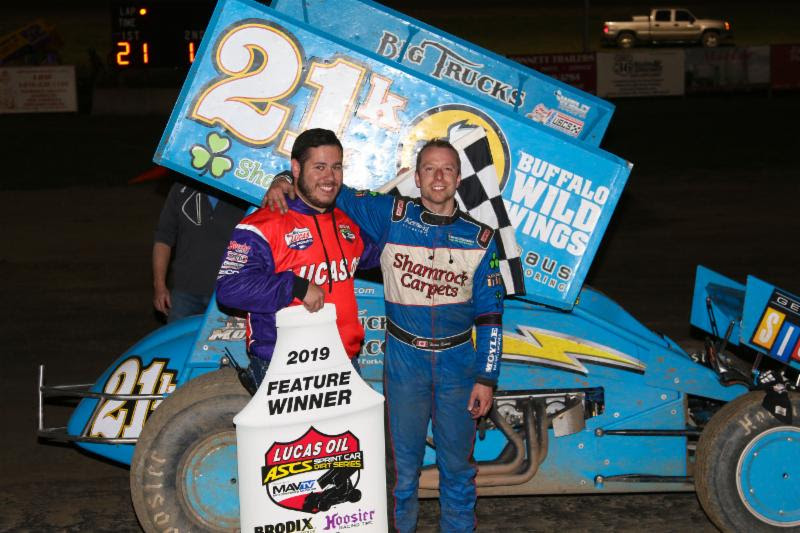 OSBORN, Mo. — Making it two-for-two on the weekend with the Lucas Oil American Sprint Car Series presented by the MAVTV Motorsports Network, Thomas Kennedy was unstoppable on the cushion on the high-banked U.S. 36 Raceway on Friday night.

“Big kudos to my dad. We’ve been busting our butts every year, all year. I really appreciate all the support we get to be out here from people like my mom, my brother, my wife especially, and my grandparents. It really means a lot,” stated Kennedy.

Taking the green fourth, Kennedy chased the opening laps as Wade Nygaard took command for four laps before surrendering the top spot to Roger Crockett with the Rt. 66 Chevrolet No. 11 working the low side of the speedway.

Followed by Scott Bogucki, who worked quickly from seventh, the pair began battling for the top spot as lapped traffic came into play. Working the hub at both ends of the one-third mile oval, the top was wide open for attack and as the laps clicked to 10, that attack was coming in the form of Kennedy.

Railing the cushion off the second turn on lap 11, Kennedy’s powder blue No. 21k followed slower cars into the third turn with the leaders racing middle to bottom. With the lane clearing, for Kennedy, the move for second turned into a two-for-one sale for all the marbles with Kennedy rocketing to the lead off the fourth turn.

On coming up with the move for the lead, Thomas explained, “Everybody was everywhere, and I knew I just had to be patient up top. My car was great so I figured if I tried down low, I might screw myself up and lose some time. It’s all about momentum, and this track you have to keep your momentum up to keep moving forward.”

Putting several slower cars between himself and the race for second, the field came under caution on lap 13. Giving Kennedy a three-car buffer on the restart, no one would be able the keep pace with the Canadian shoe crossing under the checkered flag with a 2.902-second advantage.

Roger Crockett held on for second with Blake Hahn charging through the field from 10th to grab the final podium step. In a drag race off the final turn for the fourth position, the advantage was to Seth Bergman, who edged Scott Bogucki by .014 seconds.

More in this category: « East Carolina Backs Weatherman & Ware At Bristol Pearson Goes The Distance In Oklahoma »
back to top