Pearson Goes The Distance In Oklahoma 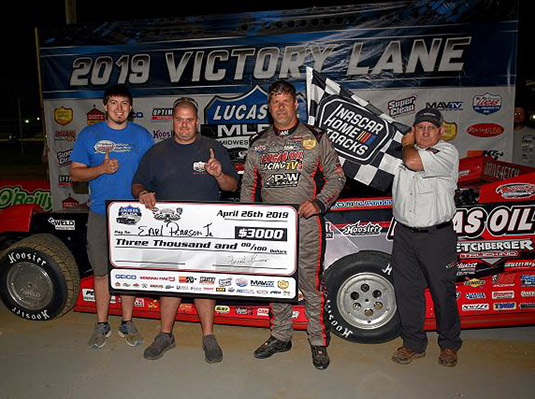 MUSKOGEE, Okla. – An unplanned visit to the Thunderbird Speedway paid off on Friday night for Earl Pearson Jr. as he captured the $3,000 Lucas Oil MLRA main event presented by Bravado Wireless.

Following an early cancellation of the Lucas Oil Late Model Dirt Series event scheduled for Tri-City Speedway in Granite City, Ill., Pearson and his Black Diamond race team made the haul to the half-mile track located in Muskogee, Okla., and led then entire distance en route to the win.

Coming into the weekend second in the Lucas Oil Late Model Dirt Series standings, Pearson would line up on the outside front row for the 25 lapper alongside pole award winner Will Vaught. Pearson jumped to an early advantage as the duo crossed the stripe and was able to clear the XR1 Rocket of Vaught exiting turn two.

In a race that would go the distance caution free, Pearson easily cruised to the win, with his biggest competition coming from lapped traffic as the race progressed. Vaught crossed the line in the runner-up position, coming in 3.025 seconds behind Pearson, who collected his fourth win with the MLRA series.

“That was going to be the race (turn one) there ain’t no doubt about it,” Pearson said of the start. “He (Vaught) slipped up there and the track took a little bit of rubber right around the bottom, so once we got out in front I just had to stay on the bottom and run my own race.

“Any time we’re not on the Lucas Series we enjoy coming over and running the MLRA.”

Payton Looney methodically made his way through traffic to finish third. Mitch McGrath and Logan Martin completed the top-five.

More in this category: « East Carolina Backs Weatherman & Ware At Bristol Bridges Romps At Smoky Mountain »
back to top