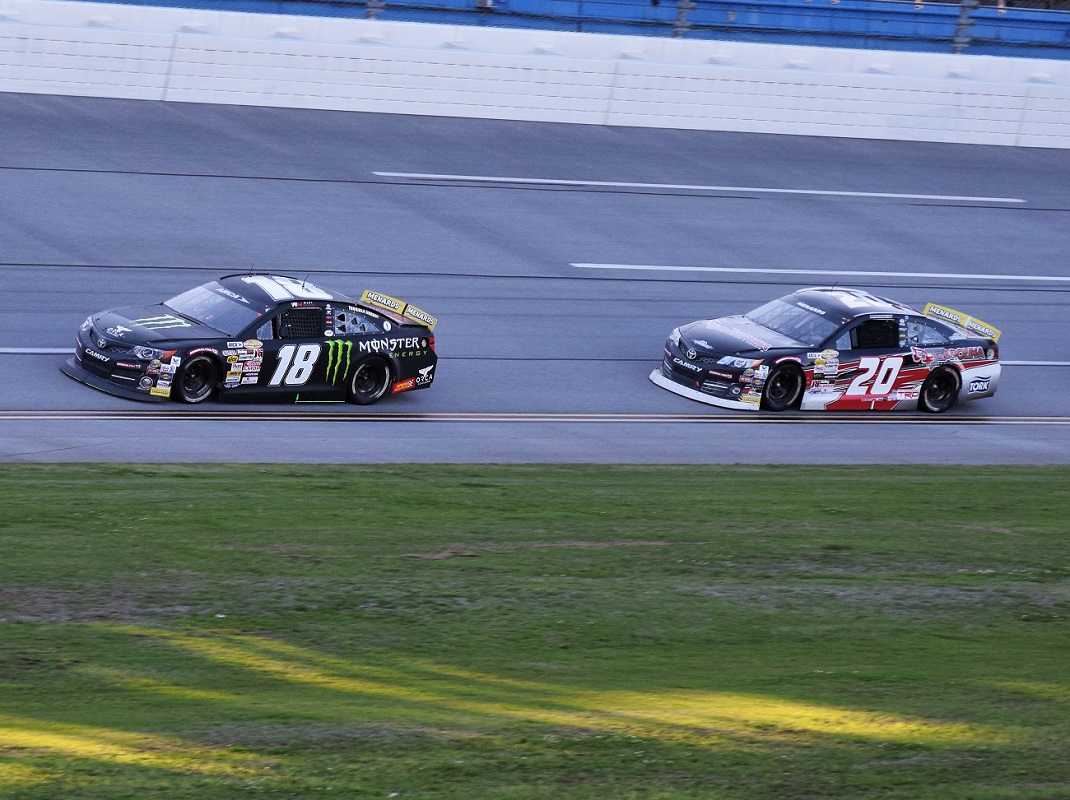 TALLADEGA, Ala. – In the final laps of Friday’s ARCA Menards Series race at Talladega Superspeedway, a lack of cars in the lead pack may have contributed to Todd Gilliland’s ability to pull away from his pursuers, but there was another important factor in the heads of several contenders as well.

Both runner-up Riley Herbst and third-place Brandon Lynn were thinking heavily about their teams’ position in the owner’s championship standings, trying to maintain and protect as much as they were trying to “go for broke” and capture the checkered flag.

“In the back of my mind, I was thinking about the fact that we’re running for the owner’s title this year, and Ty (Gibbs) has had some really solid runs lately,” Herbst noted. “My job was to back (up) Ty’s good runs and support the team … so that we can get to Kansas with a shot at the owner’s championship.”

That philosophy meant that as much as the pair of young guns may have wanted the anvil trophy that was ultimately collected by Gilliland, they had to balance their own goals with those of their teams.

“I believe the (No.) 20 is leading the owner’s points right now – I know it was coming into this race – so that was one of our main goals, was to keep the team in the lead,” Lynn said. “Hopefully they still have the lead in those standings after this race. That’s all we’re doing, is trying to get that owner’s championship for Venturini Motorsports at the end of the year.”

With four laps to go in Friday’s race, Herbst was given a directive over his team radio to not “give anything up,” a request he followed to the letter en route to his runner-up finish.

“I wouldn’t say I was forced (to settle), but I definitely had to stick to the yellow line,” said Herbst. “I saw the guys behind me starting to brew up some things, but (Rick) Carelli just told me to stay patient and stay in line as long as I could.

“We did that and came home second, along with some good points for this team.”

Leaving Talladega, Herbst and the No. 18 team jumped past the Venturini Motorsports No. 15 team of Christian Eckes and up to second in the owner’s championship race, with Lynn and the No. 20 team maintaining their position atop the standings.

That meant that both drivers accomplished their mission, even if it did come with the price of missing out on a victory at Talladega.

“As drivers, we don’t come here to do anything but get a victory, but we checked a lot of boxes for our team,” added Lynn. “Hopefully this gives us some positive momentum for the future.”

While it may do exactly that, the owner points fight still arguably stifled the finish of Friday’s race.

Whether those decisions pay off for either the No. 20 team or the No. 18 team later in the year remain to be seen.

More in this category: « East Carolina Backs Weatherman & Ware At Bristol Golobic Pounces For Petaluma Score »
back to top