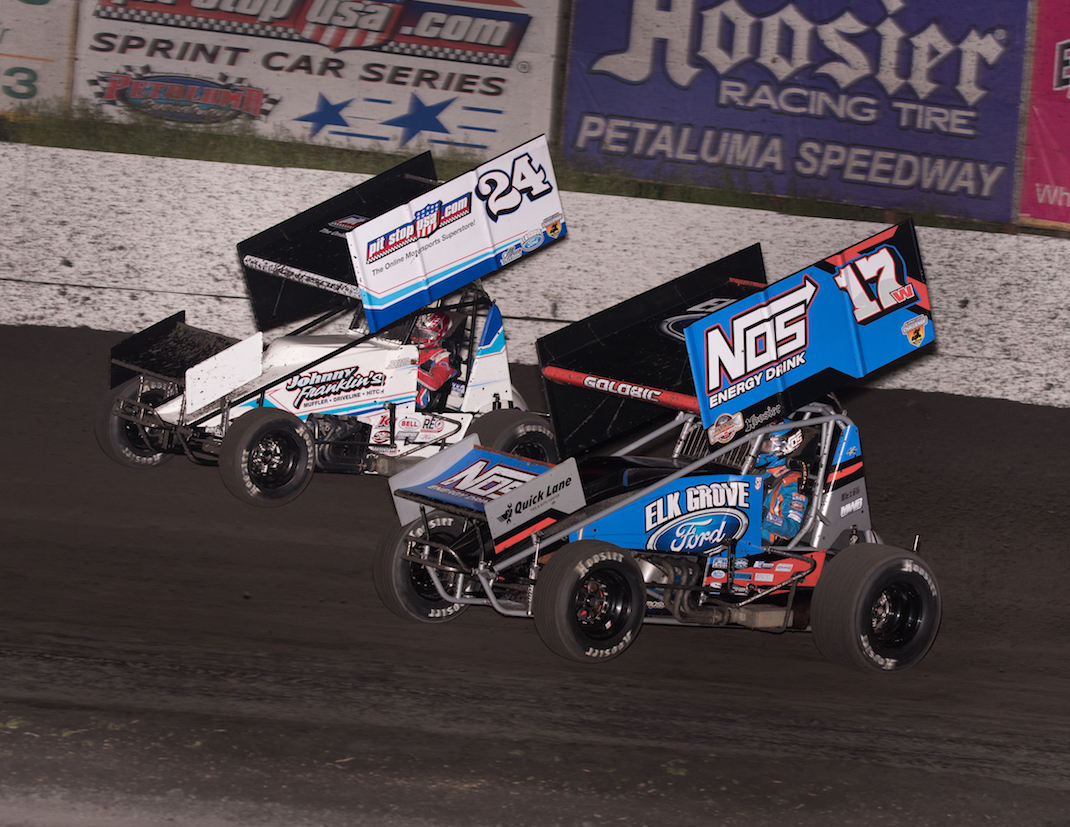 PETALUMA, Calif. — Shane Golobic patiently paced a rocket-fast Geoff Ensign in the early laps and pounced on him in traffic to claim a lead he would keep all the way to the checkered flag, winning the Sprint Car Challenge Tour at Petaluma Speedway Saturday night.

Golobic started the 35-lap race on the pole, but Ensign was the class of the field early on, diving to the bottom groove from fifth on a lap three restart and coming out on top of a three-wide fight for the lead through turn one before motoring away in a car old enough–in race car years—to get a senior citizen discount at the pit gate.

Ensign’s multi-car length lead evaporated as he hit traffic by lap nine on the three-eighths mile oval and Golobic struck his winning move seven laps later, gambling on a outside pass while Ensign was stuck in the bottom groove behind a lapped car.  When Golobic opened that door, Chase Johnson and Caleb Henry followed, dropping Ensign to fourth.

“Geoff was in a tough spot, being in the lead in traffic,” said Golobic.  “If he stayed low, I was going high, but if he moved up on the track, I was going low.”

Ensign said he was trying to be patient and simply waited too long to make a move on the lapped car that held him up. “My car was getting tight and I was waiting for him to make a mistake so I could drive under him,” said Ensign.  “He did make a mistake that let me get by him, but he did it three laps later.”

Golobic bet consistently on the bottom groove during a couple of yellow flag restarts to keep the lead but faced his biggest challenge with five laps to go after a yellow flag for the stalled car of Bradley Terrell.  On the restart, Chase Johnson powered past Golobic through turns one and two and seemed to have the race won before biking the car in turn three, giving Golobic the chance to drive underneath him and to the checkered flag.

Behind them, Ensign, driving a 12-year old car that had been reassembled and painted just the night before and powered by an engine whose age is a mystery, motored past Henry to take the third while Tim Kaeding stormed around the top side of the track to move up six spots in the last five laps to finish fifth.