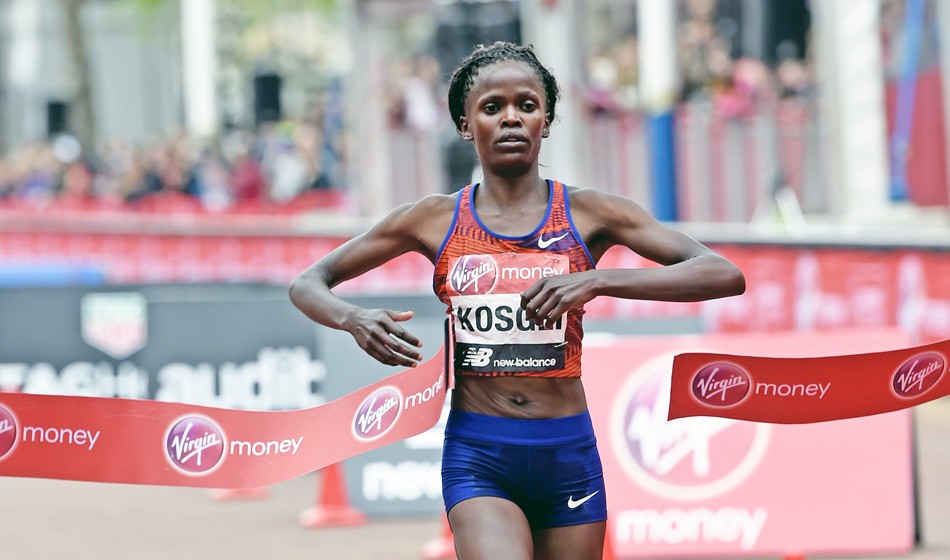 Kenyan dominates on streets of the British capital as Charlotte Purdue excels in 10th to go No.3 on the UK all-time rankings

Brigid Kosgei defeated a stacked field in the women’s race at the Virgin Money London Marathon on Sunday as she surged away from fellow Kenyan Vivian Cheruiyot in the closing stages to clock 2:18:20.

Kosgei finished runner-up to Cheruiyot 12 months ago in London but this time the 25-year-old turned the tables by moving clear during the final 10km to win by almost two minutes.

Defending champion Cheruiyot was level with Kosgei at 20 miles but Kosgei proved too strong as Cheruiyot clocked 2:20:14 to finish second with Rozu Dereje of Ethiopia third in 2:20:51, Gladys Cherono of Kenya fourth in 2:20:52 and three-time London winner Mary Keitany fifth in 2:20:58.

Close behind, Emily Sisson clocked an American record in a women-only race of 2:23:08 in sixth place, while Sinead Diver, the Irish-born Australian runner, held on to clock a fine 2:24:11 after an audacious start that saw the 42-year-old enjoy a half-minute lead over Kosgei and everyone else in the early stages.

Diver’s training partner, Charlotte Purdue, produced the best British performance of the women’s race as well as she stormed home in 2:25:38 to go No.3 on the UK all-time rankings behind Paula Radcliffe and Mara Yamauchi.

Purdue’s fine run saw her finish in 10th overall and the next Briton was Tish Jones – the Belgrave runner clocking 2:31:00 – while Lily Partridge ran 2:31:53 and Hayley Carruthers 2:33:59, before the latter collapsed over the finish line in exhaustion.

Purdue’s preparations saw her split her time between Australia – where she is coached by Nic Bideau – and the Bushy Park area of London. A former European junior cross-country champion, she is now aged 27 and her run on Sunday saw her qualify for the IAAF World Championships in Doha plus the Tokyo Olympics.

“I am really happy to get into the top 10 in a massive PB,” said Purdue. “I couldn’t have asked for a better run really.”

Purdue ran a smartly-paced race but the battle for overall victory was more of an unpredictable, see-saw affair. Kosgei and the main contenders did not go with the pacemakers during the opening miles, for example, with Diver enjoying a clear lead as she passed halfway in 71:22 with Kosgei clocking 71:38 as the eventual winner was content to stay with her main east African rivals at that stage.

By 20 miles, though, Kosgei and Cheruiyot had passed Diver and the contest looked set to be between the same who finished one-two in London in 2018. But Kosgei’s strong surge in the last 10km – where she didn’t even stop to take a drink – ended Cheruiyot’s ambitions and she sped away to a dominant win.

Kosgei said: “The wind was a problem for me today. It was hard for me to get my breath but I’m very happy to have done so well.”

Kosgei also won the Chicago Marathon last autumn in 2:18:35, so she is building up a formidable reputation ahead of the Tokyo Olympics.

“I didn’t really know how far ahead I was, I looked back a couple of times then realised everything was okay. I’m extremely happy in my performance and everything went to plan.”

Cheruiyot said: “I’m happy with a podium finish, I know that coming second means I can keep on improving.”

Like Kosgei, Manuela Schär of Switzerland was a similarly emphatic winner as she took the women’s wheelchair race in 1:44:09.

“Can you believe it I have all of the majors in one year,” said the Swiss athlete. “Plan A was to drive ahead at the three mile downhill mark, which is early, but I know I had to do this in order to put myself in a good position.”

More than five minutes behind, Tatyana McFadden of the United States was runner-up in 1:49:42 followed closely by Madison de Rozario of Australia.

More in this category: « Book competition: Win a copy of ‘Eliud Kipchoge – 2:01:39’ Fast 10,000m for Gudaf Tsegay and huge throw for Maria Andrejczyk – weekly round-up »
back to top