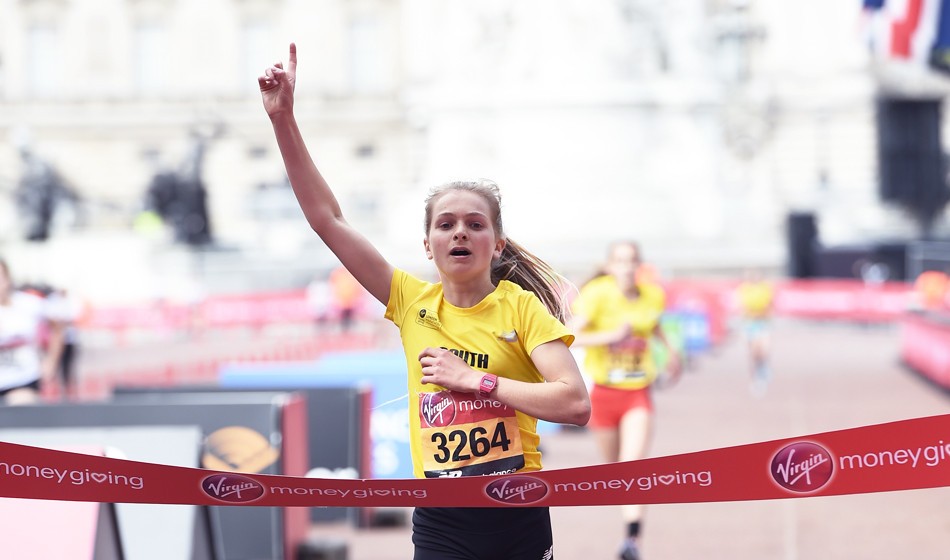 Beatrice Wood, Thomas Archer and Menje Merle proved they were names to watch for the future as they won titles at the Virgin Money Giving Mini London Marathon

Beatrice Wood, the Inter-Counties cross-country champion, translated her success to the road as she took the under-15 girls title in a time of 16:35, just 10 seconds off the course record to take a second victory on the streets of London, Jacob Phillips reports.

Despite her success Wood’s season has not been without challenge following a knee injury which meant she could not run for several weeks.

“I was desperate to win because I won last year,” she said. “I had three weeks off injured over half term because of a knee injury so I’m just happy to be here.

“I’m looking ahead for English Schools competition, which I won last year as well, so I’m just looking to shave as much time as possible.”

Under-15 Thomas Archer, representing Hackney, won both the London Borough Challenge and the British Athletics Road Running Championships as he powered to a surprise victory of just two seconds.

Archer, who finished 164th at the English Schools Cross Country Championships, looks to be improving at a dramatic rate.

Speaking to Athletics Weekly, Archer said: “It was as perfect as I could have expected. I wasn’t expecting much going into it and to come away with the win feels amazing.

“At English schools I struggled and at cross country I’m not that strong so it was good to take the win.

“It’s always in the back of your mind to get to the elite level but I just want to keep being consistent and not overthink it. I’m going to go home now to do some homework and watch the main marathon.”

Athletes represented either their London boroughs or British regions as the two categories of races were merged.

Zien Zhou was the first athlete of the day to cross the finish line on The Mall as he won the boys’ wheelchair race by over a minute, a feat mirrored by Merle Menje, who won the women’s wheelchair race.

Following her victory, Merle said: “I knew that I could do better than last year. My next target is to qualify for the world para athletics junior championships in Switzerland in August.”

Following in the footsteps of the likes of Mo Farah, David Weir and Hannah Cockroft as Mini Marathon winners, those who took to the last three miles of the marathon course will hope to follow in their footsteps to become future Olympians.