Webb Gets No. 7 In New Jersey 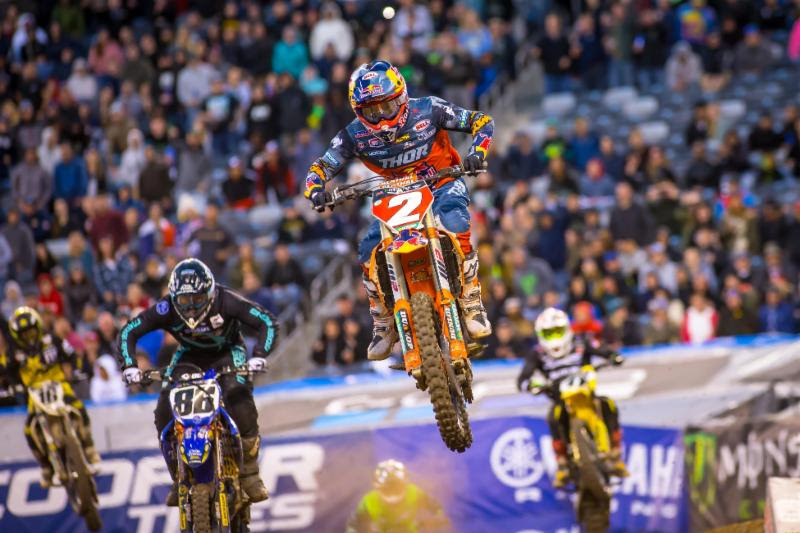 EAST RUTHERFORD, N.J. — It was a night of excitement, drama, and significant championship point moves in the penultimate round of the Monster Energy AMA Supercross, an FIM World Championship at MetLife Stadium.

The 450SX event dropped the gate with four racers still with a mathematical chance at the title. When the checkers flew the crowd of 61,247 cheered for Red Bull KTM’s Cooper Webb, taking his seventh win of the season and stretching his points lead to 23 with one round remaining and only 26 points available to the winner of each round.

In the Eastern Regional 250SX Class, GEICO Honda’s Chase Sexton took his first Monster Energy Supercross win and also the points lead; he holds a nine-point advantage, but the final round is a 250SX East/West Showdown round where nine points can be easily made up or lost.

When the 22 riders funneled through the first turn, Webb emerged with the holeshot with Rockstar Energy Husqvarna’s Zach Osborne and Eli Tomac right behind while Musquin picked himself off the ground after high siding over another rider’s rear wheel. Tomac wasted no time getting around Osborne and the match up was set – number one and two in the points going for a win at the second to last round of the season.

At just under two minutes into the race Tomac got cleanly around Webb, but Webb was not looking to settle for second and the two riders traded the lead and rode several sections side by side during the first five minutes of the 20-minute plus one lap race.

Just before the midway point the leaders looked to have settled into their positions up front; meanwhile Musquin had worked his way up to tenth. Then Tomac got off balance in one of the two whoop sections and crashed softly, handing the lead to Webb.

While Tomac picked his bike up and pursued from fourth, Osborne moved into the lead until a bobble that almost sent him over a berm dropped him back to third. Tomac had the fastest pace and with three and a half minutes and one lap remaining, Tomac got back into second place; but one minute later he repeated his previous mistake and went down in the whoops in what looked like a replay of his first crash.

Webb brought home the victory, his seventh this year – and seventh total after three years contesting the 450SX Class. With more wins than Tomac, and a 23-point lead, Webb can ensure his first Monster Energy 450SX Title with a 20th place (out of 22 riders) at the final round next weekend in Las Vegas.

“It was tough. I was just getting handed [gifts] left and right,” Webb said. “Guys were making mistakes and I felt good. I was starting to battle with Eli for a bit and then tightened up a little. He got a good flow, but he crashed and then Zach was all over me. And I rode good, but man, those guys were a little better. But, I think when they got around me [they found out that] it’s tough to lead out there the way the track is. You’ve got to be so precise, and they made some mistakes and gave me a nice gift… I can’t believe it.”

Osborne was feeling good after proving he has the speed to lead.

“It was an incredible race,” he said. “To lead some laps and pass for the lead and just be in there and get that experience was huge for me. As you said my [late 2018] off-season performance was really, really good and I came into a couple weeks before Christmas and had an injury and it was pretty much worst-case scenario from there. And it’s just been a long, long comeback trail. Our chaplain here at the track, he talked about facing giants this morning and that’s what I feel like I’ve been doing all season. And today I conquered some giants and I’m very blessed to stand here right now.”

In the Eastern Regional 250SX class, Sexton grabbed his first ever Monster Energy Supercross win and took over the points lead in the process.

It was a dramatic day leading up to the Main Event. Sexton was only three points behind Monster Energy/Pro Circuit Kawasaki’s Austin Forkner; Forkner had earned zero points at the previous round due to a torn ACL in his left knee from a practice crash that same day.

Forkner wasn’t at 100% in qualifying in New Jersey, pulling out midway through the second qualifying session but still qualifying with the third fastest lap time. When the gate dropped on the Main Event JGRMX/Yoshimura/Suzuki’s Alex Martin was out in front with the holeshot, with Monster Energy/Pro Circuit Kawasaki’s Martin Davalos, Forkner, and Sexton right behind. Sexton got right around Forkner, but before the pack had completed a lap Forkner aggressively slammed his way back past in a 180-degree bowl turn.

Shortly after, Alex Martin went down, and title contenders Forkner and Sexton looked to be closing in on race leader Davalos. Two and a half minutes into the Main Event, Forkner landed hard on a flat landing and aggravated his knee. He rolled off the track in obvious pain, out of the race for a DNF and just one championship point. A little over six minutes into the race, Sexton took the lead away from Davalos and stayed composed on the challenging track to take the win, and with it a nine-point lead in the championship chase with one round remaining. Sexton’s closest competitor, Monster Energy/Star Racing/Yamaha’s Justin Cooper, finished third. Cooper’s teammate Mitchell Oldenburg, split the title contenders for his first podium of 2019. Anything, especially making up big point gaps, can happen at the final round next weekend in Las Vegas where both the Eastern Regional and Western Regional 250SX Classes compete in one combined Main Event for single-event points payout.

More in this category: « East Carolina Backs Weatherman & Ware At Bristol Jake O’Neil Sets Sail At Longdale »
back to top