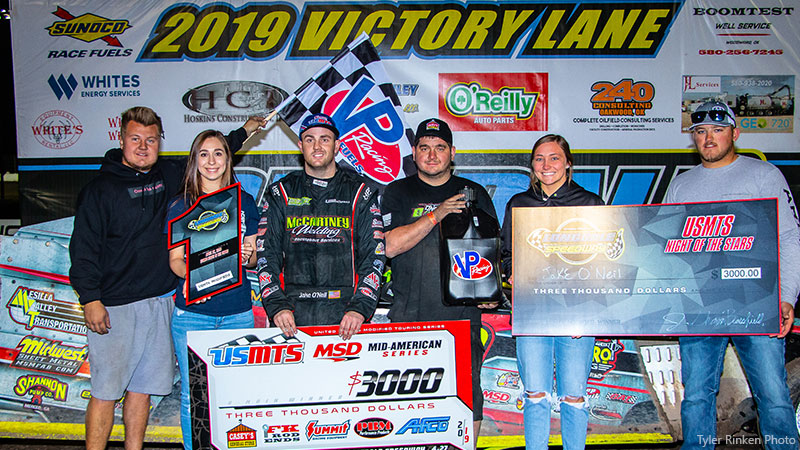 LONGDALE, Okla. – After missing most of April while he recovered from medical issues, Jake O’Neil has steadily improved both physically and inside the cockpit of his LG2 chassis by Jimmy Owens.

On Thursday night he returned to USMTS action for the first time since King of America IX in March and brought home a fifth-place finish. Friday night he improved to third and Saturday he made the climb to the top of the mountain by winning at Longdale Speedway.

O’Neil started on the outside of the front row for the 35-lap main event, but it was back-to-back Sybesma Graphics Pole Award winner Dereck Ramirez who got the jump at the drop of the green flag with Ryan Gustin and R.C. Whitwell following Ramirez while O’Neil slipped to fourth on the opening lap.

Still looking for his first USMTS victory of the year, Gustin pressured Ramirez for the first eight laps before Whitwell got by to claim the second spot. Whitwell nosed ahead to lead lap 12 but Ramirez powered back to the front one lap later.

O’Neil was eventually able to get around Gustin and Whitwell, and then wrestled the lead away from Ramirez with 27 laps in the books while Gustin coasted to the pit area with mechanical troubles for a second straight night.

For the final eight laps around the half-mile clay oval, O’Neil left no doubt as he pulled away to a six-car-length triumph at the finish line with Ramirez following in the runner-up spot. O’Neil’s fourth USMTS win was worth $3,000.

Meanwhile, USMTS national points leader Rodney Sanders worked his way to the third spot after starting 20th due to switching to a back-up car after his heat race, which he won. He would have started sixth in the feature race if he had driven the same car he qualified with.

Whitwell held on for fourth ahead of 14th-starting Tyler Wolff.

More in this category: « East Carolina Backs Weatherman & Ware At Bristol Garrett Hall Is Maine PASS Victor »
back to top