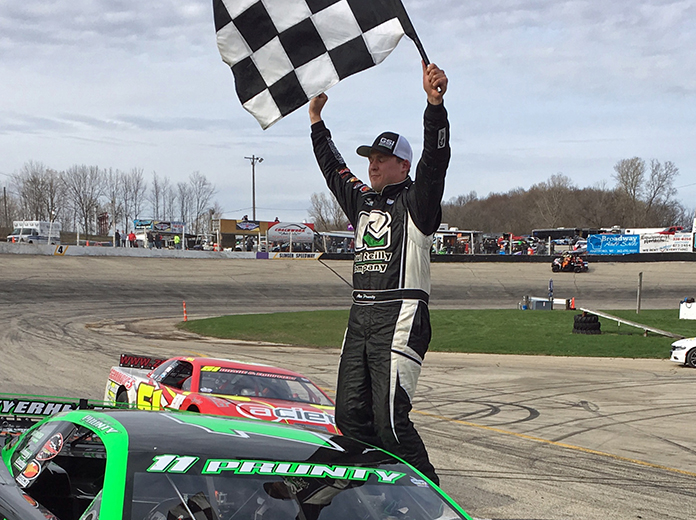 SLINGER, Wis. – Even after winning a track championship and accomplishing a feat done only once before in 70-plus years of racing at Slinger Super Speedway, Alex Prunty still thinks he has something to prove.

That’s why he’s back to defend his super late model title and his defense got off to a good start Sunday.

In victory lane, Alex Prunty said it was a long, but busy offseason.

To him, some critics still weren’t impressed.

“Last year was a year where a lot of people looked at like we lucked into it,” he said. “This year, it’s kind of wanting to prove and verify yourself. A lot of the great champions have won two times.”

Would that be enough? Prunty believes no, even if he were to win three in a row. That’s why he continues to come to the track and compete, even after accomplishing the one feat he wanted to do since he was a 6 years old.

“This is our 11th year here and I’m still trying to prove myself,” Prunty said.

“It was a hell of a battle,” Nottestad said, who also revealed he’ll be doing a full season at Slinger. “It’s a good start to the year.”

– Sunday’s festivities kicked off a season-long celebration at Slinger. This year, the village is celebrating 150 years since its founding, originally known as Schlesingerville. On Sunday, in addition to the twin 50-lap features, there was a 50-lap limited late model feature. It was the first time since 2006 the Slinger opener had a pair of features for the super late model division. Al Schill and Dennis Prunty won those races.

– Slinger’s 72nd season of racing got off to a quick start with Jerry Mueller breaking the track record in the limited late models (11.929 seconds). Mueller said it was his first fast time in 18 years.

– As a celebration of the past, more than 70 current and former track champions were united for a group photo. Among the champions on hand were Willie Goeden, Al Schill Sr., Rich Bickle Jr., Mark Ritger, Lowell Bennett and Johnny Ziegler.

– The new was also celebrated Sunday with the Wisconsin debut of Five Star RaceCar Bodies’ new late model body. It had already debuted on the East Coast, as well as in Arizona and Washington.

“We were exceptionally pleased with how they looked on the track,” said Steve Einhaus, sales manager for Five Star.

The new body was the first redesign by the company in 15 years. The noticeable difference for the fans was the revamped nose, which includes a clear distinction between Chevrolet, Ford and Toyota.

Alex Prunty is one of those drivers with the new body and he said he didn’t notice too many differences one way or the other as far as performance on the track. In the first 50-lapper, he said he struggled with some of the handling, but made some adjustments ahead of the next 50-lapper and was strong from the onset of the feature.

Dennis Prunty won the other feature with an older body style.

More in this category: « East Carolina Backs Weatherman & Ware At Bristol Rain Stops World Of Outlaws Again »
back to top