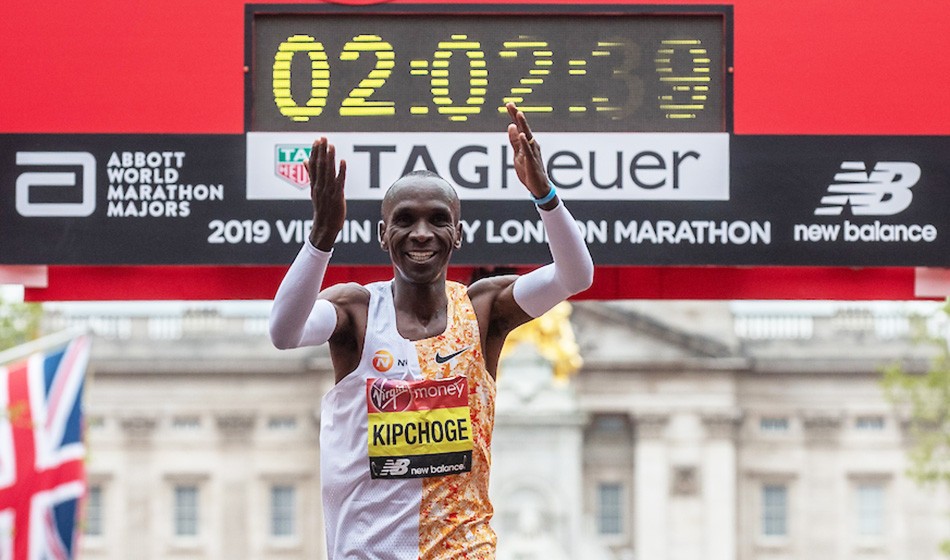 “It is better to be humble and succeed for a long time,” says the world record-holder, whose winning celebrations were confined to the finish line

As he crossed the finish line, arms aloft and with a big smile spread across his face, it was clear how much a fourth Virgin Money London Marathon victory meant to Eliud Kipchoge.

He was the huge favourite going into the race, but never takes anything for granted.

The Kenyan’s time of 2:02:37 improved his own London course record. It was the second quickest ever mark on a record-eligible course, after his own world record of 2:01:39 from Berlin. He won by 18 seconds, leading Ethiopia’s Mosinet Geremew and Mule Wasihun both inside 2:03:30, to take his marathon winning streak to an impressive 10 races.

Such a performance must demand some lavish celebrations? Of course, the answer is no. As has come to be expected from this marathon master, his post-race ritual proved just as humble as his low-key lifestyle.

“I am a man who doesn’t like celebrations,” said the 34-year-old.

“I think celebrations ended yesterday at the finish line.

“I have a great team with my sponsors, management and coaches. I will get together and have tea and dinner with them.

“It’s good to go back on a low profile and just chill, stay with the family, plan for the next season and stay focused.”

How will @EliudKipchoge celebrate after his fourth @LondonMarathon win? “I think celebrations ended yesterday at the finish line. It’s good to go back on a low profile and just chill, stay with the family, plan for the next season and stay focused.” #LondonMarathon pic.twitter.com/VAMupmVRjO

Given all he has achieved, just how does he maintain that motivation?

“I love the sport,” he said. “That’s what drives me and that’s what acts as my ignition key.”

After all his success, how does @EliudKipchoge remain motivated? “I love the sport. That’s what drives me and that’s what acts as my ignition key.” #LondonMarathon pic.twitter.com/nB3IyMWalW

Kipchoge has previously spoken of his intention to defend his Olympic marathon title in Tokyo next year and although reluctant to voice specific plans for further into the future, he has confirmed that he would like to complete the World Marathon Majors series.

“I trust that before I see the sport out, I will run all six major marathons,” said the three-time Berlin champion.

With 2014 Chicago victory added to his London wins and Berlin titles, Kipchoge would need to run New York, Boston and Tokyo to complete the six-race series.

As for other global goals he must be targeting a world marathon title, perhaps in Doha later this year, to go with his Olympic gold from Rio?