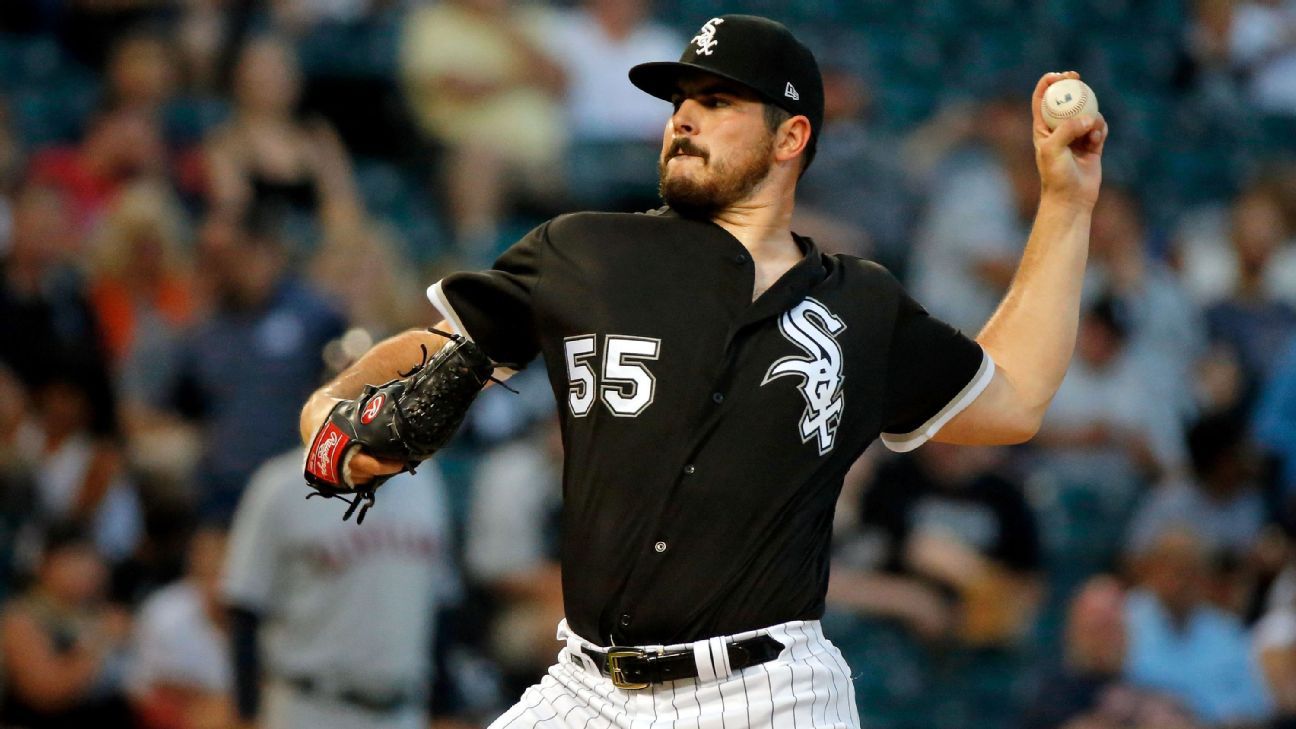 CHICAGO -- The injury woes for Chicago White Sox left-hander Carlos Rodon worsened Thursday with the news that he was being placed on the injured list because of inflammation in the elbow of his pitching arm.

Rodon struggled in his two most recent outings for Chicago, saying he had a difficult time keeping his arm loose. He lasted just three innings during a start against Detroit, allowing nine runs and eight hits on April 26. Then in the first game of a doubleheader against Baltimore on Wednesday, Rodon was pulled during the fourth after giving up three runs in the frame.

It has been a seasonlong issue for Rodon, but during the last inning against the Orioles, the problem came to a head.

"It's just been tight, really, the whole season," Rodon said Thursday. "But nothing like yesterday. Yesterday kind of got me a little bit. It didn't really loosen up like it normally does."

White Sox general manager Rick Hahn said that after initial examinations by the club's medical staff, it was determined that Rodon has an edema in his pitching arm.

"Upon examination, [Rodon] revealed some tenderness over the forearm," Hahn said. "We ordered some studies on them that revealed some edema in the flexor mass, which is essentially is some blood in the muscle. That's obviously not a good thing, and trying to figure out the cause of that is what ultimately will dictate the course of action."

Rodon will undergo further diagnostic tests in an attempt to find what's causing the edema and the resultant tightness in his forearm. However, Hahn expects his hurler to be out for a while and says that he can't rule out the possibility of Tommy John surgery.

"At this point, I can just say that everything is on the table," Hahn said. "I can't rule anything out. I don't want to speak for any doctors. We've got to get everybody involved and understand exactly what we're dealing with."

The news was particularly unwelcoming for a White Sox staff that has struggled to string together quality innings from its starting rotation. It's also a position group that has seen a rash of injuries, such as the elbow injuries suffered by top prospects Michael Kopech and Dane Dunning, and a recent IL stint for righty Lucas Giolito because of a hamstring strain.

"Look, 'punch in the gut' is one of many phrases that has been thrown around here over the last few hours," Hahn said. "It's frustrating. It's disappointing. At the same time, it's the by-product of having a significant number of potentially impactful guys."

Giolito was activated Thursday to fill Rodon's spot on the active roster. He was slated to start Thursday's game against the Boston Red Sox. Hahn added that righty Dylan Covey will assume Rodon's spot in the rotation for the near term and emphasized that the timeline for top prospect Dylan Cease would not be affected by injury-related shortages at the big-league level.

Rodon was the third pick of the 2014 draft, but his White Sox career has been plagued by injuries and inconsistency. He spent time on the injured list in 2016 because of a sprained wrist. In 2017, he missed nearly three months because of bursitis in his left bicep. He returned that season but ended up back on the injured list with shoulder inflammation, an issue serious enough to eventually require surgery that kept him from the active roster for nine months.

Despite the continuous setbacks, Rodon seems to take it all as a hazard of his very unique occupation.

"It's super frustrating," Rodon said. "It's something that's out of anyone's control. It's no one's fault. Things like this happen. Second time something like this happens, there is not much you can do about it. You've just got to roll with the punches."