'Nobody's slightly worried about him': How Vlad Jr. has won 'em over already 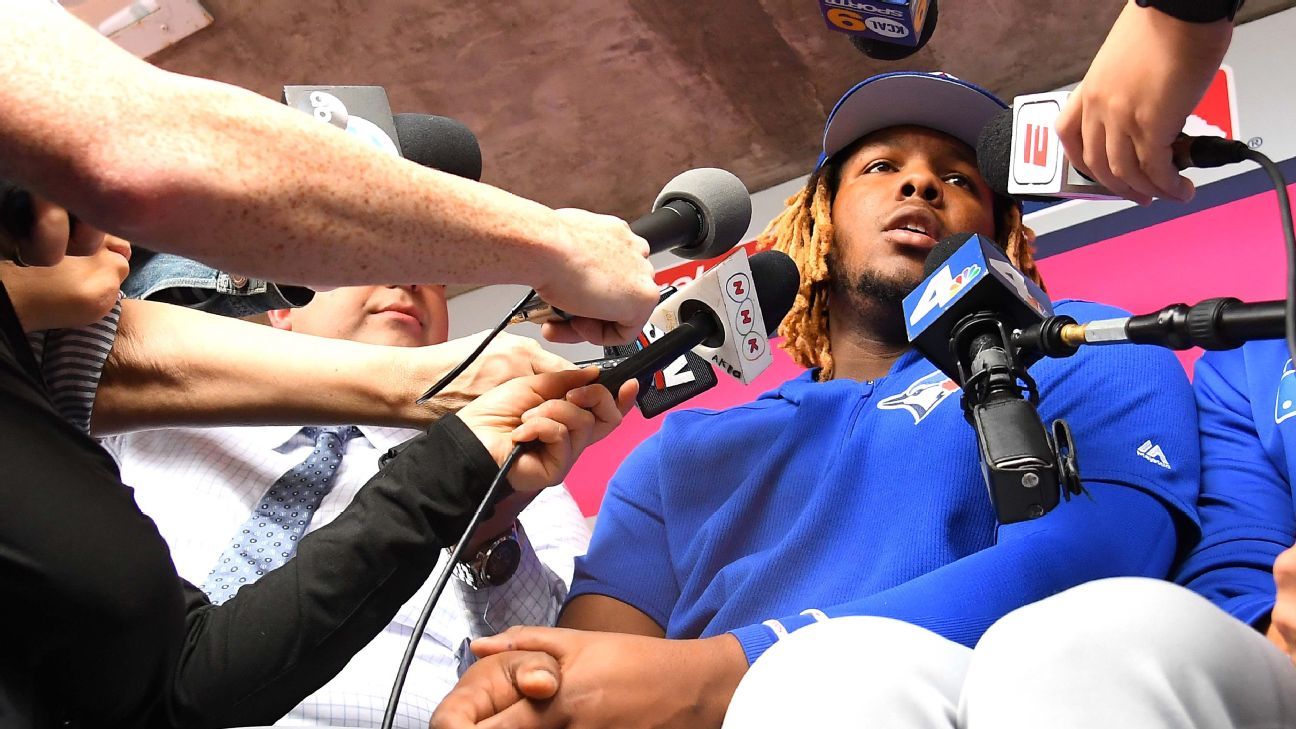 ANAHEIM, Calif. -- Vladimir Guerrero Jr. made it down the dugout steps, darted toward the bench, raised his helmet overhead and stopped himself just short of slamming it on the wooden platform, choosing instead to internalize his frustration. This was the fourth inning of the first game of a highly anticipated series at Angel Stadium, the penultimate start of Guerrero's first week as a celebrated major leaguer. The 20-year-old third baseman had pulled a slider that hung over the plate and drifted away, hitting a harmless one-hopper that left two men in scoring position.

Guerrero's first game, which occurred seven days ago, might have marked the sport's most anticipated debut since that of Bryce Harper. But he has since recorded only three hits in 18 at-bats, just one of them for extra bases.

He made two dazzling defensive plays -- one to his left, the other to his right -- but also booted two grounders. He was robbed of a double by Chad Pinder in Toronto and robbed of a home run by the marine layer in Southern California. He helped set up a walk-off victory in his first game but has stranded 13 baserunners along the way. He displayed the strong arm that conjures memories of his father, but not much of the plate discipline that distinguishes him from the elder Vladimir Guerrero.

On Wednesday, Vlad Jr. tried hitting without batting gloves -- just like Dad -- in hopes of finding something to get him going.

On Thursday, before a red-eye flight bound for Texas, he sat.

"Nobody's slightly worried about him, to be honest," Toronto Blue Jays starting pitcher Marcus Stroman said of the younger Guerrero, stating what should be blatantly obvious given the sample size. "Everyone knows he's going to figure it out."

Upon his arrival in Anaheim on Tuesday, Guerrero was asked about the other player who now wears 27 for the Angels. He furrowed his brows, confused as to why the question had even been asked.

"It's Mike Trout," Guerrero said. "Who doesn't know that?"

The No. 27 never meant much of anything to Trout. But it hung at his locker when he was called up in July 2011, two years after the elder Guerrero wore that number during his final season with the Los Angeles Angels, and Trout never thought to change it.

Trout knew all about the Blue Jays' No. 27 before Guerrero Jr. even arrived in the majors. He knew about the viral videos of his batting-practice sessions, about the exploits of his Hall of Fame father, about the promise of similar accolades, and so, shortly after the Blue Jays landed Guerrero with a $3.9 million signing bonus in 2015, Trout signed up for alerts of his progress through the minor leagues.

"Every time an update came up, it was a double or a homer," Trout said. "He wasn't getting out."

Albert Pujols recalled meeting an 8-year-old Guerrero at the 2007 All-Star Game in San Francisco, and marveled at how quickly the time had passed. Five years later, after Pujols joined the Angels, Vlad Sr. brought his then-13-year-old son onto the field for batting practice.

"He was strong, man," Pujols said. "Swung just like his dad."

Jose Mota, the son of decorated Los Angeles Dodgers outfielder Manny Mota, has spent the past 18 years as a broadcaster for the Angels. Mota and the elder Guerrero built a strong relationship in their six seasons together from 2004 to 2009, so much so that Mota served as an interpreter for his induction speech in Cooperstown, New York, last summer.

Mota remembers a 5-year-old Vlad Jr. dragging a 34-inch, 32-ounce bat through the dugout. He remembers the beads of sweat on his face while he spent his afternoons chasing after batting practice fly balls. He remembers watching Vlad Jr. as a teenager and beginning to see his father.

"Just a natural ability to hit," Mota said, "and being fearless."

Guerrero deserved to be called up last September, but the Blue Jays didn't reward him for his dominance. He was good enough to be on the team's Opening Day roster this season, but an oblique injury set him back, giving the organization an easy excuse to delay his free agency by an extra season.

Guerrero's bat speed, power and plate discipline are elite enough to draw reasonable comparisons to Manny Ramirez and Miguel Cabrera. His stocky frame might push him to first base, an outfield corner or perhaps even designated hitter in the near future. But his arm is a weapon, even if it isn't at the level of his father's. In listing Guerrero's key traits, one scout noted his "maturity" and "how he enjoyed playing" and "how he handled everything around him," an encouraging sign considering the two main questions surrounding Vlad Jr.

1. Can he rise above the pressure that comes with following in a famous father's footsteps?

Blue Jays manager Charlie Montoyo doesn't share that concern. He noted the suffocating attention Guerrero attracted during spring training and over this past weekend in Toronto, and how he exhibited unbridled joy throughout it all.

2. Does Guerrero possess the work ethic necessary for sustained success at this level?

That was never an issue with Vlad Sr. But he grew up poor, one of five children who lived in a shack with no electricity or running water in a rural area of the Dominican Republic. Vlad Jr., on the other hand, lived a privileged life because of the way his father overcame struggle.

But Mota will tell you it never sapped his drive. He brought up the example Vlad Sr. consistently set, both through his diligence and his generosity. And he brought up Vlad Jr.'s support system, most notably his grandmother, Doña Altagracia, who roomed with him in the minor leagues and still cooks for some of his teammates.

"She does not put up with anything," Mota said. "She keeps him humble."

Blue Jays first baseman Justin Smoak was a rookie with the Texas Rangers in 2010, when Guerrero Sr. was winding down his career as a DH. Smoak's lasting image of Vlad Sr. is of him sitting in the dugout, in full uniform, waiting for the game more than 30 minutes before the first pitch, even though he wasn't playing the field. He was reintroduced to Vlad Jr. during spring training and became impressed by his measured approach during batting practice, a setting when most young players can't help but swing for the fences.

"He's been in big league clubhouses basically his whole life," Smoak said. "This setting doesn't scare him; the stage isn't too big. He's very comfortable in his own skin. He's a lot like his dad in the fact that he's quiet, but it's like a quiet confidence. He doesn't have to tell you every day how good he is. He knows how good he is. He's going to go out there and show you on the field, and I feel like it's something that his dad definitely did as well."

Montoyo dismissed the notion that Guerrero might benefit from settling into the normal, monotonous grind of a baseball season -- because it will never be normal or monotonous.

Not for the son of such an iconic player.

Not for someone who might someday be just as good.

"It's tough," Trout said of Guerrero's quest to live up to the hype, "but seeing him, coming up through the minors, I think he'll be all right. He's got all the tools."