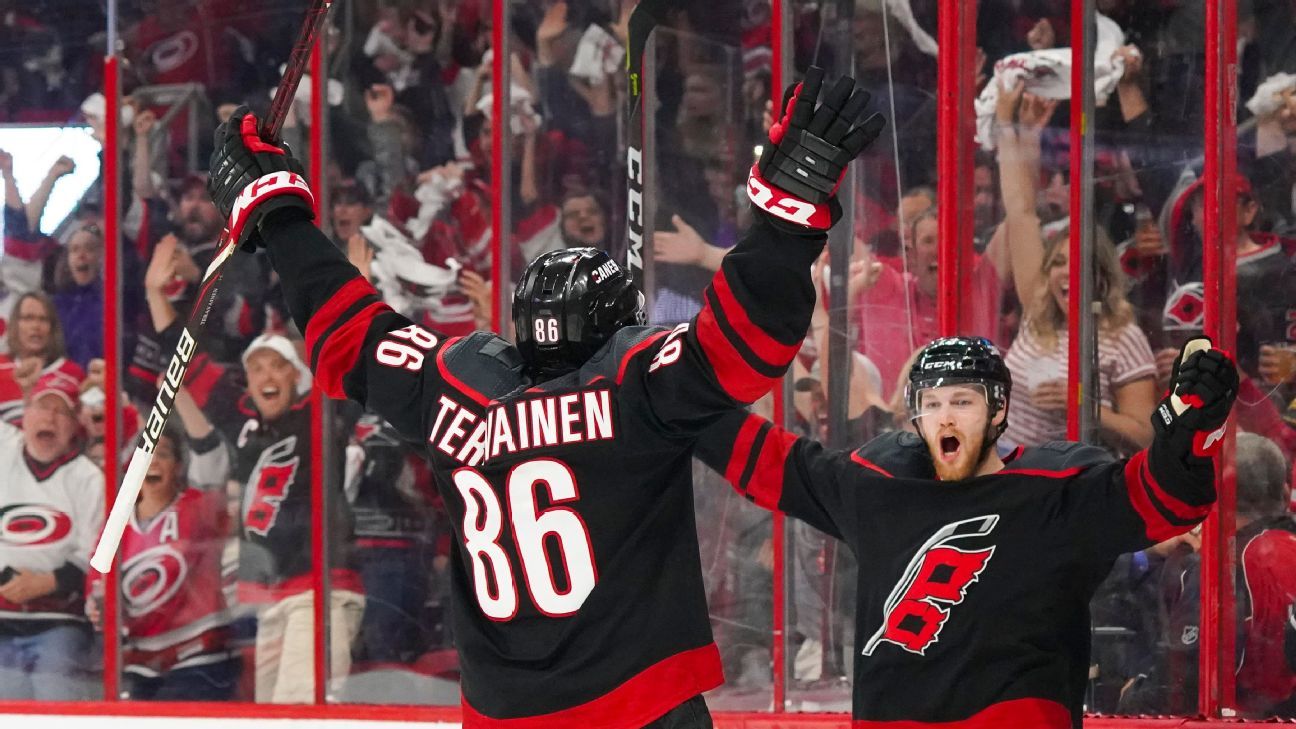 Better believe in the "Bunch of Jerks." The Carolina Hurricanes punched their ticket to the Eastern Conference final, completing a sweep of the New York Islanders on Friday night. Meanwhile, the Dallas Stars pushed the St. Louis Blues to the brink of elimination.

Game 4: Carolina Hurricanes 5, New York Islanders 2 (Hurricanes win the series, 4-0). The Hurricanes don't always make the postseason, but when they do, they go big. (They've made the playoffs four times since 2002, all four times they've reached the Eastern Conference final). Journeyman goaltender Curtis McElhinney (age 35!) is a win or two away from becoming the stuff of legend this postseason. With another offensive outburst, the Canes are trending toward wagon status, while the Islanders had a hard time mustering any offense, yet again, knowing they'd have to win four straight to stay alive.

Game 5: Dallas Stars 2, St. Louis Blues 1 (Stars lead the series, 3-2). A timely (and pretty) goal from Jason Spezza got things going for the Stars early in the first, as he buried a one-time feed from behind-the-net Tyler Seguin. Esa Lindell also scored, and that was all the offense Dallas needed to take hold of this game, and the series. It's now win or go home time for St. Louis, as they hit the road for Game 6. The Blues need to improve their power play, which went 0-for-4 on Friday and is now 2-for-16 in the series. Their third power play was particularly brutal, and the the crowd in St. Louis let them know it with some boos.

Jason Spezza opens the game with a quick goal and Esa Lindell adds another in the 2nd period as the Stars top the Blues 2-1 for a 3-2 series lead.

What a start for Bishop in front of his hometown crowd. He shoveled away 38 saves to record the win.

His goal to open the second period -- which proved to be the game-winner -- began the surge. The Finn finished with a goal and assist.

A journeyman goaltender gets his moment; he was solid to earn the win for the home crowd and had a few beauty saves.

THIS ONE'S GONNA BE ON A LOOP pic.twitter.com/vVCL01F4n3

Roope Hintz is having quite the playoff run. This backcheck to breakup a shorthanded chance highlights the Finn's speed.

Hintz with the �� skates on the backcheck on a Pietrangelo shorthanded chance. pic.twitter.com/32EJ4HRZ0h

Robin Lehner wasn't the dud here. His team broke down in front of him and that's why the Islanders lost. The dud is how his spectacular season ended. What's worse: after Lehner was pulled in the second period, he had to watch the game, isolated, ways away from his team, thanks to cruel arena construction.

The goalie, however, shows unrelenting class:

Not the ending we wanted. I'm so proud of this group. This organization has a bright future! From the bottom of my heart me and my family want to thank the islanders fans for the great support. Never gonna forget this year of my life. Good luck too Carolina. Great team.

Welcome news for the Boston Bruins: the stars are OK. After combining for just one goal in the first three games, Patrice Bergeron, Brad Marchand and David Pastrnak helped account for thee of the goals in Game 4. And after letting Sergei Bobrovsky hog the headlines early, Tuukka Rask looked terrific in Game 4 (saving 39 of 40 shots, though it probably should have been a shutout, given that the Jackets' lone goal came after the puck hit the netting). The Blue Jackets like how they played in Game 4 (minus taking so many penalties) and probably won't change much for Game 5; Columbus believes this is going to be a series decided by special teams.

The Nathan MacKinnon lovefest will continue (and rightfully so). MacKinnon is the most dominant star remaining in these playoffs; he and Mikko Rantanen are a scary good duo right now, combining for 11 goals and 26 points in nine games. Tyson Barrie is also having a monster playoffs. Meanwhile, don't be surprised if you see some new looks from the Sharks' power play; they need to get something going there (1-for-9 so far this series). One obvious area for improvement: winning the possession battle with the man advantage. The Sharks haven't won nearly enough power-play faceoffs.

What do we have here? A rare case of an NHL player ... trolling an opponent?

The kid knows how to stay in the zone.