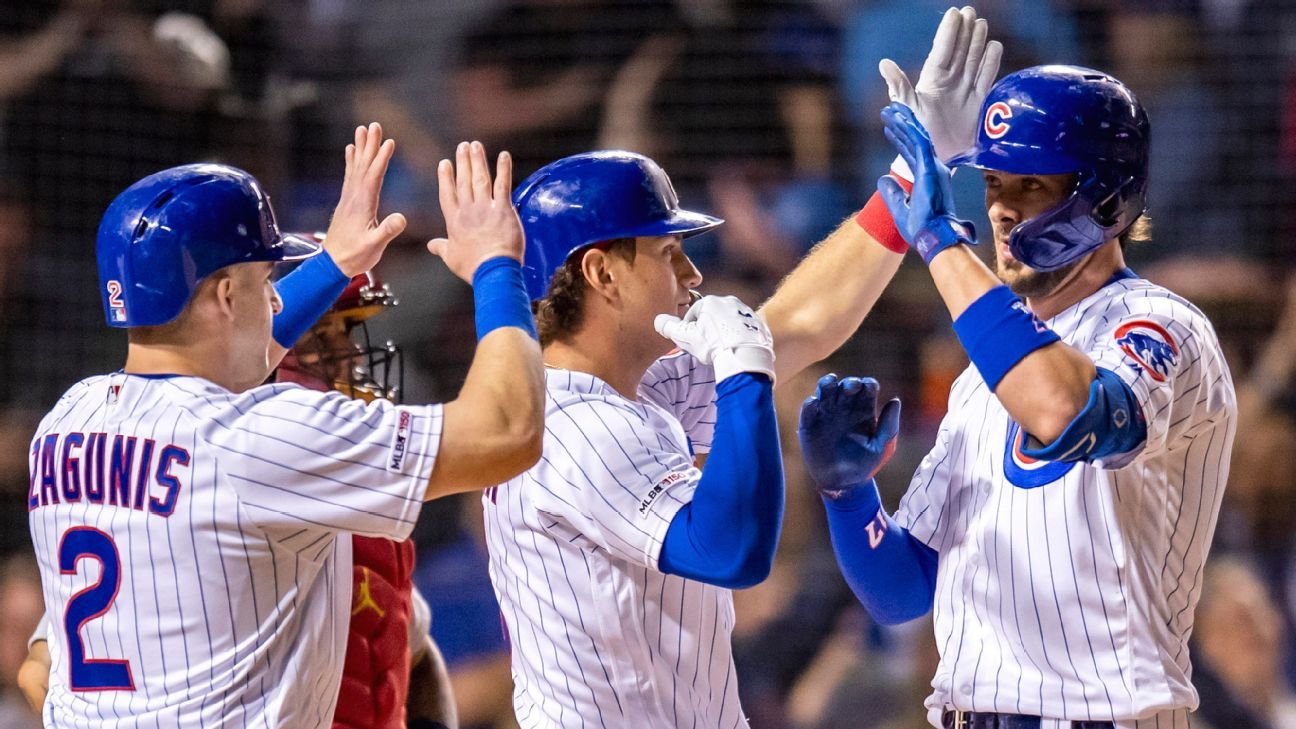 CHICAGO -- If there is such a thing as a baseball Hollywood script in early May, then the Chicago Cubs have the plot line down: Get off to a bad start -- inviting doubters from all over the game -- then turn things around to the tune of a seven-game winning streak culminating in a three-game sweep of the first-place team.

In pulling that off, the Cubs switched places with the St. Louis Cardinals, and they find themselves on top of the National League Central less than one month after a season-opening 2-7 road trip. The turnaround has been as dramatic as it reads.

"I didn't really anticipate this," manager Joe Maddon said before the Cubs beat the Cardinals 13-5 on Sunday. "I talked about [picking up] one game a week. That's normally how you do it. You don't normally have this quick rebound."

The Cubs just about doubled what Maddon thought was possible, picking up six games in the standings since April 7. How did they do it? This is where Hollywood would want to alter the script. There was no magic formula -- just good, solid baseball.

"Our pitchers have been great," Kris Bryant said. "Our at-bats have been great. Defense. Everything has really been clicking for us. This is the type of baseball that's super fun to be a part of."

Bryant provides a good example of what a stretch of a few bad games means over the course of a long season, for both an individual player and a team. It means little, especially when there's a track record involved, as there is for Bryant and the Cubs. Bryant put the icing on the cake on Sunday, when he hit an eighth-inning grand slam as part of an offensive attack that scored in five of eight innings and saw each starting position player collect at least one hit.

It would be hard to find a player more satisfied with how things are going than Bryant. He started the season slowly, enduring way too much early criticism, but has turned it on of late. Whether the results show or not -- they're starting to -- Bryant has been scorching the ball all over the field.

"I've been feeling really good at the plate," he said. "I feel like I've been hitting the ball so hard."

Bryant credits Maddon with watching old film of his at-bats and noticing a "quieter" hitter, especially during his MVP year in 2016.

"My philosophy of hitting is not to have much movement," Bryant said. "It shows in my swing. It's kind of what I got back to. It's nice to hit the ball hard all over the field."

It's also nice when the pitching can match the hitting. That wasn't the case the first week or so of the season, when the Cubs were walking way too many hitters. That changed after the opening road trip, and if anything has keyed the turnaround, it's a staff that is on fire right now. Since April 8, the Cubs' team ERA is 2.48. The next best in baseball in that time -- the Arizona Diamondbacks -- have a 3.40 mark. Let that sink in. Since the second week of the season, the Cubs are giving up one run fewer per game than the next best pitching staff.

"It starts with the starting pitching," Maddon said. "They've permitted us to get on this roll."

Jose Quintana is the definition of a starting pitcher on a roll. The Cubs have won his past five starts while he has compiled a 1.93 ERA, walking a total of five batters. He's just one of a group of pitchers who were maligned early in the season but have helped the team to the top of the standings.

Just like that, the Cubs have their swagger back, a swagger that comes with having the most regular-season wins in baseball over the past four years and earning four trips to the postseason in that time.

"I'd like to believe we have this inner swagger, always," Maddon said. "We're playing the game with a lot of energy. The pitching has set the tone."

Bryant shook his head when asked if he doubted the team even just a little when it started the season 1-6, 2-7 and 3-8.

"That was just kind of a weird start to the year," he said. "We all knew we had talent in here."

That talent has shown up in a big way. Even before the Sunday night win, the Cubs were the first team in 24 seasons to start the year at least five games under .500 and reach six games over by their 30th contest. A 17-5 stretch has put them seven games over .500 and in first place.

"We really turned it around since then," Bryant said. "Any time you can take three from the team that's in first, of course you're going to feel good about it."

As for that swagger Maddon was taking about, he doesn't care how it's described. He's feeling the same thing a huge Sunday night crowd was feeling as it chanted "sweep, sweep, sweep" in the closing moments of the May blockbuster movie entitled "Cubs take over first place."