'A physical game of chess' - who will win Champions Cup final? 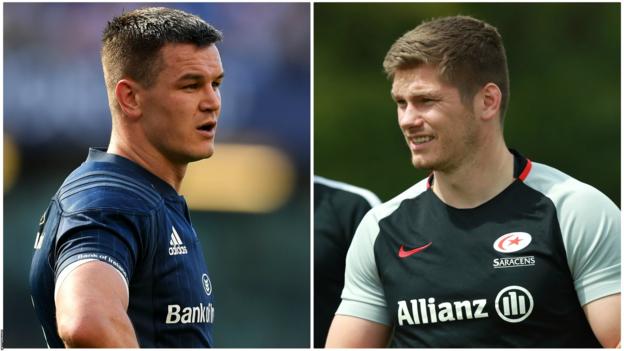 Europe's two best sides will face each other this Saturday in a match former England winger Ugo Monye expects to be "a physical game of chess".

Defending champions Leinster aim to become the first side in history to win the Champions Cup five times, while Saracens could claim their third title in four years.

With more than 20 internationals and 10 British and Irish Lions between the two sides, it will be a closely-fought final in Newcastle.

But how can you possibly separate Leinster and Saracens? Monye and BBC rugby union correspondent Chris Jones explain where the game could be won and lost.

Saracens are unbeaten in the Champions Cup this season and have already secured their place in the Premiership semi-final. Meanwhile Leinster have only lost one European game in the past two seasons and could do the 'double-double' - winning back-to-back Pro14 and Champions Cup titles.

Ugo Monye: If Saracens play to the peak of their power and Leinster do, who wins? I've not a clue. If they don't take their opportunities - and they won't get many - they don't have a chance. In a game with two evenly-matched teams, you need to find a spark somewhere. You need someone who can do something out of the ordinary.

Stylistically, you have two teams that play in an identical way. You've got to have a better work ethic. These two teams pride themselves on that.

Chris Jones: For every Maro Itoje, there's a James Ryan. For every Mako Vunipola, there's a Tadhg Furlong. There's Owen Farrell and Johnny Sexton. In a tight game, that 'X factor' finishing ability is going to be huge.

Saracens director of rugby Mark McCall has said this week the game will be decided by "small moments" which, in his words, "might be a magical moment". This is where the back-three players come in, whether it is Jordan Larmour and James Lowe for Leinster, or Liam Williams and Alex Goode for Sarries.

England captain Owen Farrell is Saracens' fly-half while World Rugby player of the year Johnny Sexton is Leinster's number 10. England came out on top when the pair went head-to-head in the Six Nations earlier this year and Farrell is the top points scorer in the Champions Cup this season with 79. But Sexton, who already has four Champions Cup titles to his name, is the all-time leading points scorer in finals with 63.

Ugo Monye: It could come down to something as simple as Sexton and Farrell's tactical kicking. It's not as obvious as Larmour beating 10 players to score a wonder try. Something like that, territory kicking or kicking for goal could make all the difference because these two teams are so well-matched.

The amount of kick pressure and territory pressure both teams put on you, you have to have a good exit strategy. Whether it's kicking to compete or kicking for territory - you have to get that right with the kick-chase.

Chris Jones: Both teams have a strong kicking game, which has been instrumental in their success over the past few years. While Leinster's kicking game may be a bit more varied than Saracens', Farrell showed in the semi-final he likes to mix up his kicking in the Sexton mould. Picking the right moments to kick in attack will be crucial.

But when it comes to the boot, scrum-half Ben Spencer is the key man for Sarries. A left-footer, he looks a clone of Richard Wigglesworth - who has been the premier box-kicker in Europe over the past few years - and is beginning to play like him as well.

Expect Spencer to do the bulk of the clearing to touch for the men in black, but he will also bombard Leinster with box-kicks, which the chasers will look to re-gather in an attempt to capitalise on a broken defence.

'The tsunami effect of runner after runner'

Saracens and Leinster are tied for the most tries scored in the competition with 32 each. But a lot of both sides' success comes from their powerful forwards and the pressure they put on their opponents.

Ugo Monye: Both teams' ruck efficiency is sublime. It's been more than 90% right throughout this competition and that's where they get their yards. They'll go one, two, three phases over the gainline, to the backs with lovely shape then they sting you out wide.

For Saracens, Brad Barritt gets over the gainline, all of a sudden you get a quicker ruck speed and then second phase you've got someone like Billy Vunipola coming round the corner. It starts at source, if you don't get that first ruck right you're chasing your tail a bit. Then you get this tsunami effect of runner after runner. It applies to both teams.

Chris Jones: Few teams keep the ball as ruthlessly and accurately as Leinster - with their frightening ruck efficiency at the heart of their Champions Cup success last year. Both teams have an armoury of dynamic ball carriers, so whoever dominates the gainline should win the match.

But it is more than that - both sides possess outstanding distributors among their forwards, who can occupy defences before releasing others into space. Tadhg Furlong for Leinster and Jamie George and Mako Vunipola for Saracens are as good as their All Black front-row counterparts when it comes to handling skills.

But we are also looking at the two best defences in Europe. Could those defences nullify each other, or will the quality of attack prevail?

It's going to be a great final.