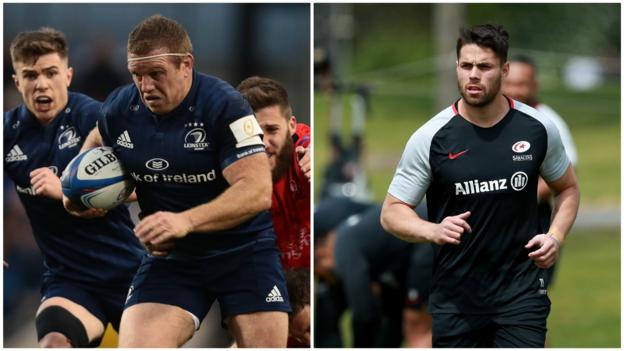 Cronin has recovered from a calf injury as Leinster, aiming for a record fifth title, are unchanged from the semi-final win over Toulouse.

Mark McCall makes two changes from the semi-final with Will Skelton joining George Kruis in the second row.

England forward Maro Itoje replaces Michael Rhodes - who is out with a back injury - at blindside flanker alongside Jackson Wray and Billy Vunipola in the back row.

EPCR European Player of the Year nominees Alex Goode and Mako Vunipola start at full-back and loose-head prop for Saracens.

England captain Owen Farrell is at fly-half and his international team-mate Jamie George starts at hooker, while Brad Barritt will lead the side from the midfield.

Rob Kearney will start for Leinster at full-back with Jordan Larmour and James Lowe occupying the wing berths.

Tadhg Furlong will be making his 100th appearance in a Leinster pack that also includes Sean O'Brien, who will be playing his final European game for the province before his move to London Irish.

Sarries have won all eight of their Champions Cup matches this season and are looking to add to the titles they won in 2016 and 2017.

The final comes at the end of a trying two months in which Saracens' management of the salary cap has come under scrutiny and Billy Vunipola defended Israel Folau's controversial social media post.

Leinster have not lost a European final in five attempts, having won the Champions Cup four times and Challenge Cup once, and head coach Leo Cullen does not want his side to lose sight of that.

"It is a fine balance, you can't be just thinking about the opposition," he said.

"You need to understand what makes Leinster a hard team to play against and what it took to get us to a final in the first place."

Both Saracens and Leinster could still win domestic titles too, with the Premiership and Pro14 semi-finals taking place later this month.

"These games turn on small moments, it might be a magical moment," said McCall. "We've got to be ready to take advantage of those."