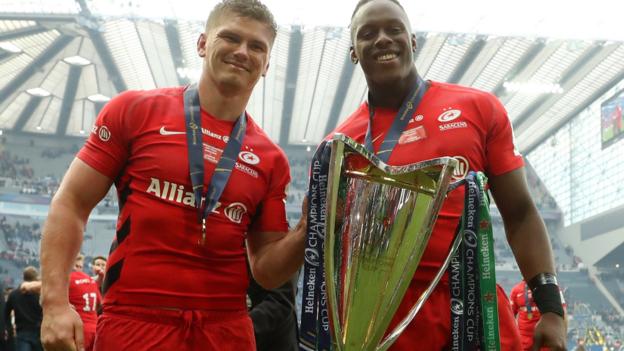 Saracens came from behind to win their third European title in four years with a 20-10 victory over Leinster in the Champions Cup final at St James' Park.

The Irish side held a 10-point lead until the 39th minute but Sarries drew level when Sean Maitland's try cancelled out Tadhg Furlong's opener.

Both defences stood firm after the interval but Owen Farrell kicked Saracens in front just before the hour.

Victory was sealed when Billy Vunipola crashed over from the back of a scrum.

Farrell kicked the conversion as the Londoners scored 20 unanswered points and put in a dominant second-half performance, despite losing both their starting props to injury in the first half.

Saracens - who become the first English side to win three Champions Cups after ending their European campaign unbeaten - will play a Premiership semi-final later this month as they continue to pursue the double, while Leinster remain on course to defend their Pro14 title.

Farrell wins the battles of the 10s

The 2019 Champions Cup final was dubbed as the battle of the fly-halves as international heavyweights Owen Farrell and Johnny Sexton renewed their rivalry, in front of nearly 52,000 spectators at Newcastle United's home ground.

Both players were 100% successful off the tee but it was Englishman Farrell who was the more influential as Saracens avenged last year's quarter-final defeat.

The England captain produced moments of excellence to draw his side level at half-time, having only conceded seven points with Maro Itoje in the sin-bin after waves of relentless Leinster running.

Farrell kicked the penalty to get Sarries on the scoreboard before his deft pass allowed Maitland an easy run-in to score their opening try, in a move BBC Radio 5 Live pundit Matt Dawson believed was "straight off the training ground".

Sexton ran more metres and made more passes than his opposite number after opening the scoring with an early penalty, but Farrell's game management in the critical moments allowed his side to gain an advantage.

The trophy's journey back to England was all-but confirmed when Vunipola dived over with 13 minutes remaining as the England forward continues to impress after a controversial few weeks.

Saracens will be hoping Vunipola's late injury to his left shoulder is not too serious as they return to domestic rugby looking to claim more silverware.

With just a minute remaining of the first half, the plan for defending champions Leinster had been effective.

The Irish province were more mobile at the breakdown and they looked to bully Saracens into submission up front, as the north London side lost props Mako Vunipola and Titi Lamositele to injury as early as the 29th minute.

Itoje was sent to the bin for his part in an accumulation of penalties close to the Sarries line just a minute later, before Furlong powered over from close range for the game's first try.

But when Saracens - with captain Brad Barritt leading from the front - regained their composure, Leinster found it difficult to contain their fast and fluid game.

Saracens made 12 offloads compared to Leinster's four as they looked to keep the ball alive and stretch the game with strike runners Liam Williams and Maitland.

The English side were more clinical in the right areas, and while Leinster had 56% possession, they struggled for creativity and were unable to penetrate Saracens' defence - scoring only three points while Sarries had 15 players on the pitch.

Saracens set to dominate for years?

Most of the team will be around for several years yet. It's a ridiculously talented squad with great coaches and infrastructure. They have been absolutely brilliant today.

At 10-0 up Leinster looked in control, but in a week of sporting comebacks, Sarries dug deep, scoring a brilliant try through Sean Maitland. In the final quarter Sarries were astonishingly relentless and Billy Vunipola's powerful try was the killer blow as Leinster ran out of steam.

It's three Champions Cups in four years for Saracens and, given the hunger and age of this squad, this legacy will only grow.

Man of the match - Brad Barritt

'It's a game of small margins' - what they said

Saracens fly-half Owen Farrell said: "It's a massive occasion for the whole club. It's not just about the lads on this pitch, everybody that's behind the scenes makes this club what it is.

"We were playing against a really good team who've got to back-to-back finals and they tested us. But this is a tight-knit group and that's what makes us good.

"Billy's played well and that's what he does on a regular basis. It's not just off-field stuff, it's other things as well and we've allowed it to make us tighter. You saw that today."

Leinster fly-half Johnny Sexton said: "It's a game of small margins. We were 10-3 up and had the ball in their half and decided to go for an attacking play.

"I thought we could have won it and scored ourselves which would have put the foot on their throat, but they are a champion side and they scored instead.

"At the start of the second half we started really well but we didn't take our chances close to their line. They made their pressure tell and we didn't.

"There were a few decisions that didn't go our way and we felt there was a knock-on before that second try."